WWE Raw roundup: The League of Nations is born 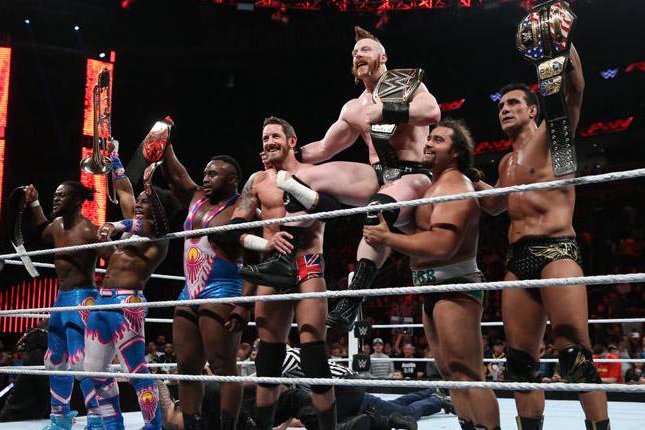 Sheamus and the League of Nations, along with The New Day, stood tall over Roman Reigns, Dean Ambrose, and The Usos on Monday night.

Monday’s Raw from the CONSOL Energy Center in Pittsburgh, PA was all about rebuilding the destruction that WWE’s creative team has done to Sheamus, and they did a pretty good job.

With about as much heat as a refrigerated gallon of milk, Sheamus needed something to really establish himself as the top heel in the company as champion, and I think what happened on Monday night was a step in the right direction. Of course, it’ll depend how the creative team books Sheamus from here on out, but I can really see fans getting behind Roman Reigns now with Sheamus on top; or at least getting behind Reigns a little bit easier than they may have if Seth Rollins never got injured.

We’re two weeks from TLC, and the card is already shaping up to be pretty good. It has a chance to be one of the better, and underrated, shows of the year. I’m looking forward to it.


Roman Reigns and Sheamus continued their feud – which included a WWE World Heavyweight Championship match in the… 10 o’clock hour? Yeah, the WWE gave away their TLC pay-per-view main event to a certain extent, and Reigns and Sheamus would fight with the title at the end of the second hour of the program, clearly setting up some kind of false finish or a finish mired in shenanigans. And that’s exactly what happened. An added stipulation made it necessary for Reigns to defeat Sheamus in under five minutes and 15 seconds, or else he would lose the match and his friends, Dean Ambrose and The Usos would lose their respective title shots at TLC in two weeks.


However, while I usually dislike it greatly when WWE does this, at least the reasoning behind this made a little bit of sense to which the audience could follow. We now have a new stable in WWE that isn’t exactly affiliated with The Authority or The New Day, and it’s called the League of Nations. It includes: Sheamus, Alberto Del Rio, Rusev and King Barrett.

Before Sheamus cashed in his Money in the Bank briefcase at Survivor Series, he, Rusev and Barrett were sort of a trio, as they participated in many six-man tag matches and were in each other’s corners during single and tag team matches. The addition of Del Rio is great and really makes this stable look even stronger. I also like the name of the group, which pretty much was a no-brainer.


The League of Nations and The New Day teamed up in the night’s main event, after that schmozz of a title match, and took on Reigns, Ambrose and The Usos in a 7-on-4 Handicap match. Sheamus pinned Ambrose, so it looks like they’re building him back up as a credible champion. It’s been nine days since he captured the WWE World Heavyweight Championship and he’s been booked, though still a boring character, better than he has since he returned from injury earlier this year. And now with the League of Nations, I wouldn’t be surprised to see Sheamus hold the title until WrestleMania.

Sheamus and the League of Nations, along with The New Day, ended the program strong after taking out Reigns and Ambrose. I think this is the best move for Sheamus, because alone, he clearly wasn’t getting any type of positive reaction. At least with a group, they can all build off of each other and make each other look even stronger.


Speaking of the WWE Tag Team Champions, The New Day were the night’s MVPs. They not only made an appearance during the opening sequence of the show, palling around with Sheamus, but they also were on commentary for the No. 1 contender’s match for their WWE Tag Team Championships between The Usos and Lucha Dragons. Then they followed that up with an appearance in the night’s main event alongside the League of Nations. Someone in WWE is paying attention.

The highlight of their night had to be their promo in the ring with the Pittsburgh Steelers’ Terrible Towel.


The Dudley Boyz and Wyatt Family are now engaged in a brutal war, and that may not be good news for Bray Wyatt. Yes, we got the return, at least for one night, of the “Innovator of Violence” Tommy Dreamer, and it was great seeing him back in a WWE ring again, but I can’t help but wonder how Wyatt’s health is after taking a nasty fall off the ring apron onto a table to the outside, landing on his left arm and looking like he really injured it.


Wyatt is currently scheduled to face Bubba Ray Dudley in one-on-one action on SmackDown, which is taped tonight. We’ll know if his arm is seriously injured if someone else wrestles in his place, or if the match is just nixed altogether.


Rusev and Lana were once again back together on television for the first time in a long time.  WWE thought Miz TV would be the best segment for them to return as an on-air couple, but it didn’t last for long. While the duo was busy making out, Ryback’s music blared through the loudspeakers and The Big Guy made his way to the ring for a match.


You see, it makes us think he was interrupting their make-out session, but he was just on his way to the ring for his match against Rusev. Interesting. I guess.

The match was nothing special, as is often the case when these two are in a match together, either with a team or one-on-one. This could set up to be a good feud, but I’m just not impressed with either of them right now. The end of the match wasn’t bad, but it just begs the question, “Why even have a match?”

Ryback hit Rusev into the steel steps on the outside of the ring, and Lana appeared to be standing a little too close to those steps, and Rusev’s force caused them to lunge into her upper thigh. Rusev, concerned with his fiancé, took the countout loss to tend to Lana. This certainly isn’t the end of the beef between the two behemoths.


We finally have a little more character development in the Divas division, as Charlotte and Becky Lynch went one-on-one in a non-title match. Charlotte’s father, Ric, was there to witness it, and some of the dirtiest player in the game’s tactics must have rubbed off on his daughter.

Charlotte faked an injury and while Lynch showed some compassion, she rolled her up for the pin. Lynch wasn’t too happy, and Charlotte basically said it was tough love and she’s trying to help her. I don’t mind Charlotte becoming a heel if that’s where this is heading. The division still needs a huge spark to really get going, so maybe this is the right direction. Though, a face Charlotte and heel Sasha Banks would be the premiere feud for the division at this point.

Paige was on commentary during this match, but nothing of note really came out of it.


I can get behind a segment like this every week. Adam Rose’s “The Rose Bush.”

What’s really irritating is that there was no Kevin Owens on the show. While there were mentions of him, there wasn’t any reason given to why he wasn’t on television. Let’s hope he doesn’t have some sort of injury that the company is hiding for the time being.

·         Ryback d. Rusev by countout after Rusev stayed outside the ring to tend to Lana, who fell.

·         The Dudley Boyz and Tommy Dreamer vs. The Wyatt Family [Luke Harper, Erick Rowan and Braun Strowman] ended in a No Contest after the referee threw out the match as both teams brawled in the ring.

·         #1 Contender’s Match for the WWE Tag Team Championships: Lucha Dragons and The Usos ended in a double disqualification after The New Day interfered.

·         Non-Title: Charlotte (c) d. Becky Lynch by pinfall via a schoolgirl. Charlotte faked an injury, allowing her to capitalize and pin Lynch.