WWE SmackDown: AJ Styles’ pick for his next opponent backfires 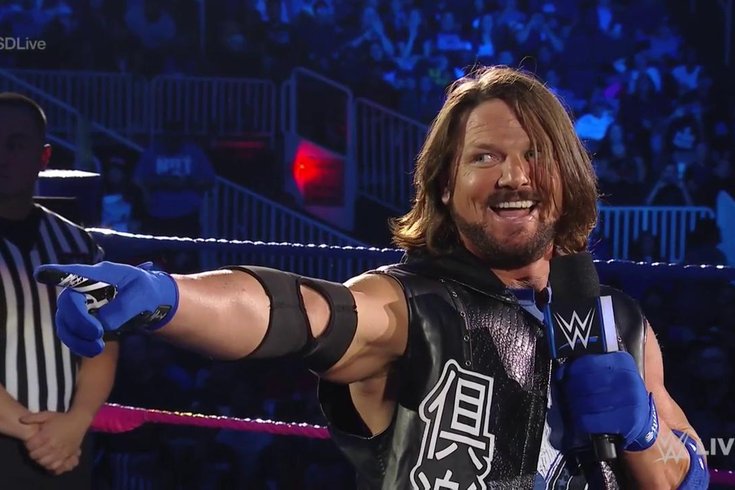 Hot off the heels of a very good No Mercy pay-per-view on Sunday night, SmackDown invaded the SAP Center in San Jose, Calif. With no pay-per-views in sight until November’s co-branded Survivor Series, the importance placed on television the next few weeks was in full effect. We’re getting a World Title match next Tuesday, a Women’s Championship match November 8 from Scotland and I’m sure we’ll continue to see feuds build and maybe end on the road to Survivor Series.

And it was pretty cool to see the return of the picture-in-picture during commercial breaks where the audience could still follow the action on television.

James Ellsworth gets the biggest win of his career

Well, it looks just as quickly as John Cena returned from a short hiatus just one month ago in Philadelphia, he’s just as quickly gone as he didn’t make an appearance on SmackDown Tuesday night. Instead, AJ Styles got to brag about beating both Cena and Dean Ambrose at the same time at No Mercy, retaining his WWE World Championship in the process.

Ambrose wouldn’t take much for long and came out to confront the champion. Styles was set to pick his next opponent, and he selected future Hall of Famer, James Ellsworth.

There's nothing not great about James Ellsworth. #SDLive pic.twitter.com/aQKj4CjZye

But before Styles was able to make a mockery of the match, general manager Daniel Bryan appointed the Lunatic Fringe the special referee for the contest. Bryan also ruled that if Styles put his hands on Ambrose, he’d face a fine or suspension. And that enabled Ambrose to do whatever he wanted during the match.

It didn’t matter if Styles had Ellsworth beaten and pinned, Ambrose always trumped him somehow. He took out his cell phone and answered a call as Ellsworth was tapping out and he went outside the ring for a drink. That clearly got under the skin of Styles, but he was helpless as Ambrose hit him with Dirty Deeds twice and counted the three for what is without a doubt the biggest victory for Ellsworth to date.

Ellsworth was hit with a gnarly Styles Clash near the end of the match and it looked like he really caught his neck in a precarious position, but he seemed fine after the show during his appearance on Talking Smack. We’ll monitor that situation closely, because Ellsworth will be back on SmackDown again next Tuesday.

Actually, I don’t think he even knew what happened after the match.

On WWE Network’s Talking Smack, Ellsworth was granted a WWE World Championship opportunity against Styles next Tuesday night by the general manager.

BLOCKBUSTER NEWS by @WWEDanielBryan: JAMES ELLSWORTH will get a WORLD TITLE MATCH vs. @AJStylesOrg NEXT WEEK on #SDLive! #TalkingSmack pic.twitter.com/JHvxMlsvqt

Can’t wait for that one.

Ziggler takes on the Spirit Squad

Before Dolph Ziggler could celebrate his Intercontinental title win in front of the SmackDown crowd, the former champion Miz, along with Maryse, made their way down to the ring and offered to perform a funeral for the title. Ziggler proceeded to show a still of Miz crying after losing the title to him, which led to the Spirit Squad coming back out and engaging in a two-on-one handicap match with Ziggler.

Before long, Miz interfered and caused the disqualification as the three-on-one assault continued. The SmackDown Tag Team Champions Heath Slater and Rhyno ran down for the save. It’ll be interesting to see if the Spirit Squad sticks around a little bit longer.

SmackDown makes a huge challenge to Raw for Survivor Series

If that’s what we have to look forward to at Survivor Series along with Goldberg vs. Lesnar, I think it’ll be one hell of a pay-per-view.

What happened to Kane?

In a rather lackluster main event, Randy Orton and Kane teamed up, despite being hated enemies just last year, and took on the duo of Bray Wyatt and a returning Luke Harper. Orton and Kane looked like a pretty good team together, but it wasn’t until the end of the match that had the audience questioning whether Kane was really invested into harming the Wyatts.

Orton was going for a tag when the lights went out. In true Wyatt form, Kane was nowhere to be found when the lights came back on and Harper was standing there in his place. Wyatt hit Sister Abigail on Orton for the three-count and second win in three days over his rival.

And will Curt Hawkins ever wrestle?

• 2-on-1 Handicap Match: Dolph Ziggler (c-IC) d. Kenny Dysktra/Mikey Mondo by disqualification after The Miz interfered. Heath Slater and Rhyno came out for the save.

• Naomi d. Carmella by pinfall via a rollup. Nikki Bella ran her off after the match.

• Jimmy Uso d. Chad Gable by pinfall via a rollup after Jey Uso helped Jimmy pin Gable with his feet from the outside of the ring.