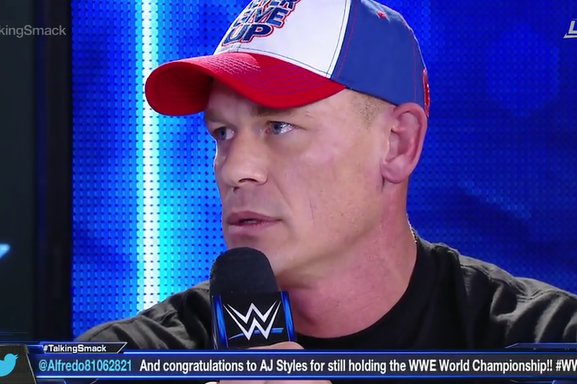 The WWE World Championship was on the line Tuesday night as SmackDown Live emanated from Cleveland’s Quicken Loans Arena, which is also known as the home of the NBA World Champion Cleveland Cavaliers. A little under two weeks before SmackDown’s next pay-per-view, we would find out together if AJ Styles or Dean Ambrose would be heading into No Mercy as the WWE World Champion.

But maybe the biggest story to come out of SmackDown was the storyline surrounding the Intercontinental Championship, which all of a sudden is at the forefront of the list of matches I can’t wait to watch on October 9. And we saw some more storyline development that we don’t see as much on Monday nights anymore.

The WWE World Championship was on the line as AJ Styles defended the title against the former champion, Dean Ambrose, almost two weeks before the two would tango in a Triple Threat Match with John Cena at SmackDown’s next pay-per-view, No Mercy.

Cena would join the commentary table, which of course would come into play late in the match. Styles and Ambrose fought a valiant contest for the gold, but it was Styles who provoked Cena to get involved after he randomly attacked him while outside the ring. Clearly upset, Cena tried getting in the ring but was held in check by the ref [and the ropes] as Ambrose rolled up Styles for the two-count. Ambrose ran outside and decked Cena once again, only to get back into the ring and get rolled up for good by Styles.

After the match, Cena got in the ring and engaged in a shoving match with Ambrose before the Lunatic Fringe teased hitting Dirty Deeds before Cena countered with the Attitude Adjustment. Styles then tried getting a one-up on Cena, but he received an Attitude Adjustment as well for his troubles.

After the show, Cena joined the general manager Daniel Bryan and Renee Young on WWE Network’s “Talking Smack” and had some very critical words for Ambrose.

"If Dean wants me to care about him at #WWENoMercy, he'll have to step up .. or step ASIDE!" - @JohnCena #TalkingSmack pic.twitter.com/X5VkFgtMeA

“Talking Smack” great. If you’re not watching it after SmackDown goes off the air, you’re missing out.

The Miz’s “Homecoming Celebration” was actually a perfect pro wrestling segment, complete with a video package of just how “awesome” the Intercontinental Champion really is.

The Cleveland native threw himself a homecoming celebration, complete with his parents in the building. But Miz quickly turned his attention to Dolph Ziggler’s parents who were also in the building, referring to their son as a loser before Ziggler’s music hit and he came to the ring.

Ziggler had some great promos during his feud with Ambrose, and he’s had good ones during his feud with The Miz. But on Tuesday night, he gave perhaps his most emotional promo, practically begging The Miz for another shot at the Intercontinental Championship or else he would give up his career in WWE. He said he loves performing in the ring and when fans keep asking him over and over why he still competes even though he just loses big matches, he just can’t stop competing in that ring. So it seems fitting he’s putting his career on the line for one more shot at glory.

Not only did this angle have a feeling of “real life” to it, but it gave a lot more importance to the Intercontinental title, which probably is at its peak of importance since Daniel Bryan held it after WrestleMania 31 over one year ago.

The show opened with Randy Orton promo in the ring calling out Bray Wyatt. Wyatt appeared on the big screen and told Orton to come find him. So Orton obliged, and would eventually find him.

The Viper followed a few arrows and signs before reaching his prey, attacking Wyatt from behind and then sitting and donning the sheep mask the Wyatt Family has made popular the last few years.

EXCLUSIVE: The #SmallButFierce @AlexaBliss_WWE has no remorse for attacking @BeckyLynchWWE on @WWE #SDLive! pic.twitter.com/ICHmbK8Kjl

The SmackDown Women’s Champion was set for action, but her challenger at No Mercy attacked her from behind. There was no match, but Becky Lynch addressed Bliss on “Talking Smack” on the WWE Network, saying she’s fought half her life for the title and she wasn’t going to let Bliss take it away from her.

The Usos continue to break out

In an eight-man tag team match, Jimmy Uso made SmackDown Tag Team Champion Heath Slater tap out to the Tequila Sunrise, further building the Samoans’ momentum on the way to their title match at No Mercy. If they don’t win the titles on October 9, I’ll be very surprised.