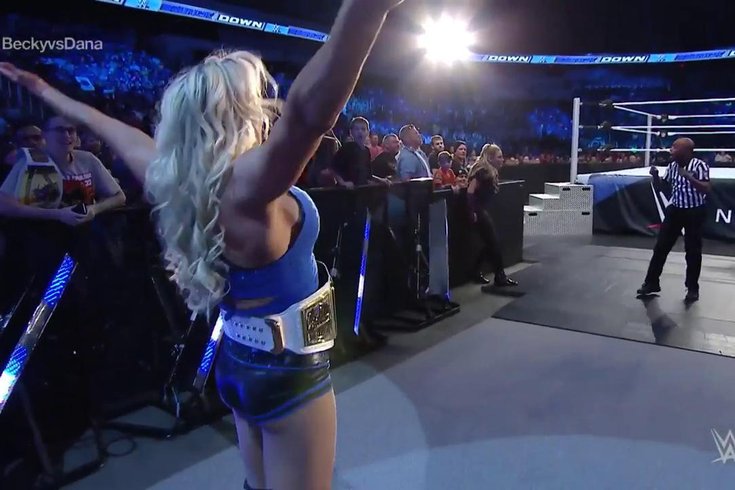 Charlotte currently doesn’t have an opponent for Money in the Bank. Is there a reason for that?

With just over one week until Money in the Bank, which could arguably be the best pay-per-view card of the calendar year so far, WWE invaded Wichita, Kan. and brought us SmackDown from the Intrust Bank Arena Thursday night.

The emphasis on Money in the Bank has been heavy this year, but that’s nothing new. It’s become the fourth most important pay-per-view of the year behind WrestleMania, SummerSlam and the Royal Rumble. On Thursday’s edition of SmackDown, we had plenty of storylines to keep track of heading into the big event next Sunday.

The Club meets Enzo and Cass

The Club opened the show with a promo in the ring about how AJ Styles and John Cena going one-on-one at Money in the Bank is a dream match worthy of WrestleMania. That’s what many are saying, and they’re right. Who would’ve thought we’d see Styles vs. Cena ever, much less not at WrestleMania?

While the promo focused mainly on Styles, he gave a shoutout to his Club teammates, Luke Gallows and Karl Anderson, who will look to gain the WWE World Tag Team Championships at Money in the Bank in a Fatal Four Way match against The New Day, Enzo Amore and Big Cass, and The Vaudevillains.

Speaking of that match, Enzo and Cass interrupted The Club to make sure they weren’t overlooking them. This duo is hot on the mic and the fans love them. I don’t think there’s been a tag team this over, along with New Day, in a long, long time. The emphasis on tag team wrestling in WWE has really helped the teams, as well.

Amore and Anderson went back and forth on the mic, with Anderson bringing up the fact that he used to be a manager at Hooters. Amore proudly acknowledged that fact, and it was awesome.

“You two wanna run the dice against us? We will beat the crap out [of you]! Money walks and money talks. You should pay attention.”

Enzo and Cass then fought Gallows and Anderson in a tag team match for the opening match of the night.

The WWE World Tag Team Champions were ringside for commentary during the match, and before a commercial break The Vaudevillains came out on the ramp as well. After the break, the action got fast and furious as Aiden English and Simon Gotch walked toward the ring ready to attack Big Cass, but The New Day confronted them and Big E came launching a clothesline from behind starting a full-fledged brawl among all the teams. The match was ruled a No Contest.

Ambrose and Jericho continue their rivalry

Speaking of the Money in the Bank Ladder Match, the other two participants took part in Thursday night’s main event as Dean Ambrose and Chris Jericho met for the “first time ever” one-on-one on SmackDown.

These guys have good chemistry that just didn’t translate to the audience in their last match at Extreme Rules, but their match for the main event of SmackDown this week was really good for television. Jericho played his role as heel fantastically for the duration of the match and eventually got the win over Ambrose after hitting him with The Codebreaker.

After the match, Jericho set up a ladder in the corner, but Ambrose threw him into it and then grabbed the ladder and threw it on his back. Ambrose set up the ladder, climbed it, and delivered an elbow drop to Jericho and stood tall to end the program. Jericho may have won the battle, but he’s far from winning the war.

I had somewhat of an epiphany Thursday night while watching Dana Brooke and Becky Lynch wrestle each other one-on-one. With Natalya in Lynch’s corner and the WWE Women’s Champion Charlotte in Brooke’s, I realized that WWE has more than six capable women to participate in their own Money in the Bank Ladder Match at the pay-per-view.

It’s been almost one calendar year since the Divas Revolution began, and it makes perfect sense for this year’s Money in the Bank event to feature a Ladder Match for the Women’s Championship briefcase.

I’m sure WWE has thought about this – they’d be completely stupid not to – so I’m wondering what the exact reason is why they won’t do one for the women, at least not this year. They don’t need to take high-risk bumps off the ladders [neither do the men, either], and they’ve had two Money in the Bank Ladder Matches before when there were two World Titles a few years ago. And there’s plenty of talent to have a really good women’s ladder match in WWE today.

Would a women’s ladder match get overshadowed by the rest of the card? Maybe. That’s the only reason I could think about not doing one this year. With the WWE World Heavyweight Championship match between Roman Reigns and Seth Rollins and Styles and Cena going one-on-one for the first time ever, along with the Fatal Four Way Tag Team Championship match and the other Money in the Bank Ladder Match, a women’s Money in the Bank Ladder Match could be overkill.

But, it’s the perfect time to do it. Maybe we’ll get surprised this weekend or even Monday on Raw. Stay tuned.

As for the Lynch-Brooke match, the Irish Lass Kicker was able to make Brooke submit to her Dis-Arm-Her submission hold moments after Charlotte and Natalya were ejected from ringside.

Cesaro and Sami Zayn teamed up for a tag team match against Alberto Del Rio and Kevin Owens in the second match of the night. During the match Owens and Zayn disappeared brawling backstage and then eventually would come back to the ring.

Del Rio would hit the Double Stomp on Cesaro, but Owens tagged himself in and got the pin. Stealing wins is what Owens does best.

Apollo Crews has been noticeably absent from television recently after being attacked by Sheamus and then being given a pep talk by Big Show. Backstage on Thursday night, Sheamus was bragging about his role in the new Teenage Mutant Ninja Turtles movie when Crews approached him. Crews didn’t say a word and Sheamus laughed at him for being “starstruck” before Crews punched him into tomorrow.

I’m interested to see how a match between these two would look. I’m sure we’ll be getting that sooner or later.

• Enzo Amore/Big Cass vs. Luke Gallows/Karl Anderson ended in a No Contest after all four teams involved in the Money in the Bank Fatal Four Way match began brawling in the ring.

• Kevin Owens/Alberto Del Rio d. Cesaro/Sami Zayn by pinfall after Del Rio hit the Double Stomp on Cesaro, then Owens tagged himself in and pinned him.

• Becky Lynch d. Dana Brooke by submission via the Dis-Arm-Her.

• Baron Corbin d. Kalisto by pinfall via the End of Days.

• Chris Jericho d. Dean Ambrose by pinfall via The Codebreaker.