Your lungs are really amazing. An anatomy professor explains why 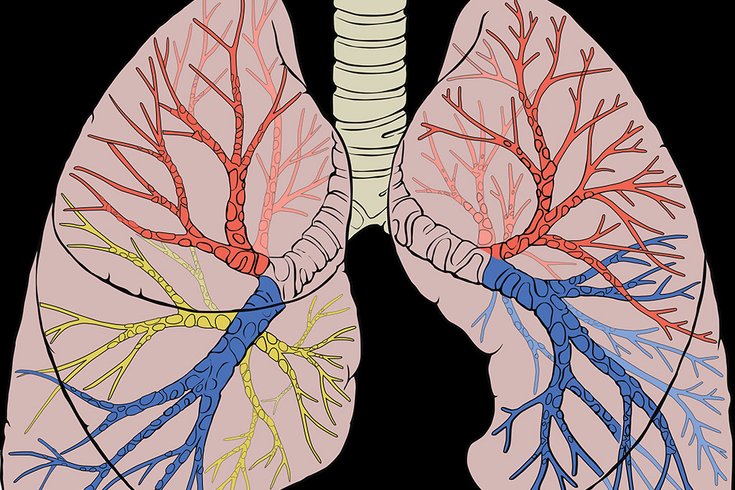 Lungs are remarkable organs that continuously achieve amazing feats, which they do so well that we take them for granted, except when their function is diminished. It all happens in a space inside your chest, divided in two and reduced by the presence of the heart, the great vessels and the esophagus.

With Supreme Court Justice Ruth Bader Ginsburg having recently returned to the court after surgery for lung cancer, I have been asked a lot of questions about the lungs, as I am a professor of anatomy.

Many lung cancers are not operable, but to treat some types of lung disease, such as early stages of lung cancer, a surgical treatment called a lobectomy may be performed. In this operation, a lobe of a lung (your right lung has three lobes, your left lung has two) is removed. Afterward, the other lobes expand to adapt and compensate for the missing tissue, allowing the lungs to work as well or better than they did before.

In addition to being highly efficient organs, the lungs are beautifully complex in their structure. I can’t help but wonder: If we appreciated them more, would we be more proactive in taking care of them?

The primary function of the respiratory system is to bring oxygen into our lungs. There it is exchanged for a waste product, carbon dioxide, which is then removed from the body.

Several weeks following conception, the work of the lungs is performed by the placenta, a structure outside our fetal bodies where our blood exchanges carbon dioxide and oxygen with the maternal blood of the uterus.

Before birth, we just practice respiratory movements, moving amniotic fluid instead of air in and out of the lungs.

Each day, 5,000 gallons of air are transported through airways leading into and extending throughout the lungs.

Within seconds after the umbilical cord is cut, a buildup of carbon dioxide causes newborns to gasp for breath to exchange it for oxygen, an activity that will continue until our death. The average person breathes some 13 million cubic feet of air during their lifetime.

During quiet activity, such as bed rest or sitting, we take eight to 16 breaths per minute, each breath inhaling about a pint of air containing 21 percent oxygen and a small amount of carbon dioxide for about two seconds. Then for three seconds, we exhale the same amount of air, but it now contains 16 percent oxygen and a 100-fold increase in carbon dioxide. In other words, you spend about 40 percent of your life drawing air in, and 60 percent of your life expelling it.

YOUR LUNGS, BY THE NUMBERS

Each day, 5,000 gallons of air are transported through airways leading into and extending throughout the lungs. The airways branch and diminish in size 22 times. Almost of all this occurs within our lungs, with these airways reaching a combined length of 14,900 miles.

About 2,600 gallons of the transported air are delivered into and removed from 300 million tiny, thin-walled, hollow sacs, or alveoli, that provide an enormous surface for the exchange of oxygen, required by all our cells, for carbon dioxide, a waste product from them. This is an area varying in size between half and most of a regulation tennis court.

This immense area is contained within two lungs, each only somewhat smaller than three, 1-liter bottles. The left lung is 10 percent smaller than the right, due to the left-sided position of the heart.

The alveoli are tightly surrounded by blood vessels, or capillaries, so small that red blood cells continuously pass through them squeezed into a single row as they exchange carbon dioxide for oxygen.

The capillaries of the lung receive an immense blood supply, equal to that distributed to all other parts of the entire body. The alveoli expand and contract 15,000 times a day. During activity, the rate of respiration doubles – and in extreme activities triples – and the amount of air reaching the alveoli increases three to five times. Breathing deeper and faster uses lung capacity that’s held in reserve while at rest. Stress can also result in deeper and faster respiration.

YOUR LUNGS AT WORK

The air we breathe is far from clean, however, and one of the primary jobs of the respiratory system is to “condition” the air before it reaches the air sacs deep inside your lungs.

Indoor air pollutants can have two to five times more pollutants than outdoor air. (Have you observed and changed filters on your heating/AC system recently?)

Foreign and possibly harmful substances are filtered from in-flowing air and removed by several means, including nasal hairs and sticky mucus lining the airways that is produced at a rate of about a quart a day. It contains antimicrobial agents that help to neutralize harmful germs and many viruses.

Importantly, hair-like projections on cells lining the airways, called cilia, move the soiled mucus out of the lungs and air passages to the throat to be swallowed and destroyed by stomach acid.

Pollutants reaching the alveolar gas-exchanging membranes are removed by specialized cells called phagocytes and macrophages that ingest particles to move most to be carried away via lymph vessels and nodes. However, much of the black carbon is merely moved to non-exchanging portions of the lung.

In addition to conditioning air for the alveoli, ventilation of the lungs helps to cool the body down when it is overheated. About 7 percent of body heat is removed via evaporation from airways inside and outside the lungs. Eleven ounces of water per day are lost as water vapor. Three percent of body heat is lost by heating air below body temperature as the lungs are ventilated.

Other amazing functions of the lungs include controlling the acid-base balance (pH) of the body as a whole by selectively retaining or eliminating carbon dioxide. In order to be ventilated for gas exchange, the lungs act as bellows. The propulsion of air from the lungs enables the larynx to serve as a “voice box,” vibrating the vocal cords to produce the tone that is modified by the tongue, teeth and lips to produce our voice for interpersonal communication and for singing. This air output also allows us to blow up balloons or play wind instruments.

Air drawn in by expansion of the lungs passes over the olfactory areas of the nose, enabling our sense of smell. The lungs also act as “packing foam” inside the rib cage, supporting and protecting the vital heart that delivers half of its output to the lungs, and the other half to the rest of the body.

THE DARK SIDE OF THE LUNGS, AND OF THEIR CARE

While the lungs were a pristine pink at birth, our lungs gradually darken to a gray and mottled appearance due to these carbon particles, much of which remains in place, usually with no detrimental effect. Larger, irritating particles are commonly “blasted” away by reflexive coughing and sneezing. This air conditioning system is compromised in smokers, whose airways lose cilia and their directional coordination, and so must revert to coughing as a major means of pollutant removal.

Smokers’ lungs darken faster, becoming more mottled, and take on an orange tone due to nicotine and brown tars. Prolonged exposure to these carcinogens causes chronic bronchitis, emphysema and cancer in many parts of the body, but especially around airways just inside the entrance to the lungs. In emphysema, the alveolar structure of the lungs collapses, especially in the upper lung, making it difficult to fully exhale.

Take a deep breath and consider all the miraculous activities your incredible lungs are performing.