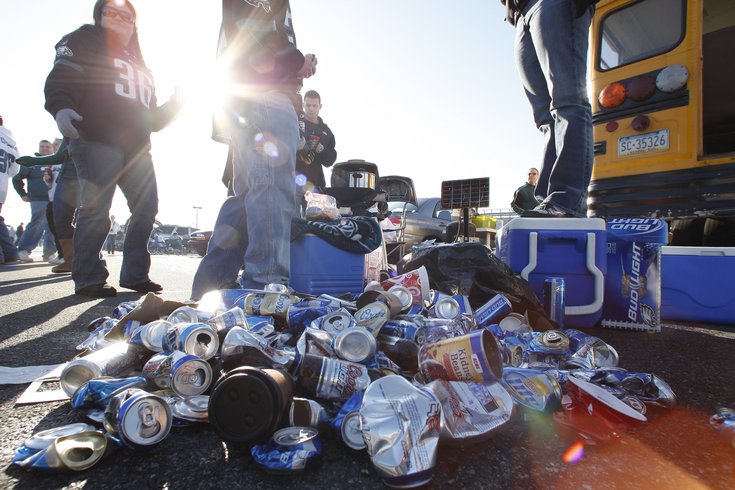 Philadelphia Eagles fans tailgate near a pile of empty drink cans before an NFL football game against the Denver Broncos, Sunday, Dec. 27, 2009, in Philadelphia.

Coaches are predictable and boring, hoping not to giveaway anything for when the regular season starts. The starters usually come out by the end of the first quarter. The games offer fans nothing more than an opportunity to watch in horror as a star player gets injured and then overreact on sports radio phone lines.

I'll be watching Thursday night's Eagles/Packers matchup only because I need something else after months of a bad Phillies team, the fantasy of LeBron joining the Sixers and the Flyers' new prospect getting an infection on his gosh darn face.

I, like most of you, will also be equipped with alcohol, because there are few other ways to enjoy bad football. (A family member being a player with hopes of making the roster, for example, is another way.) Here is a drinking game that will make enduring a very bad NFL preseason game actually fun:

Sip — Announcer doesn't know the name of a player, mispronounces it or has to correct himself

Sip — Announcer tries to justify the importance of preseason football

Finish your drink — Anyone mentions CTE, brain injuries or any of the underlying and inherently unhealthy elements of playing football

Chug - Someone other than a quarterback throws a forward pass

Finish your drink - A quarterback catches a pass

Sip — A Kicker or punter does anything other than kick or punt (tackle, run with the ball, etc.)

Sip — A starter is injured

Sip — You find yourself cheering, but genuinely not sarcastically

For heaven's sake just go to bed, it's the preseason after all — You fall asleep