The creator of 'Broad City,' who grew up in Chester County, co-wrote and stars in the series, which shines light on issues impacting lesbians and people of color in the 1940s 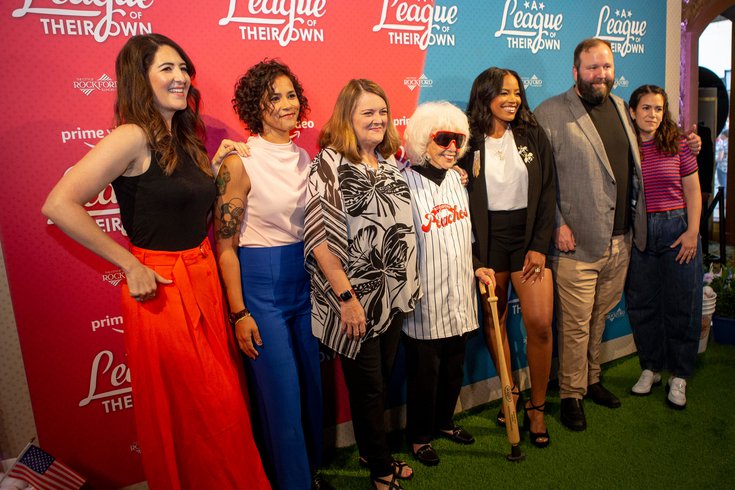 'A League of Their Own,' which Abbi Jacobson co-wrote and stars in, premiered on Amazon Prime Video on Friday. The eight-episode series is a reboot of the 1992 sports film of the same name. It tells the story of a Black female baseball player who can't find a team that will accept her.

Abbi Jacobson's reboot of the classic 1992 baseball film "A League of Their Own" premiered on Amazon Prime Video on Friday.

The eight-episode series reimagines the Rockford Peaches, a fictionalized version of the real-life team that played in the All-American Girls Professional Baseball League, which also was at the center of the movie's plot. With hundreds of Major League Baseball players fighting in World War II, and even more minor league players, the AAGPBL debuted in 1943, created by baseball executives as a way to keep people coming to stadiums – and to keep generating revenue for team owners.

Jacobson, who grew up on the Main Line in Wayne, Chester County, previously earned acclaim as the creator of the Comedy Central series "Broad City." In addition co-writing "A League of Their Own," Jacobson stars as Carson Shaw, a catcher who plays for the Peaches while her husband is deployed in the war.

The foil to Jacobson's Carson is Max Chapman, played by Chanté Adams, a talented Black baseball player who can't play in the AAGBL. While Jackie Robinson broke the MLB's color barrier in 1947, the All-American Women's League never integrated before it disbanded in 1955. For the duration of the season, Max and her best friend Clance Morgan, played by Gbemisola Ikumelo, set out on a journey to find a team that will take her.

The role of Jimmy Dugan, the Peaches' drunken surly manager, famously portrayed in the movie by Tom Hanks and best remembered for the line, "There's no crying in baseball," is played by Nick Offerman in the reboot. He is not as central to the storyline as Hanks' character had been. But in a nod to the film, Rosie O'Donnell has a cameo role in an episode as Vi, the owner of a gay bar. O'Donnell been Peaches player Doris Miller in the original movie.

"I feel a lot of pressure for a lot of reasons," Jacobson told The Cut. "'A League of Their Own' is people's favorite movie, so there's pressure surrounding making something that's based off of such a beloved piece of IP."

The film, directed by Penny Marshall and starring Geena Davis, Madonna, Lori Petty, O'Donnell and Hanks, premiered to widespread praise from critics and audiences. It grossed more than $135 million and has become one of the most cherished sports films ever.

At the time, critics raved that the film presented a "sentimental," "charming" and "light-hearted" look at a time in American history that's often not highlighted. The movie made its way into the Library of Congress' National Film Registry in 2012.

Because of its widespread praise, it's no surprise that this is the second small-screen attempt to revive it. CBS tried (and failed) a television spinoff of the film in 1993.

Rather than retell the story, Jacobson's reboot aims to present a more realistic version of 1940s America – particularly for lesbians and people of color.

"The movie is a story about white women getting to play baseball," Jacobson told the New York Times. "That's just not enough."

In the weeks leading up to its full-season release on Prime Video, critics have examined the corrective lens of the series, noting that in some cases, Jacobson's reboot trades in some of the light-hearted charm of the original for a more political look at the social climate of the time.

While Max has a storyline dedicated to the barriers faced by Black Americans, another major corrective change to the reboot is an openly lesbian relationship between Carson and Greta, which is established in the pilot episode.

It's also the basis for much of the social media response from those who viewed the series on Friday, many of whom were informed by critics that the show would explore LGBTQ themes.

the first episode of #ALeagueOfTheirOwn was so, so good!! I’m torn between wanting to take my time and savor it, and watching the whole season immediately 🥲

Goodness me, #ALeagueOfTheirOwn is so damn good. I made it through five episodes tonight and if I didn’t have to go to work, I’d be watching the last three right now.

I definitely recommend the show if you were a fan of the movie. It takes all the best parts and builds on them.

Halfway through the first episode of #ALeagueOfTheirOwn and already I have laughed so much. Whoever wrote the dialogue for Max and Clance deserves ALL the awards. I would watch an entire show of just them and I’ve only known them for two scenes.

#ALeagueOfTheirOwn won my heart by the first episode! 🥰

#ALeagueOfTheirOwn I'm 17mins into the first episode, I'm sold! These aren't the Rockford Peaches but they are definitely unique. And with no limits, this is definitely a more mature version.

Many early reviews note the importance of treading lightly around reboots and remakes of beloved stories and characters. These kind of projects have become more popular in recent years, from live remakes of Norman Lear's groundbreaking 1970s sitcoms on ABC, to gaudy, social media-inspired iterations of newer properties like HBO Max's new "Gossip Girl" series. Reboots have to toe the line between loyalty and creativity.

"Attempts to take a property from the '90s and make it feel relevant — even a period piece — can feel tired, or worse, tiresome," NPR noted in its review of the series. "Stick too close to the original and it feels like there's no reason to do it at all; stray too far and it feels like you should have just written an entirely new story instead."

The full first season of Jacobson's reboot of "A League of Their Own" is available to stream on Amazon Prime Video. You can also check out the show's official trailer below.