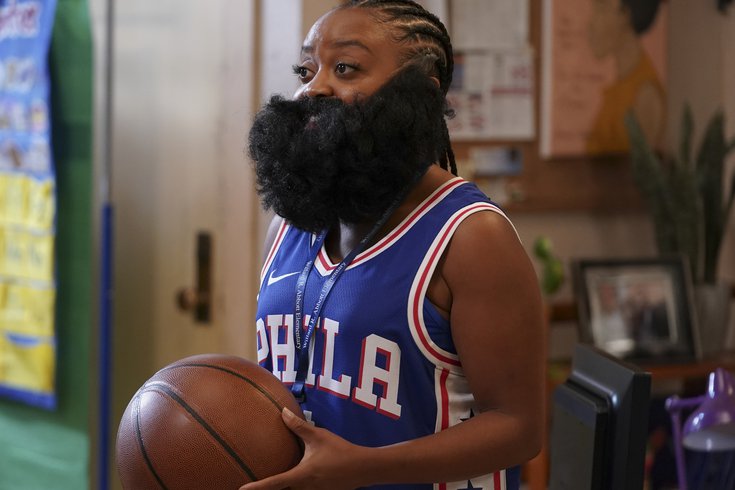 Many of the most beloved sitcoms have holiday-themed episodes, and a certain fan favorite mockumentary set in a Philadelphia public school has finally embarked on that rite of passage during its second season.

The special episode of the Emmy-winning show saw the teachers and students of Abbott Elementary dressed up for Halloween parties at school. The situation quickly devolved into chaos when one student – dressed as Marvel supervillain Thanos – stole bags of candy to pass out to his peers.

Photos teasing the cast's costumes were released a few weeks back, and creator Quinta Brunson made waves online for her character Janine Teague's rendition of a Philly sports star. Sixers guard James Harden posted a photo of Brunson in costume, including a Sixers jersey and the iconic beard, with a laughing face to show his appreciation of the look.

During the episode, Janine even emulated Harden's mannerisms during an interview.

Multiple stars of the show dressed up as Marvel characters, including sassy principal Ava Coleman (Janelle James) who dressed as X-Men's Storm – white contacts and all.

WITH THE WHITE EYES SHES EATING IT #AbbottElementary pic.twitter.com/La4SEjZIM5

Custodian Mr. Johnson, played by William Stanford Davis, unwittingly joined the fray when his costume was mistaken for another Marvel character. He was supposed to be Philadelphia-native rapper Lil Uzi Vert, who has a giant diamond face piercing, but other characters believed the jewel to be the Mind Stone implanted in superhero Vision's forehead.

crying this is literally what twitter was debating #AbbottElementary pic.twitter.com/pqEhH4rbFd

With Wanda, Vision and Thanos all represented, Vision's death in "Infinity War" was inadvertently replicated.

Interestingly enough given all the Marvel references, Brunson herself was at the premiere of the studio's newest film "Wakanda Forever" while the "Abbott Elementary" episode aired on the West Coast.

The child actors were scene-stealing as students once again, with "Baby Thanos" wrongly referencing the inspiration for his costume by exclaiming, "I... am... inedible!" Another student dressed as Mr. Johnson, mini trashcan included, figured out the candy thief mystery and saved the school from sugar-induced hysteria.

Lets give these two young actors a round of applause. Hilarious! 👏🏾 #AbbottElementary pic.twitter.com/WXh5Bzx8NB

There was also plenty of content for those who "ship" Janine and Gregory, two characters embroiled in a flirty will-they-won't-they relationship. Janine changes into a glamorous Marilyn Monroe costume to go to a friend's party, which was a big step for her considering she hadn't socialized much outside of work since her breakup with longtime boyfriend Tariq. Gregory visibly takes notice of the "new" Janine.

Not Ava giving Janine Props! Not Gregory being speechless! 🗣Janine betta SHOW UP and SHOW OUT!!!👏🏽👏🏽👏🏽 #AbbottElementary pic.twitter.com/lzUxjC7Mxb

Those waiting on the edge of their seats for more updates on Janine's and Gregory's relationship, holiday episodes, Philly references, and, of course, laughs, can check out "Abbott Elementary" when it airs Wednesdays at 9 p.m. on ABC and streams on Hulu.