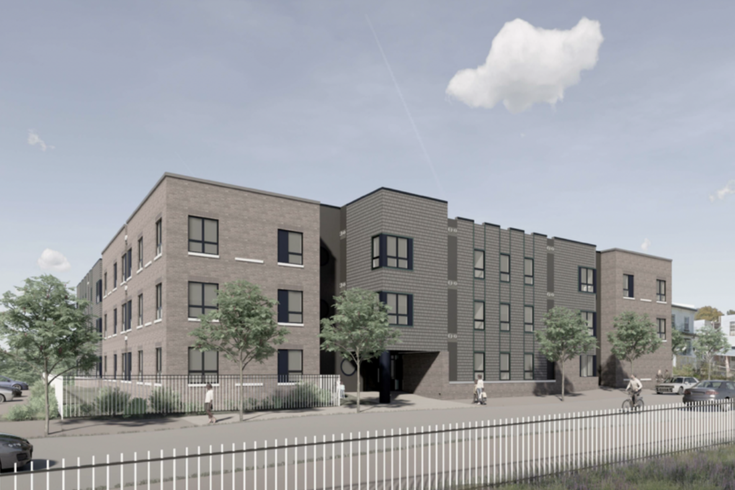 West Mill Place, a 38,400 square foot, 30-unit housing development at 920 N. 51st St., will open in January 2023. The apartment complex is being built by Gaudenzia Inc. and will serve people in recovery from substance abuse.

An affordable housing development for people in recovery from substance abuse broke ground at the site of a vacant lot on 51st Street in West Philadelphia last week.

West Mill Place, a 30-unit, 38,400 square-foot housing complex, is expected to open in January 2023, the Philadelphia Business Journal reported. The project is a partnership between drug and alcohol rehabilitation nonprofit Gaudenzia, and architect firm Cecil Baker and Partners.

The apartment building at 920 N. 51st St. is specifically for people who have recently finished rehab programs at a Gaudenzia facility.

The three-story unit will have one, two, and three-bedroom floor plans that will "bring life to a block of West Philadelphia historically affected by drug use and prostitution and will create much-needed affordable housing in an area that's often overlooked," Gaudenzia told the Business Journal.

Residents will have access to educational programs, including GED classes and after-school care for children. The development also will feature a community kitchen, an outdoor green space and a playground.

Gaudenzia, based in East Germantown, treats over 15,000 people annually across Pennsylvania, Washington, D.C., Maryland and Delaware. The organization has 51 treatment centers and 11 affordable housing programs that assist people in recovery.

Cecil Baker and Partners was founded in 1982 and has built residential units, office buildings, and police and fire stations. The firm has built other affordable housing projects, including Saint Rita Place, a senior community in South Philadelphia.

Development in West Philly has seen continued growth in recent years. In July, a proposal for a 352-unit apartment complex with space for retail shopping was revealed on 42nd and Market streets. Last year, work was completed on a mixed-use project at 4233 Chestnut St., which included 281 apartments and 8,000 square feet of retail space.