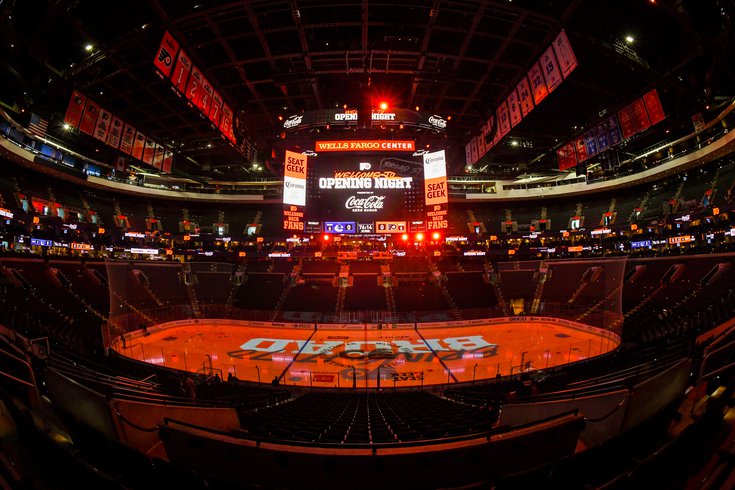 The Wells Fargo Center before the Flyers' home opener last season against Vancouver on Oct. 15, 2021.

A couple of names synonymous with Philadelphia Flyers coverage are being recognized by the Hockey Hall of Fame.

Al Morganti will receive the Elmer Ferguson Memorial Award for excellence in hockey journalism and Bill Clement the Foster Hewitt Memorial Award for outstanding contributions as a hockey broadcaster, the Hall and the Professional Hockey Writers' Association announced Tuesday.

Morganti covered the Flyers for years with the Philadelphia Inquirer before transitioning into his current roles as an analyst for NBC Sports Philadelphia and a co-host on WIP's Morning Show. He even received the news on the air Tuesday morning when the PHWA's President Frank Seravalli, a longtime Flyers writer for the Daily News, called into the station.

Frank Seravalli announces live on air that Al Morganti is the 2022 Elmer Ferguson Memorial Award recipient and he will have a plaque with his name on it in the Hockey Hall Of Fame. 🐐 pic.twitter.com/9Ar97tfDbk

“The Hockey Hall of Fame has a long history of recognizing players who were dominate forces over a concentrated period of time," Seravalli said via a press release. "Think Eric Lindros, Pavel Bure and Cam Neely. That is the level of impact Al Morganti had in hockey writing circles.

"For a decade and a half, Morganti was a true difference-maker. Philadelphia Flyers’ fans were privileged to read Morganti in the morning in the Inquirer, followed by fellow Elmer Ferguson Memorial Award winner Jay Greenberg in the Daily News in the afternoon. Back and forth they went, toe-to-toe every day for 10-plus years. Morganti was a superstar staring down stringent deadlines with witty and informed copy that had enough ‘bite’ to satisfy the appetite of a hard-nosed and hockey-crazed city.”

After an 11-year NHL career, which included the Flyers' back-to-back Cups in '74 and '75, Clement became a fixture of hockey broadcasting, mostly as an analyst through ESPN's initial run with the NHL and local Flyers broadcasts until retiring last January.

Plus, if you played any of NHL 07-14, he was the color guy alongside Gary Thorne where you can always hear him lament how sad it was that the Flyers traded some promising kid to Washington decades ago.

"Bill Clement's long-time consistency, glibness and professional approach to bringing hockey fans in the United States and Canada the nuances of the game make him extremely worthy of this distinction," said Chuck Kaiton, the President of the NHL Broadcasters’ Association. “No color analyst has done more US National broadcasts than Bill (1002), and his 21 years of covering Stanley Cup playoffs are a true credit to the quality of his work.”

Morganti and Clement will receive their awards Nov. 14 in Toronto at the Hockey Hall of Fame NHL Media Awards Luncheon prior to the 2022 induction ceremony later that night.

Their plaques will then be put on display in the Esso Great Hall alongside the previous award winners.

“On behalf of the Flyers organization, I congratulate Al Morganti and Bill Clement on this tremendous, well-deserved honor,” Comcast Spectacor Chairman and CEO Dave Scott said in a statement. "Al and Bill are legends on and off the ice here in Philly and all around the hockey world. They've made amazing contributions to the game, and we are so proud to call them members of the Flyers Family."

"Stick taps to fans in Philadelphia who make covering sports in this city so special," Morganti tweeted in a thread thanking his peers. "Their demands and knowledge raise the level of everybody's game. And a shout out across the 49th parallel, because Canadians still make this game so special to cover."

Stick taps to fans in Philadelphia who make covering sports in this city so special. Their demands and knowledge raise the level of everybody's game. And a shout out across the 49th parallel, because Canadians still make this game so special to cover.