Did you get yours? 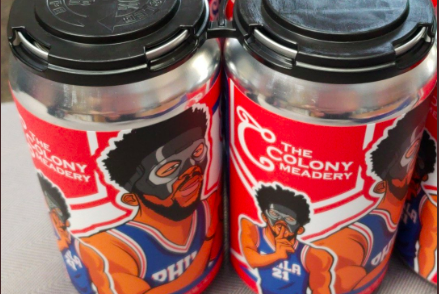 The Colony Meadery in Allentown, Pennsylvania rolled out a new mead on Saturday that didn't stick around the shop for long.

The Joel Em-Mead, a 6.9% with hints of cherry and pomegranate that bites with ginger was inspired by the Philadelphia 76ers player's favorite beverage: the Shirley Temple.

"I have to admit, I haven’t had one of those in 20 years," laughed CEO and co-founder Greg Heller-Labelle of The Colony Meadery.

The limited-time series was already half gone 10 minutes after it went online, Heller-Labelle said. At the store at 11 a.m., there was a small queque of fans that wanted to claim their own cases, at $5 per can.

The worldwide Sixers army are the ones that are going for it, he said. He even got requests from Austria, Switzerland and New Zealand for cases.

"There are Sixers fans all over the world," he said.

"I was a pretty longtime listener and after the playoff run, and I was like, I gotta ask at least," Heller-Labelle said.

Thanks to the podcast's advertising, he said, they sold out of all 76 cases of the mead, complete with a complimentary Embiid poster, in less than an hour.

One hour until Joel Em-mead is available. Only 76 cases. Use code RICKY for $5 off your order and a free poster. https://t.co/cchRodXQLj pic.twitter.com/QClx6hnQ5Y

"We’re pushing more into Philly with distribution now and it felt like a good way to mesh our interests and just trust the process," he said.

It was a good way to show his support for the team, too. They're all big fans, he said.

"We're in the slow part of the off season, and certainly a lot happened and then a lot didn’t happen, so it’s a good time to say that we’re really positive about this team," he said. "I think Joel and Ben Simmons and all the guys are gonna do really well next year."

The Colony Meadery did allocate a few cases to local wholesalers — so if you're in the Allentown area, you might want to ask around to see who's carrying the mead. And there were about 15 cases left in-store around 1 p.m., for anyone who wants to make the drive out there.

Oh, and how they ended up with exactly 76 cases? That wasn't planned.

"When it came out at 76 cases, we considered that a sign from the basketball gods," Heller-Labelle said. "We said, 'Well, that’s just perfect.'"

The origin of #NBAVote Joel Embiid's love for Shirley Temples.