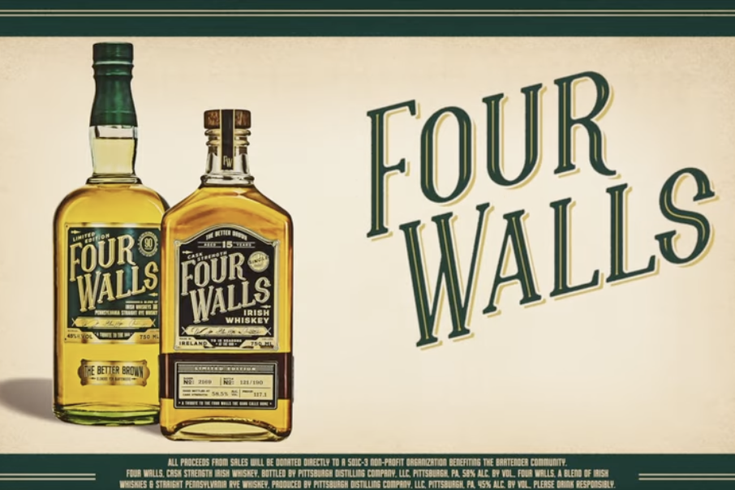 Four Walls is a new spirit brand from the creators of 'It's Always Sunny in Philadelphia.' All of the proceeds from their first batch of bottles will support bar and restaurant workers.

It took them 15 seasons of "working" together in a fictional dive bar, but the "It's Always Sunny in Philadelphia" gang have finally put aside some of their braindead fantasies to develop a high-quality spirit of their own. Their new Four Walls whiskey is a tribute to bartenders and proceeds from all bottles sold will benefit hospitality workers in Pennsylvania.

Series co-creators and stars Rob McElhenney, Glenn Howerton and Charlie Day announced Thursday that they created the new whiskeys as a tribute to the four walls of Paddy's Pub, which has supported the FXX comedy's record-breaking run among live-action TV sitcoms in the United States.

“We were shooting season 15 when bars were shutting down all across America,” McElhenney told The Hollywood Reporter. “So, we decided to source some really great whiskeys and create something as a tribute to the bar and kick it off by giving back.”

Sales of the two Four Walls whiskeys will go to the Pennsylvania Restaurant and Lodging Association’s HARP, which is short for the Hospitality Assistance Response of Pennsylvania. During the COVID-19 pandemic, the emergency fund provided grants to hospitality workers who experienced decreased wages or loss of work related to the public health crisis.

The Cask Strength Single Barrel Collector's Edition bottle is an Irish whisky made in traditional pot stills and matured in ex-bourbon barrels for more than 15 years. There are only 755 bottles and they're not cheap — each goes for $999.95 and comes in packaging that includes signatures from the show's creators.

The Bartender's Blend Limited Edition, a 90-proof blended Irish and Straight Pennsylvania Rye, sells for $89.95. This whiskey will get a run with several hundred cases and is expected to be available during tastings at live events for the "It's Always Sunny Podcast," which just so happens to be coming to The Met Philadelphia for a taping on Sept. 18.

“The sturdy dose of perfectly integrated alcohol makes this spicy and fruit-driven Irish expression a no-brainer for high-end cocktails as well as a perfect vehicle for neat sipping armchair contemplation," said John McCarthy, spirits journalist and judging director of the Barleycorn International Spirits Competition, in a testimonial on the Four Walls website.

Day explained that the idea gained traction after he, McElhenney and Howerton recognized that they could leverage the celebrity spirit brand trend to raise money for people who work in bars.

“We learned just how rare and how collectible old Irish Whiskey is," Day told The Hollywood Reporter. "And we couldn’t believe we got our hands on some and wanted to release it and do something for the people and places that do so much for all of us — the bars and the bartenders.”