Cataldi has been a dominant force on sports talk radio since debuting at the station in 1989. His replacements currently host the station's Midday Show 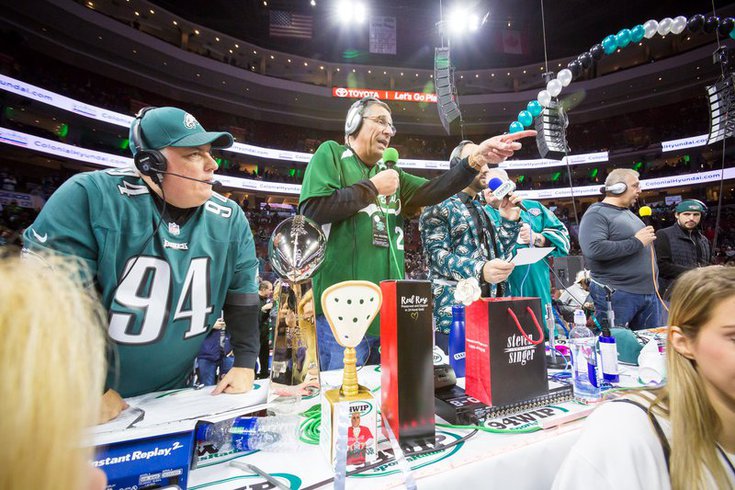 Angelo Cataldi, center, is retiring from 94WIP after the Eagles season ends. Joe DeCamara and Jon Ritchie, who are not pictured, will take over the morning show.

"We are thrilled by your choice of Joe and Jon," Cataldi said on the show. "We think they will be spectacular."

DeCamara has 21 years of on-air experience in the Philadelphia market, and has hosted nationally syndicated shows for ESPN Radio. He has appeared on several TV stations locally and nationally. DeCamara graduated from St. Joseph's Preparatory School in 1996 and Fairfield University in Connecticut in 2000.

"I am ecstatic for the opportunity to host mornings on WIP," DeCamara said. "There is a remarkable tradition of success long established by the legend, Angelo, and the entire current morning team, and my aim is to continue to uphold that level of excellence ... And I look forward to multiple parades down Broad Street over the next four months!"

Ritchie is a Mechanicsburg, Pennsylvania native who played seven seasons in the NFL for the Oakland Raiders and Philadelphia Eagles. Following his retirement, he became a commentator and on-air talent for various shows on ESPN, DirecTV and NBC Sports Network.

"I'm grateful and honored that Joe and I have the opportunity to follow in Angelo Cataldi's footsteps on WIP's morning show," Ritchie said. "We'll work hard to uphold the station's tradition of emotional connection with the greatest sports fans in the world."

"They got an all-star team," Cataldi said on the show. "They got some real power here."

The new 94WIP Midday Show lineup, as well as the new Morning Show co-hosts, will be revealed in the coming months.

"For the last three decades Angelo Cataldi set the standard for morning drive in Philadelphia and helped define the sports narrative of this great city," said Rod Lakin, brand manager of SportsRadio 94WIP. "Joe and Jon, along with Rhea Hughes and the other talented members of the WIP Morning Show, will adhere to the standard that Angelo created and develop a connection with the Philadelphia sports audience for years to come."

Cataldi, who has been with the station since 1989, announced his retirement about a year ago. The 71-year-old Rhode Island native cited burnout in his decision to step away. He said he originally planned to retire at the end of 2021 when his contract with WIP was due to expire, but decided to stay an extra year out of gratitude to the team running the station.

In 2019, Cataldi signed a multi-year contract extension to stay at WIP. At the time, he said he probably would have retired if former WIP personality Marc Farzetta hadn't left to host the morning show at 97.5 The Fanatic.

Throughout his 33 years on air in Philadelphia, Cataldi has remained a dominant force in sports talk radio, with WIP's Morning Show atop the ratings in local sports radio.

Before starting at WIP, Cataldi worked as a sports reporter and columnist for the Inquirer, covering the Eagles. He was nominated for a Pulitzer Prize. He was inducted into the Broadcast Pioneers of Philadelphia Hall of Fame in 2012.