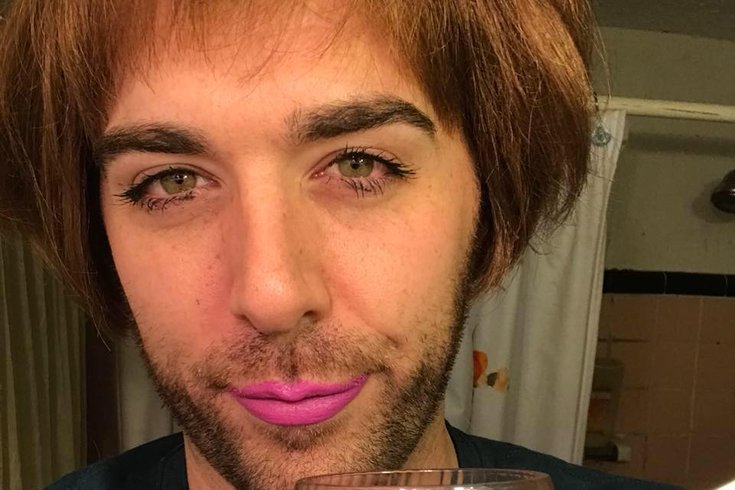 You may have heard about Aunt Mary Pat DiSabatino from the fawning media coverage, viral Facebook videos or the many live shows.

Management at Win Win Coffee Bar, 931 Spring Garden St., says it had no idea Aunt Mary Pat would be performing at their establishment. The shop asked Mary Pat to leave after a transgender employee was offended, a move that's caused social media backlash against the coffee shop and a subsequent flood of negative reviews.

The employee says the character is transphobic, but the performer believes he is being unfairly judged.

Aunt Mary Pat is performed by Troy Hendrickson. The 30-year-old Delaware (not Delaware County) resident has gained plenty of attention for his impression of a suburban Philly mom with a thick accent and biting attitude, producing plenty of viral videos, such as Mary Pat's angry reaction to missing the Eagles Super Bowl parade to work a shift at Acme.

Hendrickson has brought his character on the road, doing shows across the Philly region. On Wednesday evening, he was scheduled to host karaoke at Win Win for Soroptimist International of Rittenhouse Square, an organization that works on improving the lives of women and girls.

Hendrickson said he got to the event and was greeted by an organizer from Soroptimist International. About five to 10 minutes later, a manager spoke to the event organizer, and eventually pulled Hendrickson aside, too.

"What he said was I had made one of their employees uncomfortable by my appearance," Hendrickson said he was told. "The employee was transgender and my appearance was offensive."

Hendrickson said he offered to speak to the employee and explain the character was not mocking transgender people; he told PhillyVoice that Mary Pat is a heterosexual, cisgender woman.

The manager went and talked to the employee, came back and said it would be best if Hendrickson left.

The employee, Lily Kulp, told PhillyVoice that no matter how Hendrickson characterizes his performance, it is a mockery of transgender women. She said transgender women spend a lot of money on procedures during their transitions, and to have that publicly made light of is "not OK."

Kulp clarified that she does't take issue with drag performances in general, but believes Hendrickson's performance in particular is "gross and transphobic."

She  didn't want to speak to Hendrickson, she said, because his interaction with the manager indicated to Kulp that Hendrickson wasn't going to take her concerns seriously. Kulp said she had already worked six hours and often gets misgendered at work.

"I guess like my issue is my feelings were belittled by this person," Kulp said. "I didn't want to engage with this person, who was already rejecting what [the manager] was saying."

Guidelines provided by GLAAD and the National Center for Transgender Equality both stress that it is important to understand the difference between someone performing in drag and someone who identifies as a transgender individual. However, neither organization specifically advocates or condemns such performances.

"I'm a gay man, I've always strived for inclusivity. I've worked and performed with a lot of queer and transgender artists in the past," Hendrickson said, adding that he has never had anyone take issue with the character prior to Wednesday.

Hendrickson said he didn't "make a stink" about the whole thing. He was up next for karaoke, so we went inside, performed "Silver Springs" by Fleetwood Mac and left. Half the bar left with him, according to Hendrickson, who said a lot of people had traveled to come see his act.

Kulp said Hendrickson performing after he was asked to leave was basically a slap in the face, adding that he gave a "weird" speech about equality after singing. She also said just because some transgender people are OK with Aunt Mary Pat doesn't make it acceptable.

Hendrickson posted to Aunt Mary Pat's Facebook page afterward to confirm that he had been asked to leave Win Win. That's when the reactions started flooding in; Aunt Mary Pat's fans had sunk Win Win's Facebook rating to around 1.5 out of 5 stars as of Thursday afternoon. Several negative reviews have also been posted to the coffee shop's Yelp page. Many of the reviews accuse the business of discriminating against certain types of LGBTQ people.

The coffee bar posted a Facebook status addressing the controversy Thursday afternoon. According to the status, Aunt Mary Pat had been scheduled to perform "unbeknownst to anyone at Win Win," despite that a Facebook event for the karaoke night advertised Aunt Mary Pat's appearance as early as June 1.)

The status reads, in part:

Since Win Win opened in 2015, we have sought to create an open and welcoming venue for all individuals. However, it also is our prerogative to ensure our employees and patrons feel respected, heard and safe.

Kulp said management at Win Win has worked hard to make the business a safe space, and was baffled at the idea some would suggest the shop was homophobic.

Asked about the wave of negative online attention Win Win was getting, Hendrickson said he didn't ask anyone to post reviews bashing the shops. He also said he's in no way mad at the employee, but is upset with the way Win Win handled the situation.

"I told the manger, 'You're assuming a lot about me," Hendrickson said.

Hendrickson said if he could get the chance to speak to Kulp, he would tell them that infighting within the LGBTQ community doesn't do either of them any good: "I'm on the same side as you."

"I do want them to sincerely know, what I do is no reflection on them as a person. The character is a cisgender female. It's about the wardrobe, the accent," Hendrickson said.

"This character is based off my mother, It's a love letter to my mom," Hendrickson said. "The facial hair is just cause I don't like to shave often."

The beard, in particular, was a sticking point for Kulp, who said it's part of why she took issue with Hendrickson's performance.

"Cis gay men need to think about how they take up queer communities," Kulp said. "What is he getting from that, and who is he throwing under the bus?"