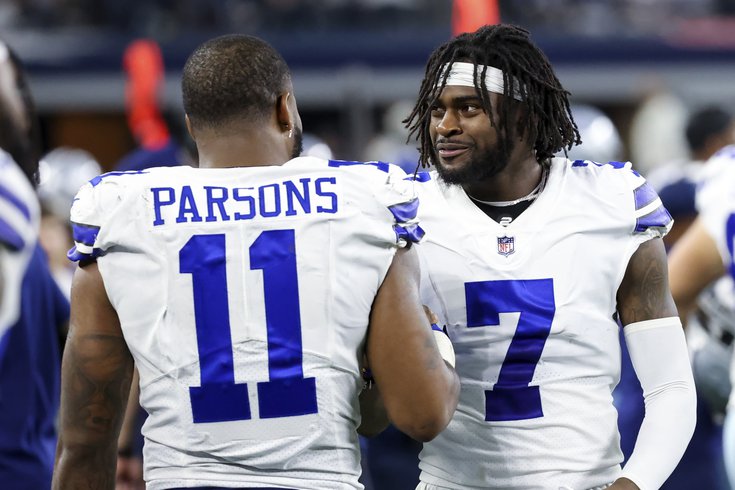 Micah Parsons and Trevon Diggs give the Cowboys more star power on defense, but the Eagles have a more complete defense with fewer glaring holes.

The Philadelphia Eagles have had an impressive offseason, adding potential difference makers on both sides of the ball and plugging obvious holes with solid starters. As they continue to build toward Super Bowl contention, one of the teams in their way is the Dallas Cowboys, who the Birds have struggled against since they won the Super Bowl after the 2017 season.

While the Eagles have made a slew of additions to their roster, the Cowboys have lost more than their share of key contributors. Have the Eagles caught up to the Cowboys? Let's take a position-by-position look, and compare the two teams. On Saturday we looked at the offensive side of the ball. Today we'll look at the Eagles' and Cowboys' defenses.

The Cowboys' best lineman is DeMarcus Lawrence, who came in at No. 5 on our "10 worst contracts in the NFC East." In the three years since signing a five-year deal worth $105 million, Lawrence has 14.5 sacks. There are 61 (!) other players with at least 14.5 sacks over that span. For reference, Derek Barnett had 14 sacks over the last three seasons.

Still, despite meager sack production, Lawrence is a very good player, particularly against the run, and he remains capable of putting up double-digit sacks. We'll give him a minor edge over Brandon Graham, who is recovering from an Achilles tear at the age of 34.

The Cowboys' top three edge rushers otherwise are Dorance Armstrong, Dante Fowler, and second-round rookie Sam Williams. The Eagles' top three edge rushers otherwise are Josh Sweat, Barnett, and Tarron Jackson. Sweat's sack totals have improved each season (0 in 2018, 4 in 2019, 6 in 2020, 7.5 in 2021), despite playing out of position for most of the season last year. In my opinion, he is the most likely player from this group to make a legitimate impact in 2022, however, I'll give the overall trio of Armstrong, Fowler, and Williams a slight edge.

The Cowboys' best interior lineman is Neville Gallimore, who played well after missing the Cowboys' first 12 games with an elbow injury. Beyond Gallimore, the Cowboys have very little to feel good about in the middle of their defensive line. And even Gallimore might find it difficult getting snaps if he played for the Eagles.

This is the most lopsided positional group between these two teams on either side of the ball.

In Micah Parsons' rookie season, he had 84 tackles, 13 sacks, and 3 forced fumbles on his way to earning NFL Defensive Rookie of the Year honors, to go along with a first-team All-Pro nod and a trip to the Pro Bowl. He also finished second behind T.J. Watt for NFL Defensive Player of the Year. He'll head into the 2022 season as the best defensive player in the NFC East.

Haason Reddick is the Eagles' version of Parsons, and he's a very disruptive player in his own right, with 23.5 sacks and 8 forced fumbles over the last two seasons.

Leighton Vander Esch was a stud as a rookie in 2018, when he had 140 tackles, 2 INTs, and 7 pass breakups on his way to second-team All-Pro honors. Since then he has battled injuries and inconsistency. The Cowboys opted not to exercise his fifth-year option for 2022 during the 2021 season, and he eventually signed a one-year deal worth just $2 million. The Cowboys' other off-ball linebackers who should compete for playing time are Jabril Cox, special teams guy Luke Gifford, and sixth-round rookie Devin Harper.

After years of neglecting the linebacker position, the Eagles may finally have a decent group. The signed Kyzir White away from the Chargers in free agency, and they think they have a third-round steal in rookie Nakobe Dean. Even if White or Dean don't pan out, the Birds still also have T.J. Edwards, who was by far the team's best linebacker in 2021.

I can't believe it, but the Eagles finally have a better situation at off-ball linebacker than the Cowboys (that is, if we're putting Parsons in a different category).

Beyond Diggs, the Cowboys have a lot of question marks at cornerback, mainly, who is the CB2?  The Cowboys selected Kelvin Joseph in the second round of the 2021 draft, despite glaring character concerns. He is now linked to a murder case. If Joseph is not the starter, Dallas will likely go back to Anthony Brown at CB2, with Jourdan Lewis in the slot.

The Eagles have arguably their best trio of corners in a decade in Darius Slay, James Bradberry, and Avonte Maddox. They also acquired a half dozen or so young corners during the 2021 offseason and regular season who will continue to be developed behind the scenes.

Neither the Cowboys nor the Eagles have a very compelling safety tandem. The Eagles settled on bringing back Anthony Harris, and for now, the starter opposite Harris is projected to be Marcus Epps. The Eagles tried to sign Marcus Williams this offseason, but he chose Baltimore over Philly. While the Eagles were trying to get a deal done with Williams, their other target, Justin Reid, signed with the Chiefs. So we'll see if the Eagles attempt to acquire a safety as the offseason continues on.

The Cowboys' projected starters at safety are Jayron Kearse and Malik Hooker. Kearse had a breakout season in 2021, making 101 tackles while collecting 2 INTs and breaking up 10 passes.

This isn't a position of strength, for now, for either team, but we'll give the slight edge to Dallas.

As noted above, Parsons is the best defensive player in the division, and Diggs gave the Cowboys' offense a boatload of extra possessions in 2021. That's a good start for the Dallas defense. But on paper, the Cowboys' advantages over the Eagles at edge rusher, rush linebacker, and safety are minor, while the Eagles have more extreme advantages over Dallas, most notably along the interior of the defensive line.

Dallas has more star power, but Philly has a more complete defense with fewer glaring holes.

We also discussed the Eagles' and Cowboys' rosters in podcast form. Listen below (BGN Radio #249). And here's the iTunes link. Review, subscribe, etc.