The severe weather ripped up buildings, toppled cars and left a trampoline in a tree 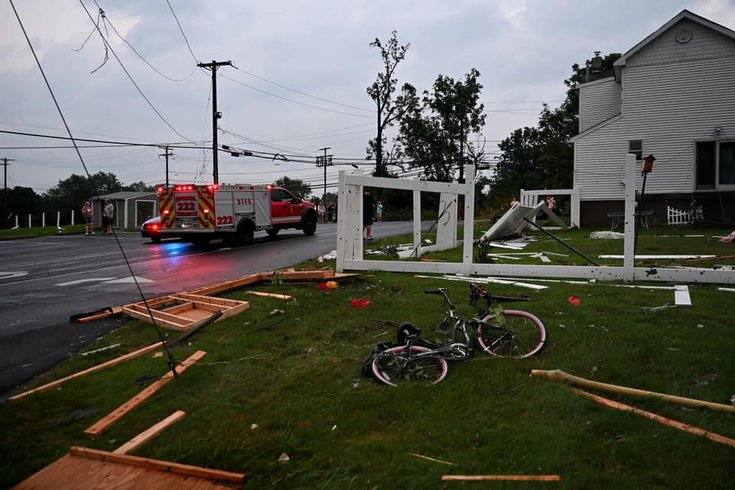 A tornado left widespread damage to homes and businesses in Bensalem Township on Thursday night. It was one of two to touch down in Bucks County.

The National Weather Service confirmed the first tornado touched down in Solebury Township around 5:50 p.m., the Bucks County Courier Times reported. Another tornado came down near the Neshaminy Mall in Bensalem around 7:15 p.m.

Bensalem suffered the most impact from the storm. A mobile home park and several businesses, including a Lowe's and a Walmart were damaged. There were several structural collapses, including at the Faulkner car dealership on Street Road.

The tornado toppled cars, blew out windows, ripped up roofs and left a trampoline in a tree. The severe weather also caused significant flooding.

Five people were injured during the storm, including four who were at the car dealership when the tornado hit, police said. The fifth person was at a nearby business.

No one suffered critical injuries and no deaths were reported, police said. Despite several homes being destroyed, no one was injured at the nearby mobile home park. The Bensalem Police Department was providing shelter to any resident displaced by the storm.

Storm damage led to multiple road closures in Bensalem that remained in effect overnight. Police said that the road closures would be reassessed Friday morning.

Here's a look at the damage:

Just had a tornado come through Bensalem. #tornado #besalem pic.twitter.com/CAnXEei61a

Fire and emergency crews are working at the scene of numerous building collapses, gas leaks, trees and wires down throughout the township.

Thursday night's tornadoes came just weeks after parts of Bucks County — most notably Bensalem, Bristol and Croydon — were slammed by a 100-year flood that left homes, apartments and businesses destroyed.

The torrential rain also left cars submerged and forced residents to evacuate their homes. Some areas saw as many as 10 inches of rainfall.

The recovery process from the flooding remains ongoing in Bucks County.