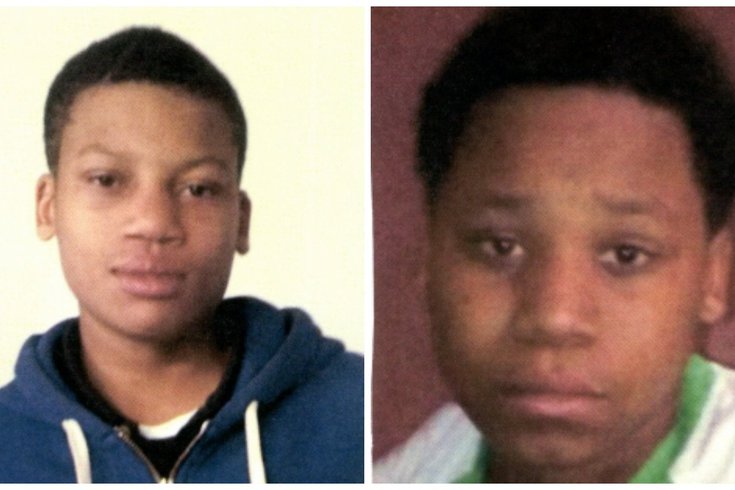 Police say Kiyair Smith, 17, and Jahquill Brown-Watson, 13, are missing after fleeing the Department of Human Services office in Center City on Monday morning.

UPDATE: Police reported that these children have been located and have returned home on Tuesday, May 24.

Two children are missing after they ran from the Department of Human Services office in Center City on Monday morning, Philadelphia police said.

Jahquill Brown-Watson, 13, and Kiyair Smith, 17, fled the DHS office at 1515 Arch St. at about 8:52 a.m. Monday. Police said the boys had just learned they would be placed in foster care.

The two had been taken to the Center City DHS office by their social worker.

Jahquill is about 5 feet 5 inches tall and about 175 pounds with a stocky build, brown eyes, medium complexion and a short black Afro. Law enforcement officials said he was last seen wearing a black, long-sleeved sweatshirt with “YMCMB” printed on it in white letters, Army camouflage pants and black boots.

Jahquill is in ninth grade at the Carson Valley School, at 1419 Bethlehem Pike in Flourtown, police said.

Kiyair is about 5 feet 8 inches tall and about 150 pounds, with a thin build, brown eyes, light brown complexion and black, short-cropped hair. According to police, he was last seen wearing a light-blue plaid shirt, tie-dye jeans, a red hat and black sneakers with pink laces.

Kiyair is in 11th grade at Overbrook High School, at 5898 Lancaster Ave., according to police.