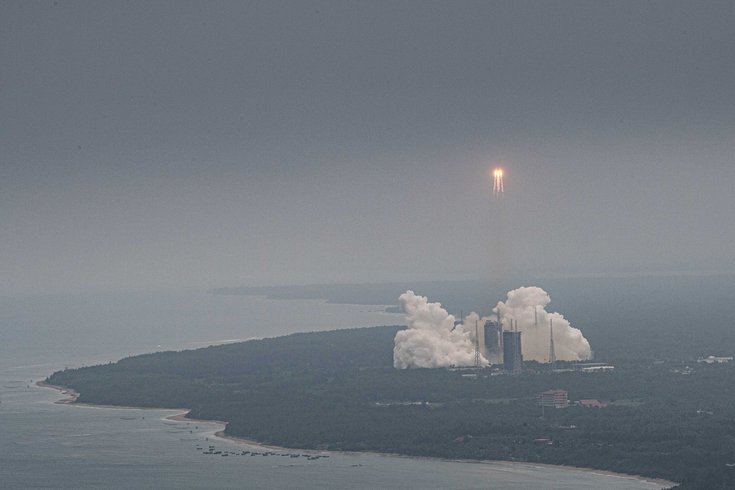 The Long March-5B Y2 rocket, carrying the Tianhe module, blasts off from the Wenchang Spacecraft Launch Site in south China's Hainan Province on April 29, 2021. The rocket's main stage did not make a controlled reentry to Earth and its burned up remnants are expected to crash some time this weekend at an undetermined location.

The remnants of an uncontrolled Chinese rocket orbiting the Earth could make a crash landing as soon as Saturday, according to the latest estimates on Thursday from officials tracking the large object.

The space debris was part of China's launch last week of the Long March 5B rocket, which will serve as the core module for the Tianhe Space Station, that nation's first permanent space hub. The core stage of the rocket's launcher detached as planned, but instead of reentering Earth's atmosphere on a controlled path to the ocean, the debris went into orbit sending it on an unpredictable crash course.

At roughly 100 feet long, the empty core stage has been circling Earth every 90 minutes at a speed greater than 15,800 mph, gradually decreasing in altitude until eventually it will be dragged out of orbit. Most of the core will likely burn up and disintegrate during its descent, but there remains a possibility of damage if it lands in an inhabited area.

Aerospace Corp., a federally-funded non-profit, projects that the core will land in the Pacific Ocean near the Equator after passing over several East Coast cities in the United States, including Philadelphia. The company's online tracker predicts the crash will occur May 8 around 11:34 p.m. local time.

The exact location of reentry will not be known until within hours of the eventual crash.

China's space agency has not publicly commented on the status of the rocket core, but the Global Times newspaper published by the Chinese Communist party has claimed the debris is made of "lightweight materials" that will burn up in the atmosphere and pose minimal risk.

"In all, it is another hyping of the so-called 'China space threat' adopted by some Western forces," Song Zhongping, an aerospace expert and TV commentator, told the Global Times. "It's an old trick used by hostile powers every time they see technological breakthroughs in China, as they are nervous."

On Thursday, White House press secretary Jen Psaki acknowledged that U.S. Space Command is tracking the object and said there is a growing need for improved international standards around issues like this, which largely remain governed by the 1967 Outer Space Treaty.

"The United States is committed to addressing the risks of growing congestion due to space debris and growing activity in space and we want to work with the international community to promote leadership and responsible space behaviors," Psaki said.

Since oceans cover about 71% of the planet's surface, it is most likely any debris the Long March 5B core will land in the water. But some fragments could reach land and inhabited areas, as happened last March when China launched another an experimental Long March 5B rocket capsule. It pieces scattered in the Atlantic Ocean and near the coast of West Africa, where debris was found in the village of Mahounou on the Ivory Coast.

Jonathan McDowell, an astrophysicist at Harvard University, told The Guardian he expects that some of the rocket core will survive. If it were to crash on land, McDowell said it would be the "equivalent of a small plane crash scattered over 100 miles."

An estimated 200 to 600 orbital reentries of space debris occur each year, according to the Australian Space Academy. Only about 20% of these instances include masses large enough to partially survive reentry and drop debris that reach Earth's surface.