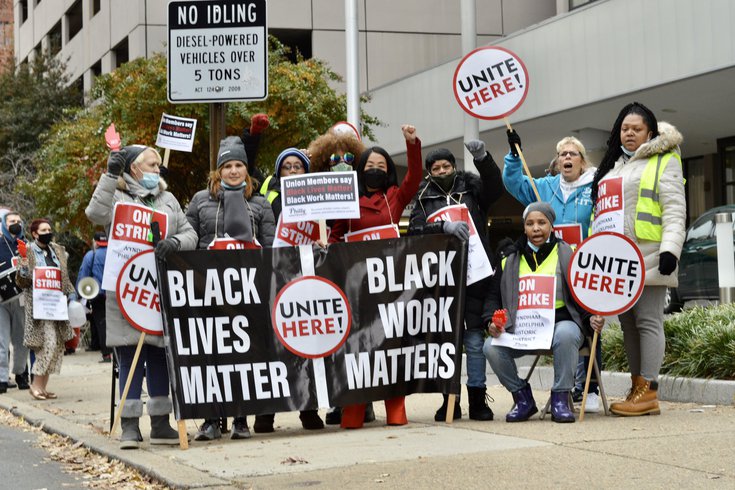 Dozens of Wyndham Philadelphia Historic District hotel workers either walked off the job or failed to report to their scheduled shifts on Sunday, instead opting to join the third picket in the ongoing fight for a fair and equitable contract. Councilmember Helen Gym was among several city leaders who joined the picket line in solidarity with UNITE HERE! Philadelphia Local 274.

In what organized workers at the Wyndham Historic District hotel are calling "Strikesgiving," over a dozen hospitality workers picketed outside the Old City hotel on Sunday, continuing an ongoing fight for increased pay and better working conditions.

UNITE HERE Local 274 announced the strike on Twitter early Sunday morning, saying that "housekeepers, bartenders, food service staff, cooks, laundry attendants, dishwashers, and bellmen all walked off the job or failed to report to a scheduled shift at the hotel, instead joining a picket line." Those in attendance at the Philadelphia Marathon, which wrapped up on Sunday afternoon might have gotten a glimpse at the workers outside of the hotel, which is located at 400 Arch St. in Old City.
Workers previously voted to threaten a strike at the end of October, and held pickets on November 8 and 15, in advance of ongoing negotiations with Wyndham hotel leaders over a new contract, as their previous contract expired in 2019.
The union has previously argued that the Wyndham's reopening plans following the initial surge of the COVID-19 pandemic was not made in the best interest of its workers. Local 274 has said that they believe the workers have the right to determine what reopening and recovery looks like for them. This means increased pay, lighter workloads, and better working conditions.
In their announcement of the strike, the labor union said that they are making the necessary efforts to "secure livable wages and safer workloads for the majority Black, Brown, and immigrant workforce" at the Wyndham hotel.
City Councilmember Kendra Brooks started a dance line in front of the Wyndham hotel on Sunday to show her solidarity with the hospitality workers. She danced to the "Cupid Shuffle" along with over a dozen picketers.
"When we show up for workers we show up with joy and with music," Brooks tweeted following the picket. "The labor movement is a thing of beauty."

State Senator Nikil Saval, who previously joined the workers for their November 15 picket. This time, the Senator joined the strike line with his son, Ishaan, to support the group with a chant of solidarity.
Senator Saval said that hospitality workers were among the hardest hit by the pandemic, which sent most workers across the industry home for months during the initial surge of the pandemic, then brought them all back as the COVID-19 recovery and reopening began.
He notes that all these workers are asking for are "reasonable workloads and family-sustaining wages," and that jobs within the hospitality industry are jobs that the majority of Philadelphians without a college degree hold, and are jobs often held by women, as well as Black, Brown, and immigrant workers.
"I want to support the workers who are putting their bodies on the line to raise standards not just for themselves, but throughout the hospitality industry," Senator Saval said.

Ishaan and I were also honored to join workers in a chant! @UNITEHEREPhilly pic.twitter.com/CB2vSkWwYj

Other supporters included Councilmember Isaiah Thomas, who rallied alongside picketers. State Rep. Malcolm Kenyatta also voiced his support on Twitter, expressing his solidarity with UNITE HERE! Local 274 and their fight for increased pay and benefits.
A representative from the Wyndham hotel told NBC Philadelphia that the hotel has remained open and fully operational amid protests and pickets by union members. Contract negotiations are still ongoing, though members of Local 274 are hopeful that UNITE HERE can help them in their fight for equitable pay and working conditions.