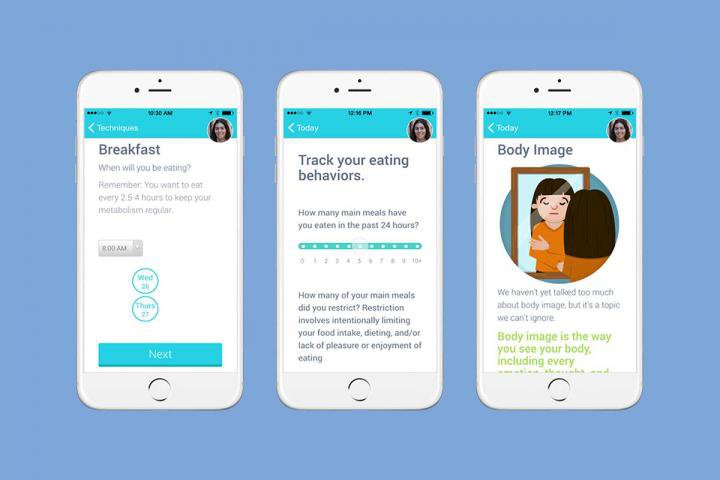 A phone app that delivers cognitive behavioral therapy appears to be an effective method for treating eating disorders, including bulimia and binge eating, a Washington University study finds.

Fewer than 20% of college students suffering from eating disorders ever receive treatment due to a lack of clinicians and stigmas associated with seeking help.

Offering cognitive behavioral therapy through a phone app appears to be an effective way to reduce that gap, according to eating disorder experts at Washington University in St. Louis.

Students who used a therapy app reported a decline in symptoms, including binge eating, purging and body image concerns, according to a study conducted by the researchers. They also were more likely to continue treatment than those referred to university counseling services.

Cognitive behavioral therapy teaches patients coping skills to change behaviors and patterns of thinking. It is often the first line of treatment for eating disorders like bulimia and binge eating disorders.

The content on the phone app was designed to challenge and change harmful thoughts and behaviors related to eating. The users also had access to a coach who talked to them on the phone at the beginning and end of the program and sent motivating texts in between.

"College students are busy and often don't have spare time to seek the help they need, and many college counseling centers aren't equipped with clinicians who are trained in treating eating disorders, so we believe digital interventions like this one can dramatically increase access to care," said Ellen E. Fitzsimmons-Craft, an assistant professor of psychiatry at Washington University.

"In our study, this digital phone app was associated with dramatic increases in access to treatment. And in cognitive behavioral therapy, we know the app is providing a therapy that's proven to help."

Their findings, published Monday in JAMA Network Open, were based on data from 690 women at 27 U.S. colleges, including Washington University.

The women first completed a questionnaire evaluating their risk for an eating disorder. Those determined to have – or be at risk of – an eating disorder were randomly assigned to either use the phone app or receive standard counseling sessions. Women with anorexia were not included because a different treatment approach is considered more beneficial.

The phone app allowed students to engage with the therapy on their own time. There were 40 sessions, each about 10 minutes long.

Among the women assigned to use the phone app, 83% completed at least some of the therapy sessions. Only 28% of those who referred to standard counseling sessions completed any treatment.

Denise Wilfley, a psychiatry professor and the study's principal investigator, said their findings are particularly important during the COVID-19 pandemic because the isolation brought on by social distancing is affecting many people's mental health.

"We think these problems could increase in the coming months, so it's important that there be ways to reach students who are having difficulty. We believe delivering therapy with a phone-based app may be truly effective."

The study originally began in 2014 with a more traditional web-based intervention that involved longer sessions every week, but they weren't as effective. To engage more students, the researchers created the phone app with the help of a private company, Lantern.

"Students have greater and greater expectations of their technology," Fitzsimmons-Craft said. "After a slow start with the online therapy, we found that engagement increased significantly once we switched to shorter sessions using the mobile app."