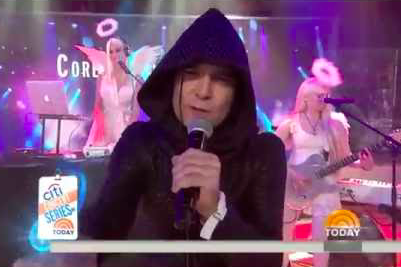 Cory Feldman performs "Go 4 It" on "The Today Show."

If you've been paying any attention to the bizarre saga of former childhood star Corey Feldman ("Stand By Me," "Gremlins") and his band's spooky performance last Friday on "The Today Show," you're probably still shuddering in the corner of a dark room.

For years, Feldman has been hyping up the release of a double concept album called "Angelic 2 The Core," which sounds like an early AFI fan's worst nightmare or an amazing Tenacious D project. On Friday, Feldman and his band went on the usually trend-conscious talk show to perform "Go 4 It," one of the album's lead tracks and a roundly visceral defense of uninhibited self-expression.

It didn't go well at all. Apart from the song itself — and hey, people can have their tastes — Feldman engaged in a glitchy choreographic imitation of Michael Jackson. The reaction was so cruel and harsh that Feldman took to Facebook Live (since deleted) to discuss his disappointment over all the heartless shaming. Transcript via A.V. Club:

He's almost got a point. Anyone who has ever performed live outside the realm of karaoke knows it's not fun to flub notes or forget lyrics, unless you play in a noise band. You just have to be your own worst critic about it and keep your head up. Whether you believe them or not, most kind people will simply say they didn't even notice, but when a band goes on "The Today Show," it's pretty much open season for the entire world.

We'll leave the general reaction aside — the real question is whether "The Today Show" sort of set Feldman up — but one YouTuber's take on the performance is too great not to share.