Thomas Williams couldn't afford to wait very long for a new organ. He had one within four days of being listed in need 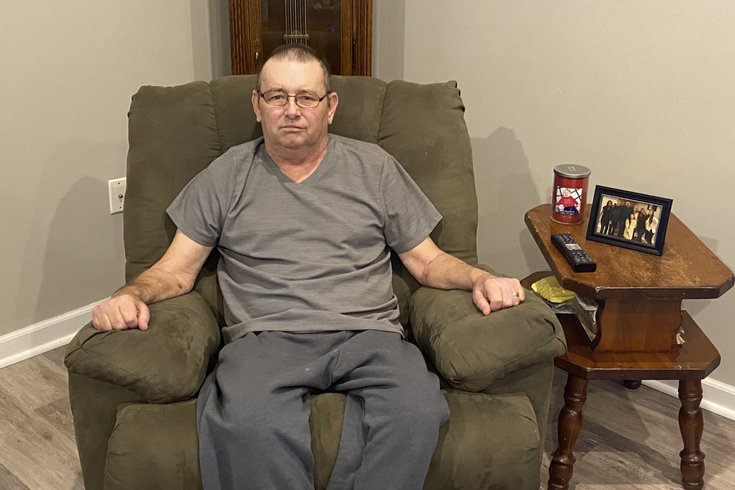 Thomas Williams, 60, is recovering from a single-lung transplant he received March 19 at Temple University Hospital after a severe COVID-19 battle. The South Jersey resident is among dozens of coronavirus patients who have received organ transplants in recent months.

Thomas Williams arrived at Temple University Hospital in early March knowing his life might depend upon whether he would qualify for – and receive – a lung transplant.

The South Jersey resident had spent the previous month hospitalized with COVID-19 at the Deborah Heart and Lung Center in Burlington County. His heart disease and chronic obstructive pulmonary disease had left him highly susceptible to a severe infection – and the coronavirus had quickly taken a toll on him.

By the time he was transferred to Temple, Williams, 60, had developed end-stage lung disease. He was consuming up to 50 liters of oxygen per minute and his body had deconditioned.

"I was really challenged with breathing, even with all the oxygen support," said Williams, a retired law enforcement officer. "It was very hard."

Within 15 days, Williams had undergone a transplant evaluation – an extensive workup that included cancer screenings, blood tests and a heart catheterization – and quickly received a new right lung.

"I would just stress that the stars had to align correctly for him," said Dr. Nathaniel Marchetti, medical director of Temple's respiratory intensive care unit. "Thankfully, he was able to get it, because he certainly would have died without it. But ... this is not the standard transplant story – that's for sure."

Unlike Williams, most lung transplant recipients are not hospitalized with acute illnesses when they undergo their operations. Rather, they are living at home with chronic conditions. But the last several months have seen a surge in transplants being performed on patients battling severe COVID-19 complications.

And though the severity of their illnesses propels them to the top of the transplant list, they can't afford to wait very long.

Williams was fortunate. He received his transplant just four days after being listed.

"That was in and of itself an absolute miracle," Williams said. "That happened so quickly, that they had found a lung that I was compatible with." 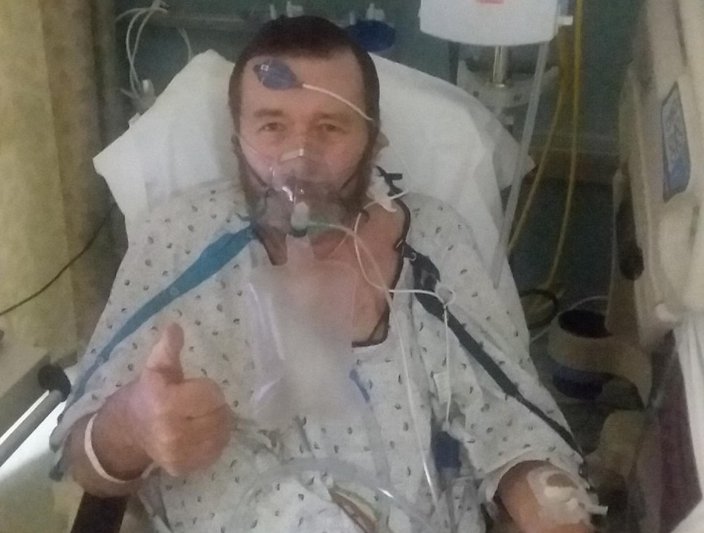 Thomas Williams was receiving up to 50 liters of oxygen per minute prior to receiving a single-lung transplant at Temple University Hospital in March.

'The only choice that there was'

Williams had undergone femoral-femoral bypass surgery at Deborah in late December. He was placed on a ventilator for several days afterward. The procedure left him weak and vulnerable to infections.

In early February, Williams began feeling ill. After his temperature spiked to 101 degrees, his primary care physician instructed him to return to Deborah. He was admitted with COVID-19.

Williams' left lung previously had been significantly damaged by COPD. The condition – the result of decades spent smoking cigarettes – had required him to be on oxygen support nightly. Now, the coronavirus rendered his good lung useless.

Williams had known a lung transplant might be necessary when he left Deborah, but he had hoped Temple might find another course of action. That wasn't to be. Without a transplant, Williams said he would have been restrained to a hospital bed and stuck on oxygen – and that might not have lasted long.

"The COVID destroyed the lung to the point where the best course of action for me was the lung transplant," Williams said. "There wasn't a lot of time to think about it. But for quality of life in the future, I think it was the only choice that there was."

Surgeons performed Temple's first COVID-related lung transplant in January, joining the small – but growing – number of U.S. hospitals that have completed one. The hospital has performed three more, including Williams', as of April 30, according to data from the United Network for Organ Sharing.

(Read about how Temple and Penn are among the health systems at the forefront in COVID-related lung transplants.) 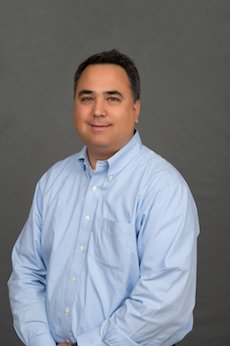 "These are very highly-selected patients," said Dr. Sameep Sehgal, an assistant professor of thoracic medicine and surgery. "This is not every patient with COVID who gets bad lung disease. They do go through a pretty intense selection process before actually getting a transplant. This is a pretty small subgroup of all the patients who get very sick with COVID and have lung damage."

To be eligible, organ dysfunction must be limited to the lungs. Patients must be clear of certain infectious diseases. They can't be very overweight or underweight. And they must be able to complete post-transplant rehab, among other qualifications.

It took several days for Williams to complete the tests necessary to determine his eligibility status and calculate his lung allocation score – an important factor for determining priority for transplants.

Williams was placed on the transplant list March 15. The wait began. 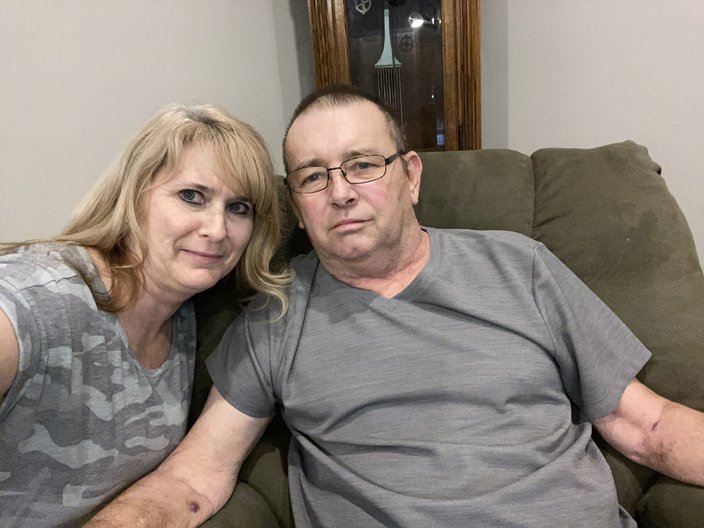 Thomas Williams, right, says it was 'amazing' to finally speak to his wife in person after a three-month hospital stay that included a single-lung transplant.

After his surgery, Williams spent another month in the hospital before being discharged. At one point, he was sent to MossRehab, but some bleeding in his lung promptly brought him back to Temple.

Williams had spent most of the last three weeks recovering at his home in Bass River Township, Burlington County, with his wife, Maggie, and two children until a setback hospitalized him several days ago. But he expects to be discharged shortly.

"We were so excited for him to be home," Maggie said. "We could not wait. But it was very scary as well, because he was still very weak. ... With a transplant, there's so many new things. It's a new way of life."

I don't think that I'd be alive if it wasn't for those people at Temple. I really don't. – Thomas Williams, lung transplant patient

Due to his weakened immune system, even meals require particular attention. To avoid food-borne illnesses, Williams can't eat certain salad dressings or cheeses. Deli meat must be heated. Potatoes have to be scrubbed and soaked in water before being peeled.

Each week, Williams undergoes a blood draw and receives several days of rehab. Occasionally, he returns to Temple for follow-up visits.

"As long as he stays free from any infection, we hope that he can have a very good, excellent quality of life as a new transplant patient," Marchetti said prior to his recent hospitalization. "His prognosis is good."

Before his battle with the coronavirus, COPD had impacted Williams' quality of life. During a vacation in the Blue Ridge Mountains last September, his breathing was so poor that he needed to take breaks while he was walking and he napped a lot.

He also needed a small amount of supplemental oxygen overnight. But he no longer does.

Williams is still weak, but he said he is regaining the strength and stability he lost while he was hospitalized. Though he mostly relies on a walker, he can walk without assistance for short periods.

He hopes to regain enough strength to enjoy the outdoor activities he loves.

"He's determined to get his boat on the water," Maggie said. "He's a hunter. He's looking forward to doing that, as well, this year. We're very hopeful that this is going to be different."

For now, Williams is grateful to have face-to-face conversations with his extended family and close friends on his porch – even if they must be physically distanced because of his suppressed immune system.

Williams said the lack of in-person contact weighed on him during his three-month hospitalization. Due to COVID-19 protocols, he only saw Maggie four times – and on one occasion, it was a mere wave as he was transferred to MossRehab. The final time was when she arrived to bring him home.

"Emotionally, it was amazing to see my wife, to see my kids, to be able to actually talk to people that you know, in person," Williams said. "It really plays head games with you being isolated from anyone that you know, other than (contacting them by) cell phone."

No one knows how COVID-19 patients who recieved lung transplants will fare long-term. But Williams is maintaining an optimistic outlook.

"I'm feeling much, much stronger and I count my blessings every day," Williams said. "I don't think that I'd be alive if it wasn't for those people at Temple. I really don't."