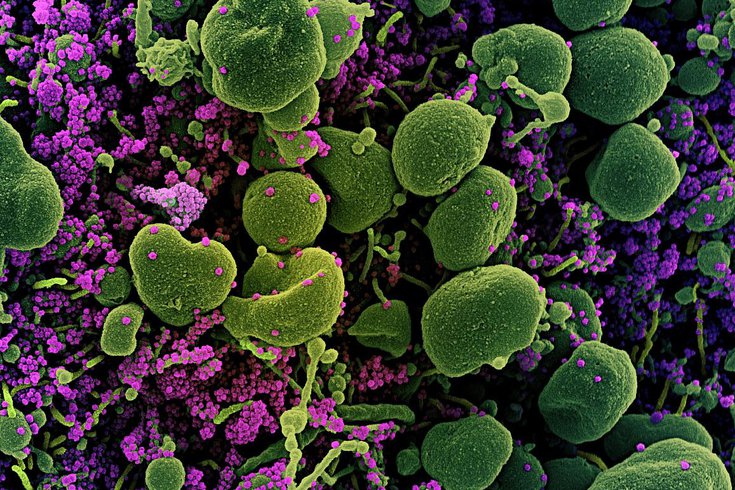 The cancer drug acalabrutinib reduced respiratory distress and inflammation among COVID-19 patients in a small study. Above, a colorized scanning image of a cell infected by the coronavirus.

Researchers are examining the possibility of repurposing a cancer drug to treat COVID-19 patients in severe respiratory distress.

Acalabrutinib, a drug approved to treat blood cancers, successfully reduced respiratory distress and inflammation in a small group of patients, according to a study led by the National Cancer Institute.

Acalabrutinib inhibits the Bruton tyrosine kinase protein, which plays an important role in B cell development. B cells produce antibodies needed to fight off a disease.

Inhibiting the TBK protein in COVID-19 patients is thought to reduce the hyperinflammation that can occur when the immune system's response becomes overstimulated – a common scenario among the most severe COVID-19 cases.

Both B cells and T cells produce cytokine proteins as part of the body's immune system response to outside invaders. An overstimulated response creates too many cytokines, prompting the body to start attacking itself. That causes organ damage.

Hindering the BTK protein is one way to reduce the level of cytokines in the body.

The researchers' study included 19 COVID-19 patients who were hospitalized with low blood-oxygen levels and evidence of inflammation. Eleven of them were receiving supplemental oxygen for at least two days. Eight patients were on ventilators.

Each patient received acalabrutinib for at least 12 days. They all showed some symptom improvement. The patients who were not on ventilators appeared to reap the most benefits.

The researchers from the Center for Cancer Research at the National Cancer Institute who led the study cautioned that their findings shouldn't be considered clinical advice. The drug still needs to be tested in a randomized, controlled clinical trial.

Acalabrutinib, sold under the brand name Calquence, was approved by the U.S. Food and Drug Administration in 2017. It is produced by AstraZeneca.

"Upon treatment with acalabrutinib, what they observed is an early indicator that they were shutting down very quickly the inflammatory pathway and patients' improvement occurred very rapidly," José Baselga, AstraZeneca's head of oncology research and development, told Forbes.  "I think the story is coming together, these patients have increased BTK activation, and in patients with respiratory distress if you block BTK, these patients get better."

The findings were published in Science Immunology and will be used to help design a randomized, controlled clinical trial. The clinical trial is sponsored by AstraZeneca.