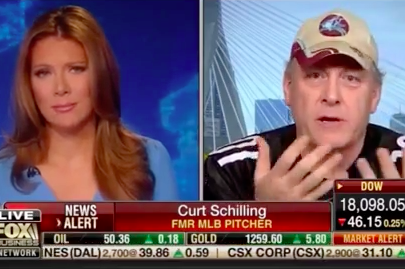 As the flood tide of allegations and video evidence continues to rise against Republican presidential candidate Donald Trump, one of his staunchest supporters took to FOX News on Thursday for an interview that became painfully awkward.

Former Philadelphia Phillies pitcher and fired ESPN analyst Curt Schilling went on FOX News for a talk with anchor Trish Regan about the latest Trump video released by CBS, a clip from a 1992 "Entertainment Tonight" feature that shows the businessman make a questionable comment about a 10-year-old child.

Schilling, an avowed conservative and anti-Clinton guy, attempts to defend Trump by suggesting that Regan — and every other normal adult person — regularly compliments the good looks of young children.

Without getting your head cut off, it's possible to argue that people frequently do point out a friend's "cute kid" or "handsome young man" — even a tactful "what a doll" or "beautiful young lady" could be acceptable — but to defend the Lolita-like escalation of Trump's remarks to dating again contorts one of the biggest underlying problems in all of these damaging leaks.

Apart from the offensive and sexist nature of Trump's comments, they reflect the will of a person whose sense of uncommon power and importance entitles them to act and make judgments that flout the behavioral norms even Trump's most vocal supporters have to respect in their personal and professional lives.

That doesn't mean Trump is incapable of a nice moment with a toddler in Wilkes-Barre, but it's important to ask whether he has ever truly wisened up and matured from these episodes in his life. Based on many of the comments he's made in the past year, let alone those he made ten or twenty years ago, that's hard to see.

Schilling recently reached a settlement with the state of Rhode Island over his failed video game company 38Studios, whose demise he ironically attributed in part to a lack of state support.

Of course, Schilling would love to see Trump in office for the next eight years as the setup man for his own run in 2024.