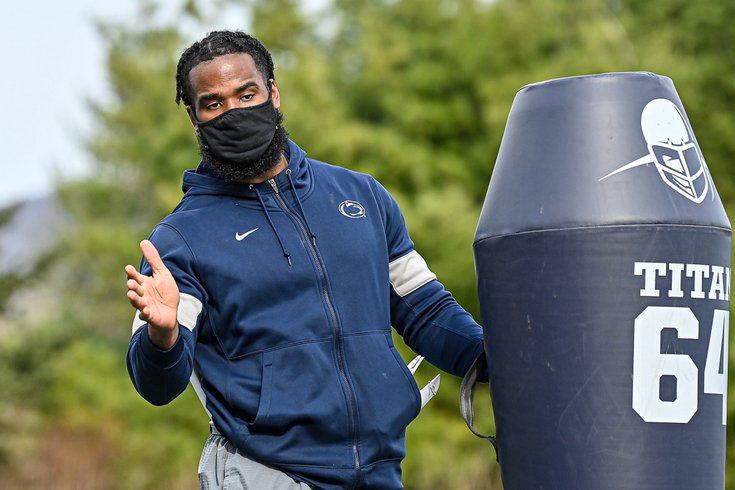 A few years ago, Phil Gormley received a call from Penn State coach James Franklin. Gormley, then Northeast High’s head coach (and now the athletic director at the school), had the impression Franklin was making the trek down I-76 to talk about some of his star players.

When he arrived, Franklin told Gormley that he did want to talk to some of his players, but he also added one more name to his list—Deion Barnes, then an assistant coach at Northeast. Franklin watched from afar as Barnes worked with former Penn State defensive line coach Sean Spencer, now the New York Giants’ d-line coach, during Penn State summer camps.

Franklin has a keen eye for talent. He was impressed by the way Barnes worked with the high school players and how much stock the 2011 Northeast graduate put into teaching.

Now, Barnes is beginning a new path in coaching in his second year as a graduate assistant under Franklin with the Nittany Lions. The connection has aided Barnes—and it’s aided Penn State with its connection to some of the area’s top talent.

“After playing football, most guys try to find a second passion or whatever they would like to do, because most guys from the ages of 8 to 23, 24, they’re consumed by football, and I was able to move on and play it for a living,” said Barnes, a 2014 Penn State graduate who played a short stint in the NFL with the New York Jets as an undrafted free agent in 2015 and then the Kansas City Chiefs. “At first, I was just trying to help. But I’m loving it right now. I love the process of seeing guys get better.

“I love coaching at my alma maters, Northeast and now Penn State. It’s an added pleasure for me, because I played here and I want to see Penn State be successful. I love coaching with coach Franklin, [defensive coordinator/linebackers] coach [Brent] Pry, and [defensive line] coach [John] Scott. I’m having the time of my life right now.”

A graduate assistant coach can be a thankless, grueling, long-hours, sleepless-nights job. For example, when 2020 NFL Coach of the Year Kevin Stefanski, the Cleveland Browns’ head coach, was a graduate assistant at the University of Pennsylvania he was reminded to get the oranges and make Dunkin’ Donuts runs.

“One season you're the captain of Penn, on the cover of the program and thinking that you’re hot stuff, and the next season, you’re the guy getting the oranges and getting [then-Penn] coach [Al] Bagnoli his coffee,” Stefanski recalled. “Do you love doing that? Not really. But like anything in this world, you do have to earn it. It was a good lesson at the time.”

Stefanski was 22 then, just fresh off a college field. Barnes is at a different station in life. He’s 28 and comes with an NFL pedigree. He isn’t fetching coffee and running around for the coaching staff.

"At Northeast, I was just coaching the defensive line. Here, I’m learning everything on a daily basis. I see a whole, bigger picture and everything makes sense now." — Deion Barnes

“But I am back at the bottom starting new again, and coach Franklin and coach Scott allow me to give input and coach the guys up,” Barnes told PhillyVoice. “I am at the bottom, but it doesn’t feel that way. I’m don’t consider myself an equal [to a fulltime coach]; obviously not. I do feel like I have a part to play in Penn State being successful, so as long as I’m doing that, and being a help to Penn State University, I’m good with it.

“I’m drawing cards, which is something everyone has to do, and doing the thankless jobs and working long hours, from 6 a.m. to 11 p.m. When the coaches leave, I have to do all of the quality control and charting plays. I’m learning a lot. At Northeast, I was just coaching the defensive line. Here, I’m learning everything on a daily basis.

“I see a whole, bigger picture and everything makes sense now.”

“Deion always put in the time when I had him as a player, and he did the same when he was on my coaching staff,” Gormley said. “Deion is a rising star. I saw the work he did with our guys, and I see how much he cares about teaching and coaching. He genuinely cares about the kids he’s coaching.

“When coach Franklin told me he wanted to speak to some of my players, but he was really there to talk to Deion, yeah, I was surprised, because I never had a major college coach come to recruit another coach [laughs]. But anyone that knows Deion, it really isn’t a surprise. Anyone who knows Deion knows he’s a phenomenal person on top of everything else. To see someone who I’ve known since he was 14 be this successful, I couldn’t be happier for him.

Barnes attributes his rise to old-school ways and what his father instilled into him.

“I believe in building relationships, like these guys are all my little brothers and that comes from my father," Barnes said. "He instilled hard work and dedication equals success, and it’s what built me. I had to go through adversity to get where I am.

“I’m not afraid to raise my voice, if I need to raise my voice. If that’s the way some guys need to be coached, that’s the way I’ll coach. I’m proud I come from Philly and my connection to the city. That will never change. When I speak to a kid from the Philly area I can relate to them, because I went through the same things that they’re going through.

“I bring out what a benefit Penn State is to them.”

Like it appears Deion Barnes is a benefit to Penn State.