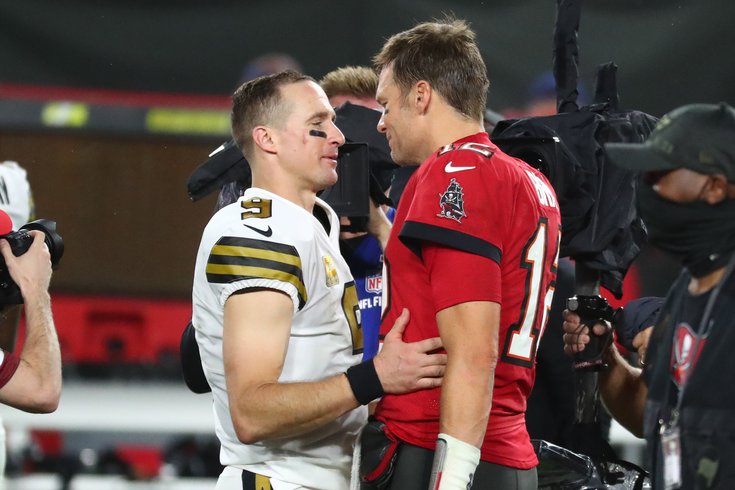 In a rare sighting, Tom Brady acknowledges another quarterback after a loss.

For the gambling enthusiasts, here are my divisional round NFL playoff picks. To note, the team logos indicate who I think will win the game, not cover the spread. At the end of the picks, I'll note a few teams that I like based on the spread. All the below spreads are courtesy of the consensus odds at TheLines.com.

Rams at Packers (-6.5): If I were to rank the quarterbacks remaining in the playoffs, it would probably look something like this:

We can quibble over positioning of some of those guys, but the point to be made here is that the top 6 is comprised of three first-ballot Hall of Famers, with a combined 9 rings, 7 MVPs, and 40 Pro Bowls. And then there's a dropoff to Mayfield, and then another one to Goff.

The Rams' excellent pass defense probably has the best chance of slowing down those quarterbacks, but they're just at such an overwhelming disadvantage on the quarterback front.

Ravens at Bills (-2.5): The Bills have kinda gotten screwed so far this postseason:

• They had the 2 seed the first year that the 2 seed no longer gets a first-round bye.

• In their first matchup, they had to play a very tough 11-5 Colts team.

• In that Colts game, the game should have been over with the Bills winning, but was prolonged by a call on the field that should have been easily been identified as a fumble, but wasn't, and then somehow wasn't overturned on review.

• In their second-round matchup, they no have to face a Ravens team that has won six straight games by a combined score of 206-102.

I don't care. This Bills team has excellent offensive and defensive balance, and I expect them to continue to handle difficult challenges.

Browns at Chiefs (-10): If I didn't watch the Chiefs just completely annihilate teams in the postseason last year once they decided to turn it on, I'd be tempted to take the Browns and the points, on their ability to hammer the run and shorten the game. But I can't.

Buccaneers at Saints (-3): As we noted in the hierarchy this week, you're going to hear someone say "It's hard to beat a team three times in a season." That's not at all true when one team already has a 2-0 advantage. Since 1970, there have been 21 times in which two teams faced off in the playoffs after one team swept the other during the regular season. The 2-0 team won 14 of those games.

This season, the Saints swept the Bucs, and as such, they should be seen as having a significant advantage. However, trends be damned, I can't help but acknowledge that the Bucs' offense is humming recently, as they have scored at least 31 points in each of their last four games (averaging 38 ppg over that span). It took a while for Tom Brady to gel with some of his receivers, but now that he has, that offense is playing really well, and they are loaded:

And then they have a good offensive line to go along with a pair of running backs in Ronald Jones (questionable on the injury report) and Leonard Fournette, whose running styles complement each other well.

Defensively, they have the No. 1 run defense in the NFL, which will force Drew Brees to beat them, an absurd thing to suggest as a negative with the Saints in previous years, but perhaps not as much anymore.

In my view, the Bucs are just... better... and I'm picking them to win outright.

• Picks against the spread: Buccaneers (+3).