What they're saying: What Haason Reddick brings to the Eagles' pass rush

Reddick improves the Eagles' pass rush, but they shouldn't stop there 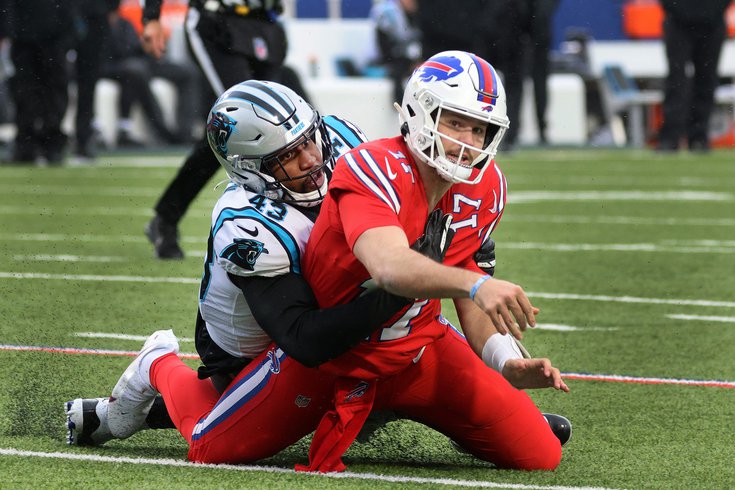 The Camden kid is coming home.

The Eagles agreed to a three-year deal with edge rusher Haason Reddick on Monday, fortifying their pass rush and in the process bringing a former Temple Owl and Haddon Heights product back to the Delaware Valley.

The self-described "weapon" will receive $30 million guaranteed from a contract worth up to $49.5 million. He's coming off a season in Carolina where he recorded 11 sacks playing in all but one game. And he isn't too far removed from a breakout 2020 season in Arizona where he had 12.5 sacks (granted, nearly half of them came from one game).

There were plenty of immediate thoughts and takes on what Reddick's deal means for the Eagles heading into 2022, so let's round them all up.

Here's what they're saying, starting with our own Jimmy Kempski...

GET TO THE QUARTERBACK

"The bottom line is that the Eagles sacked opposing quarterbacks 29 times in 2021, second-worst in the NFL. They needed more players who can get after the quarterback, and Reddick has proven over the last two seasons that he can do that. Gannon now has to find creative ways to get him as many pass rush opportunities as possible.

Even with Reddick now in place, the Eagles should still be in the market for an edge rusher in the first round of the 2022 NFL Draft. An edge rusher rotation of Reddick, Brandon Graham, Josh Sweat, and a rookie first-round pick to go along with Javon Hargrave, Milton Williams, and either Fletcher Cox or another high pick at DT cold be a dominant, disruptive group.

Oh, and he's a local guy who went to Temple, if that does anything for anyone." [PhillyVoice]

The Inquirer's EJ Smith echoes similar sentiments about Reddick, though he notes that the deal was made with limited cap space. The Eagles will either have to work with smaller signings, hit in the draft, or make a trade (a potential that one that might be tough for Eagles fans to swallow).

"The Eagles went into free agency with roughly $20 million in cap space, so Reddick’s deal will likely be the only big one they can afford. They’ll still have room to make smaller signings and could always clear a little space by trading players such as Fletcher Cox or Andre Dillard. They still have major holes to address at safety and cornerback.

Still, arguably the biggest area of need for the team going into the offseason was at edge rusher. Josh Sweat has developed into a starter-quality player, but Brandon Graham will be 34 next season and is coming off an Achilles tear. Genard Avery occupied the “SAM” role in the Eagles defense last season, but is entering free agency, as is Ryan Kerrigan.

It’s also a deep edge rusher class in the draft this year, which will give the Eagles the chance to double up on new additions at the position. Eagles general manager Howie Roseman said he’d be “surprised” if the team didn’t target edge rushers at some point this offseason." [The Inquirer]

HOWEVER, if you're going to spend, do it on the player that will give you everything you're looking for at his position. For The Athletic's Bo Wulf, Reddick offers that.

"If you’re going to spend serious money in free agency, you want the player to check a few important boxes. Is the player going to affect the passing game, whether on offense or defense? Is the player durable? Is he reasonably expected to stave off physical decline over the course of the contract? Is there an easy projection for how the player will transition to his new scheme?

'There and Back Again'

Reddick's story is Philly to a T, and Matt Mullin wants to make sure you know it.

"Temple fans may already be familiar with Haason Reddick’s story prior to him becoming one of the more dangerous pass-rushers in the NFL, but it’s certainly one all Eagles fans should know now that the Birds have agreed to a lucrative three-year deal with Reddick." [The Inquirer]

The Eagles can, and probably should, pick up another pass rusher with one of their first-round picks. But having Reddick already on the roster ensures they won't have to overthink it.

"The Eagles signing Reddick hardly precludes the team from adding a defensive end with one of their multiple first-round picks in the 2022 NFL Draft. It allows them to not force a pick on the position but it’s hardly like the Reddick signing means they no longer need more pass rushing juice.

Assuming the Eagles didn’t sign him with a plan to overthink his role, this looks like a good deal for the Birds. It’s not a cheap price to pay but pass rushers come at a premium and Reddick is currently only 27 years old. He ranked tied for fifth among all edge rushers in Pro Football Focus’s pass rush productivity metric in 2020 and tied for 33rd in 2021." [Bleeding Green Nation]

Banner is years removed from the Eagles' front office, but that hasn't stopped him from frequently checking in on the team's moves. He likes the terms on the Reddick deal, especially since there's an increase to the salary cap.

Riddick is a steal at 15/. With the cap increase this yr & what’s coming, that is the best deal from the team side so far. So many teams needed a player like this, I assume he wanted Philly badly or a bunch of teams were sleeping. Quality guards and solid receivers getting more