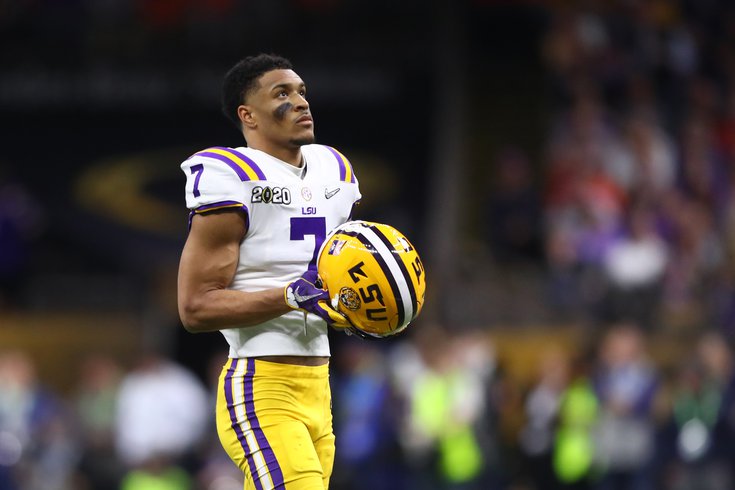 LSU S Grant Delpit is a popular choice for the Eagles in Round 2.

With Day 1 of the 2020 NFL Draft in the books, a bunch of nerds (self included) put out second-round mock drafts. Here's who some folks have the Birds taking with their 53rd overall pick.

Taylor's size and explosiveness have a "Frank Clark 2.0" feel, but there is still development needed.

Zierlein has the Eagles taking Josiah Scott, CB, Michigan State, in Round 3.

The Eagles declined Nigel Bradham's option, so there's a need for a linebacker in Philly. Wilson is a three-down player who projects as a rookie starter.

This is great value for the Eagles, who reached for Jalen Reagor in the first round. The Eagles can express confidence in Jalen Mills as Malcolm Jenkins’ replacement all they want, but right now safety looks like the Eagles’ biggest weakness outside of wide receiver and linebacker. The remaining wide receivers aren’t appealing, and linebacker is never a major priority with this team, right or wrong. Delpit is a first-round talent falling all the way to No. 53. Scoop him up.

The biggest concern with Delpit is his inconsistency as a tackler, although he dealt with a high-ankle sprain for part of his junior year. When healthy, Delpit is a long and rangy playmaker on the back end—he had eight interceptions and 24 passes defended over his three seasons in Baton Rouge.

Hanson has the Eagles taking K.J. Hill, WR, Ohio State, in Round 3.

A 6-3, 221-pounder whose diverse skills might eventually allow him to pick up where Malcolm Jenkins left off.

The Eagles have made big moves up front (Javon Hargrave) and in the secondary (Darius Slay) but need to shore up their big defensive weaknesses on the second level. Harrison's best qualities lie in how he flies upfield against the run and finishes so well as a physical tackler  at 6-3 and 247 pounds. He can grow and develop into a more viable cover man.

Iyer has the Eagles taking Michael Ojemudia, CB, Iowa, in Round 3.

The Eagles are looking at a cash-strapped future, so hitting on these picks will be vital. They drafted TCU receiver Jalen Reagor in the first round. Dantzler could make it back-to-back Bulldogs here. He is 6-2, but light at 188 pounds. However, Dantzler’s strength is in press coverage. He had five interceptions in his college career, coming off a redshirt sophomore season.

Mocks that provided no explanation: