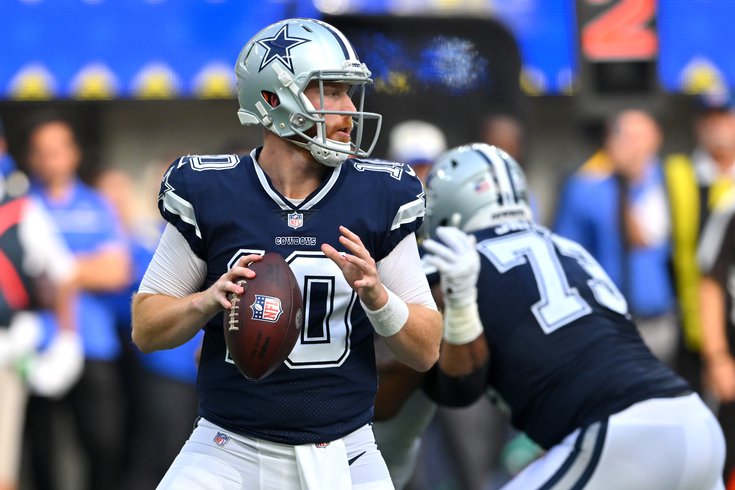 The Philadelphia Eagles are 5-0, while the Dallas Cowboys and New York Giants are both 4-1. The NFC East is back! On Sunday Night in front of a national audience, the Eagles and Cowboys will battle it out for early control of the division. It's kind of a huge game. Here are our five matchups to watch.

1) The Eagles' offensive line vs. the Cowboys' pass rush

Duh. This is the premier matchup in this game. The Cowboys are second in the NFL with 20 sacks through the first five games of the season. I was surprised to find that another team has more (the Niners have 21).

Micah Parsons is an NFL Defensive Player of the Year candidate, with six sacks and a forced fumble, a season after he had 84 tackles (20 for loss), 13 sacks, 30 QB hits, three forced fumbles and three pass breakups as a rookie. He is an athletic freak who ran a 4.36 40 at the Combine, which often makes him the fastest player on the field.

There are some offensive tackles that simply can't handle his speed.

MICAH PARSONS WITH THE GAME-WINNER

If I'm the Cowboys, I'm not wasting Parsons against Lane Johnson, who hasn't allowed a sack since 2020. I'm testing out a potentially still banged-up Jordan Mailata and/or Jack Driscoll on the other side.

Parsons is also getting help on the pass rush this year. Dorance Armstrong had a monster game last Sunday, and he has four sacks on the season, while DeMarcus Lawrence has three and Dante Fowler has two.

Years ago, Eagles offensive linemen got annoyed when the Cowboys' offensive line was often hailed as by far the best in football, when the Eagles' line, if healthy, was every bit as good or even better. I wonder if the Eagles' pass rushers will tire of hearing all about Parsons and the Cowboys' pass rush this week, because they too are having a impactful season, but without the tireless recognition.

Post-injury, the Cowboys opted to kick first-round rookie Tyler Smith out to LT, with a combination of Connor McGovern, Matt Farniok, and old friend Jason Peters filling in at LG. Peters has been the best of the bunch, but his snaps are limited and he's already injured.

Cowboys veteran OL Jason Peters suffered a chest injury that could cause him to miss multiple games. Peters played 14 snaps in Week 3 and 21 in Week 4. Cowboys were hopeful he could get more snaps this week. Now, it appears Connor McGovern will get the majority of work at LG

This is not a great Cowboys line. Tyler Smith has been hailed as a great find for the Cowboys through his first five professional games. Anecdotally in watching their games, I don't see it. He certainly has shown that there's promise for the future, but in the short-term, that's a matchup Josh Sweat should be able to exploit. Smith already has five penalties on the season, and according to PFF, three sacks allowed. The Eagles should be looking to take advantage Smith and McGovern on the left side of their line.

(I also like Haason Reddick's chances of making another big play against Terence Steele.)

Diggs had 11 interceptions and two pick-sixes last season, one of which came against Hurts:

Alabama to Alabama wrecked by Alabama.

The book on Diggs is that he will give up his share of big plays (he's allowing a very high 9.7 yards per target this season) because he is such a gambler, but you best not miss or he'll create a huge play. If the Eagles weren't the better team and they were perhaps looking to generate odds-flipping chunk plays down the field, I think that testing Diggs would be a reasonable choice. However, because the Eagles have so many quality weapons in the passing game, it's probably best to just stay away from him and attack guys like Anthony Brown and slot CB Jourdan Lewis, who are the easier marks.

Dak Prescott hasn't yet been ruled out for the Cowboys in this matchup, but it is expected that he will not yet be ready to play, and that Cooper Rush will continue to start for Dallas, according to Ian Rapoport of NFL Network:

The Cowboys are 4-0 with Cooper Rush as their starter this season. Rush is proving to be a smart, ball control quarterback who knows his limitations. He is not turning the ball over (0 INTs, 0 lost fumbles), while allowing the defense to win games.

While he has not made any game-wrecking mistakes, the Cowboys have also not generated many big plays down the field, as they only have 12 completions of 20+ yards this season, which is tied for the fourth-lowest in the NFL. They have 44 passing first downs, or just 8.8 per game. That's fifth-worst, in the company of teams like the Bears, Panthers, and Texans.

Gannon showed a season ago that his defense can shut down these types of non-dynamic quarterbacks. His challenge in this one will be to figure out how to confuse Rush into making a big mistake, which the Cowboys' last four opponents were unable to do.

On a side note, on the big play front, I thought this was interesting:

Longest plays so far this Cowboys season: a 45-yard catch, 46-yard run and a 57-yard run. All by Tony Pollard.

Pollard has become the Cowboys' big play threat in the backfield as Ezekiel Elliott continues his descent into "just a guy" territory these days.

5) The Eagles' rushing attack vs. the Cowboys' front

The Cowboys' offense, if led by Rush, isn't going to light the scoreboard on fire. If the Eagles want to avoid "the big mistake" offensively that can turn this game, they would be smart to rely on the rushing attack. They are probably more equipped to play the ball control game than the Cowboys, who have had no choice but to play that way offensively through the first five weeks. The difference is that the Eagles can also hit on big plays off of the smaller ones.

The Cowboys are loaded with edge defenders who can get to the quarterback, but their run defense can be a soft on the interior at times. This is a game in which guys like Jason Kelce, Landon Dickerson, and Isaac Seumalo can move guys like Neville Gallimore, Osa Odighizuwa, Trystan Hill, and Quinton Bohanna.

If the Eagles can have success on the ground, it would make life a lot easier in pass protection when they want to take their shots.