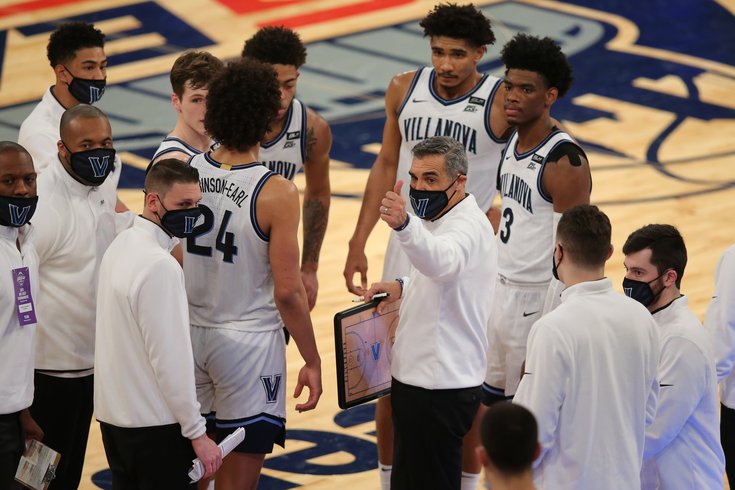 Jay Wright is one of the best college coaches ever. He’s also one of the small few who changed the game. In fact, one can argue that between his recent success and impact on the game itself, Wright is a top-5 NCAA basketball coach of all-time.

He’s also one of the most underappreciated Philadelphia sports figures I’ve seen and covered over the last 18 years. Ever since my first radio job in Atlantic City during the summer of 2004, to whatever I do now, it seems that Wright only comes up when he crosses our vision – the NCAA tournament and random Big “day of the week” game.

It’s not to chastise nor judge, rather a strange observation about what one of the most accomplished coaches in the game went through – like having two major sports radio stations debate (for weeks on end) whether his team deserved a parade down Broad Street.

If that doesn’t show you where Nova ranks on our sports hierarchy, nothing will. There’s more than just silver lining with that type of flying under the radar, as those same fans and media outlets rarely criticized him to anywhere near the levels of an Eagles or Sixers coach, even a Phillies manager.

So instead of being off the grid to avoid criticism, some of you might have missed the gem that was Wright’s time at Villanova, far more than just winning two national championships. He’s an amazing coach with rare feel for the game, especially as things get tighter and deeper in the NCAA tournament. Wright has shown an ability to maximize talent from whatever team he assembles (more on that) because of his seemingly easy way to connect to players as human beings.

His coaching and style – be it his way with kids or how he dresses – are secondary to the legendary impact he had on the game. Again, missed during the arguments of where a parade should be, or only shining a light on them during the Big East Tournament. One of the first things Wright did was establish dominance over the rest of the city – Temple included – through recruiting.

The genius of it wasn’t to lock down every single top prospect out of Philadelphia, rather challenge the giants of Jim Calhoun and Jim Boeheim in New York City.

“How dare this former Hofstra guy come back into our stomping grounds, and pull kids from us?” He dared.

This was the first layer that separated Nova from the other five schools in Philadelphia, but more importantly foreshadowed the same for the big guns in conference. It was more than a shot across the bow, rather a missile up the turnpike.

Next came what should be looked at as one of the more seismic shifts in college basketball, and how Wright was the true catalyst behind it. The first championship immediately validated Wright as a coach, and recruiter. Unlike the “Cals” or Coach “K’s” who relied on the revolving door of the 1-and-done kid, Wright provided an immediate alternative. You can come to Nova for a couple of years, improve your game, win a national championship, and still make it to the NBA.

Suddenly Duke or Kentucky didn’t mean as much, neither did Kansas. None of these schools that built their success on the highly volatile recruiting model could explain what Wright was doing. There wasn’t any corruption behind it and the rest of the college world was on notice.

The glue in this sandwich is Wright’s ability to make it work. His coaching and prep for each game, the time and attention he spent to recruiting worked, but only because he made it work on the floor.

Adding a second title in such a short span increased his awareness, boosted his profile, and put him in the same active category of success as any other coach on the bench. This wasn’t just a guy who won a couple of titles, it was the method behind it. Just look at those other powerhouses, they either struggled or started to adapt by adopting some of Wright’s philosophies.

Impacting guys like Mike Krzyzewski and John Calipari while winning a couple of titles. Sounds impressive.

I hope Wright does not go to the NBA for his own sanity. This job here in Philadelphia is not going to make or break winning a championship, and like Dawn Staley, we want our hearts to be rewarded more than anything else. Would Staley and Wright be better than Doc? Possibly. But both Staley and Wright have established legendary status and don’t need this. The headache and nonsense that comes with coaching a team that still needs work.

The Lakers are an absolute embarrassment and run (into the ground) by LeBron James. We just saw Frank Vogel helpless on the bench, emasculated at times by these ridiculous rosters built by James and his agency. Why would anyone want that life for Jay Wright? Why would he? The other options would be taking over the Knicks? Ugh.

I don’t know what is in store for Wright, be it TV or making some business a lot of money, but my vote would be to stay out of the NBA and just live.

It also gives us time to accurately reflect and highlight some of the larger impacts made on the college game by Wright.

Good luck, sir and thank you!

• The Sixers look really strong against this Raptors team but have to close this out in four. It’s not anything more than taking advantage of the time off before the next series. The Raptors threw everything they could at Philly in Game 3 and it didn’t work, so expect a physical game from a team that knows it’s beat. This is where coaching matters in the playoffs, knowing when to sit Embiid in a close-out game, with a lead, to protect him for the next round is imperative.

• The Phillies got out of Colorado with a win, but the time spent in Denver should serve as a good indication of what’s to come, mainly from the offense. The thin air gave us a glimpse of how these bats should wake up in the next month, inching closer to “hittin’ season.” The team looks different if the bats become more consistent, so put me in the group of not wanting to fire Joe Girardi. I am honestly not sure what anyone else is going to do outside of wait for the weather to get consistently warmer in south Philly.

• The only Deebo you are watching in Philadelphia this year will be knocking out DJ Pooh for his beach cruiser.