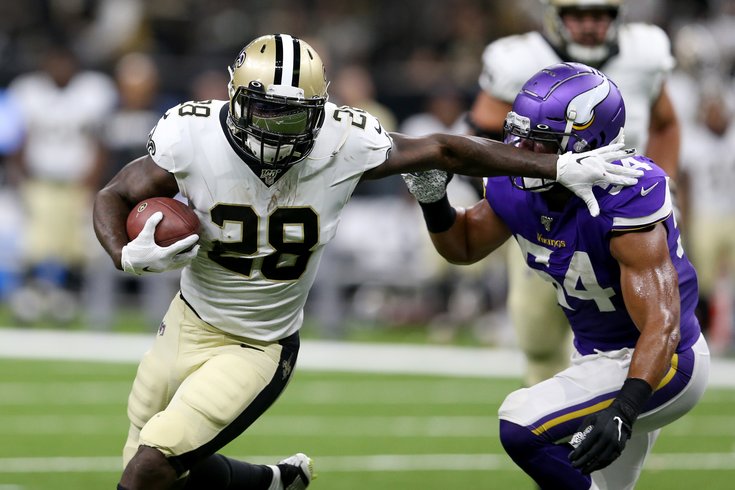 It's time to get to work.

Fantasy drafts are slated to start taking place over the next few weeks leading up to the start of the 2019 NFL season and we've got you covered.

After going through every team's starting (and backup) running backs, wide receivers and tight ends, giving you our full player rankings and breaking down how experts across the fantasy landscape see players' values, we are now going to dive into some sleeper picks.

By our definition, a sleeper is a player who we expect to overplay his value (average draft position, or ADP) in most fantasy leagues. This doesn't mean you should over draft the players we discuss below in the first round — only that getting them with a good value position (somewhere around their ADP) could wind up paying dividends.

We took a look at four quarterback sleepers already. Below are four running backs:

Jones had a ton of potential coming out of USC prior to the 2018 season, but he faltered and didn't see the field much for Tampa Bay. A new regime is in control under Bruce Arians this season and the team brought virtually no competition in for Jones and Peyton Barber.

Jones has been good this preseason and will have opportunities to not only act as the Bucs' backup RB but also to wrestle carries away from Barber if he plays to his potential. A late-round try with Jones could be rewarded this season.

If there's one running back room you want to be in this summer, it's the Bills. Rookie RB Singletary sits in meetings every day with LeSean McCoy, Frank Gore and T.J. Yeldon. He also watched them in practice and soaks it in like a sponge.

With a trio of veterans ahead of him, Singletary may not see a lot of action early, but he's young and spry and as a third-round pick the Bills want to see what they have in their new toy. Singletary has looked sharp in two preseason games — gaining 31 and 48 yards total respectively — and has some value in the passing game as well. He could wind up being a steal and keeper candidate next season if he works out.

Johnson is known as being a pass-catching back and with Houston he'll carry that role as well as serving as Lamar Miller's backup. In PPR leagues, he is worth a look somewhere in the 10th-14th rounds. Aside from an injury replacement for Miller, Johnson could find himself as a useful security blanket for quarterback DeShaun Watson.

With the Browns, Johnson has averaged 58 catches per year, gathering as many as 71 in 2017. Expect at least 50 this year.

Mark Ingram is gone, and Latavius Murray has arrived. Alvin Kamara remains a top-four fantasy player, but as in seasons past, goal-line runs will likely go to his backfield mate. At 6-foot-3, 230 pounds, Murray is projected by CBS to have eight rushing touchdowns. His upside could be as a 1,000 yard rusher and double digit touchdowns. He is worth the risk in the right spot.

The Saints have always used more than one back to a substantial degree and Murray is a player who could outperform his mid-round current ADP.