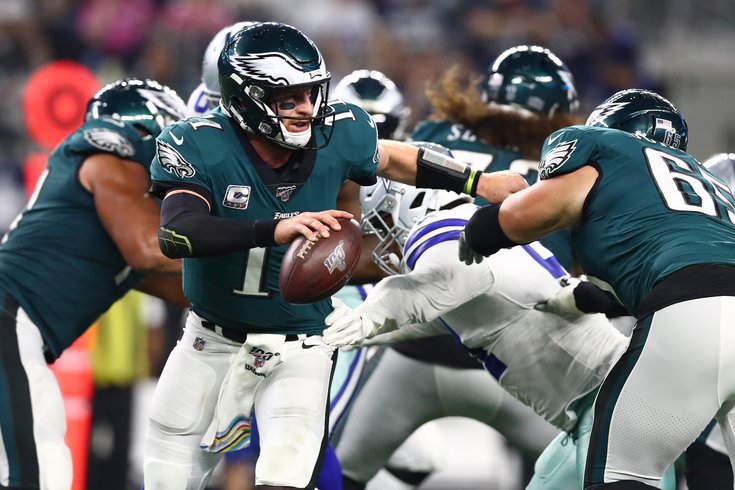 We're less than 24 hours from kickoff between the Eagles and Cowboys in what will essentially be a de-facto NFC East championship game between these two longtime rivals.

We've already broken down the injuries, offered up our own predictions and rounded up many more from the local and national media. Now, as we do every weekend, let's take a look at some numbers to watch during this NFC East showdown in the form of our five over/unders...

The current total being offered over at Bovada is actually 46 points, but we bumped it up to 46.5 since that's where we've seen it at other sports books — not to mention the fact that betting on a whole number isn't really fair. And when you look at our staff predictions, all five of us are projecting at least 47 points, with a few of us picking totals in the 50s. But with the Eagles down to a bunch of practice squad guys at wideout and Dak Prescott playing through a shoulder injury that could prevent him from taking deeps shots against a susceptible Philly secondary, shouldn't we be leaning toward the under?

Well, the Cowboys just rolled the Rams with Prescott playing at least half the game with that injury, plus they can beat you just as easily by running down your throat with Ezekiel Elliott. And those Eagles practice squad players, specifically Greg Ward, have actually looked pretty good in recent weeks as Carson Wentz might be playing his best football of the season — and the Eagles still have other weapons like Zach Ertz and head-turning rookie Miles Sanders. So there's still some reason to believe points will be scored on Sunday.

Both teams are in the middle of the league in scoring defense and both have shown the ability to put up points on less-than-stellar defenses. The Eagles have averaged 30.3 points per game over the last three weeks while allowing opponents to score an average of 27 points. Over that same span, Dallas has scored an average of 27.7 PPG while allowing 26  per game. Expect the some points in this one, despite the injury limitations on both sides.

As we just mentioned, Wentz has been playing his best football of the season in recent weeks, especially when it matters most — he has been nearly perfect late in games the last two weeks as he lead his team to back-to-back comeback wins over the other two NFC East teams. Whether or not the Eagles ultimately make the postseason this year, this has been a crucial stretch for Wentz' development, as it's the most meaningful late-season football he's played over his first four seasons after missing the playoffs due to injury in each of the last two years. The Eagles have essentially been playing playoff games for several weeks now, as they've needed to win to keep their playoffs hopes alive and remain in control of their own destiny down the stretch.

And, fumbles aside, Wentz has performed admirable in the clutch, despite missing his top running back in Jordan Howard and his top two wide receivers in DeSean Jackson and Alshon Jeffery. That's not nothing, and if nothing else, it will be some nice momentum for Wentz to carry forward if the Eagles ultimately fall short of the playoffs. And if they do beat Dallas and go on to win the division, then he'll get his first real taste of the playoffs in front of his home crowd. So either way, Wentz is doing some serious growing over the final weeks of 2019, and that's a promising sign moving forward.

But this weekend's matchup is the true test, and the Eagles will have to hope it goes better than his first time facing Dallas this season, a game in which Wentz curiously only passed the ball 26 times (his second-fewest attempts of the season) despite playing from behind all day. Wentz still managed to turn the ball over three times, including a pair of lost fumbles, and failed to reach 200 yards through the air. While Wentz has looked much better in recent weeks after a tough two-game stretch against the Patriots and Seahawks, he hasn't faced much competition in the Dolphins, Giants and Washington. That level of competition — and pressure — will be turned up on Sunday, so it wouldn't be shocking to see Wentz' numbers take a slight hit against a better opponent. His passer rating over the last three weeks has been a 99.8, and while I don't see a huge dip, I think he falls just short of hitting that 94.5 number listed above.

This is easily the hardest one I have listed here, and given his injury status, I don't even know why I included it, but here goes...

Dak Prescott has been very good this season, which might be a tough sentence for Eagles fans to read given the constant comparisons between him and Wentz, but it's the truth. And if he is indeed hampered by his shoulder, than the Birds are catching a major break on Sunday. However, the fact that Prescott didn't even appear on the Cowboys final injury report, despite being limited in practice all week, means that he'll be healthy enough to take the field. The question now becomes what "healthy enough" means for the Cowboys. Just because he's going to play doesn't guarantee that he'll be anywhere near 100% — it simply means that whatever percentage Prescott is at is better than whatever backup Cooper Rush could give them. Given their ability to beat you with the ground game, the Cowboys may not feel like they need Prescott to be fully healthy in order for him to run the offense.

Of course, he could be fine to throw the ball downfield by Sunday, and that would spell trouble for an Eagles secondary that has struggled to stop opponents' top receivers this season — Amari Cooper caught five passes for 106 yards against the Birds earlier this season. Speaking of that last matchup, Prescott only threw for 239 yards in that game, but that was largely a result of the score of the game and the fact that Ezekiel Elliott was finding success on the ground. If Prescott is healthy in this one, he'll almost certainly hit the over, but given the question marks surrounding his injury, we just can't commit to that.

As it turns out, we're not done dealing with Prescott's injury, as his health could also play a huge factor in number of touches for Elliott, who we previously noted rushed for 111 yards against the Eagles. Last week, with Prescott's shoulder hurting so much that he reportedly said he "wasn't going to pass out of the RPO no matter what," Elliott went for 117 yards on 24 carries against the Rams.

Amari Cooper to me said he figured something was wrong with Dak Prescott during the Rams game because he told Michael Gallup that he wasn't going to throw the RPO no matter what the read was. Cooper: "That is not like Dak, so I knew something was up."

It's hard to imagine that will be the case again on Sunday, or the Cowboys likely would've been forced to start Cooper Rush, but that doesn't mean that Dallas won't lean on Zeke and rookie Tony Pollard.

The Eagles defense is still third in the NFL in rushing yards allowed, and they've given up more than 125 yards just twice this season, but their worst performance of the season came back in Week 7 against Dallas, when they surrendered 189 yards on the ground. And with Dak's health still a question mark, the Eagles are likely to get another healthy dose of Elliott and Co. on Sunday afternoon. Keeping him under 100 yards in this one would go a long way toward them stealing a victory, unfortunately...

After being sacked a ridiculous 56 times last season, Dak Prescott has been sacked just 18 times in 2019 and is on pace to be sacked just 20.5 times this season, which would be a new career low for the fourth-year quarterback. Three of those sacks, however, came when he faced the Eagles on just 30 drop-backs.

This time around, however, the Eagles could struggle to get to Prescott. In the seven games since that meeting, Prescott has been sacked just eight times, and four of them came in just one game (vs. BUF). Aside from the otherwise solid play from their offensive line, another thing working against the Eagles is ... you guess it, Prescott's injury. If he indeed is going to struggle to throw the ball down the field, there aren't going to be many deep drops to give the Eagles defense the they need to get to the quarterback. Between that and Prescott's ability to escape pressure and extend the play, it's hard to take the over here. Two sacks would actually be a decent showing from the Birds defense in this one, and I think that's what they finish with.