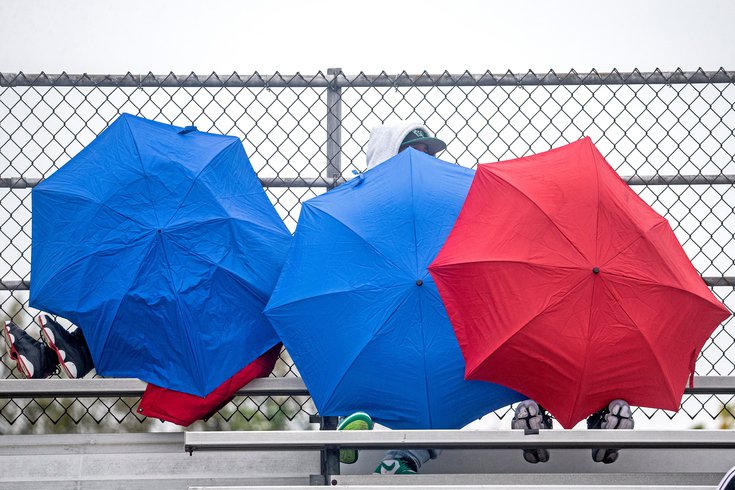 The remnants of Hurricane Ian soaked the Philadelphia region with rain most of the weekend and into Monday, resulting in a flood advisory to be issued for coastal areas. Windy conditions and rain are expected to continue through Tuesday. This image shows spectators with umbrellas at a high school football game near Wilmington, Delaware, on Saturday.

The remnants of Hurricane Ian, the Category 4 storm that devastated Florida before hitting the Carolinas last week, soaked the Philadelphia region with rain most of the weekend and into Monday, resulting in a flood advisory to be issued for coastal areas.

Windy conditions and rain are expected to continue through Tuesday, according to the National Weather Service's forecast. Due to all the precipitation, a coastal flood advisory is in effect from Monday at 1 p.m. through Tuesday at 9 p.m.

The advisory covers Philadelphia, Delaware and Lower Bucks counties in Pennsylvania, and Gloucester, Camden and northwestern Burlington counties in New Jersey. The lingering remnants of the Ian system changed from tropical to subtropical storm before reaching this area.

At this level of flood advisory, the Delaware River could flood vulnerable roads, resulting in partial or full road closures. The NWS says motorists traveling in these areas should allow extra time to reach their destination and warns people never to drive around barricades or through standing water where the depth is unknown

Coastal Flood Advisory from 1PM 10/3 TO 9PM 10/4 for the Delaware River. Do not drive through flooded roads. https://t.co/sUvApEImJp

In September 2021, when the remnants of Hurricane Ida flooded portions of Philadelphia, the river had crested at 16.35 feet, which was nearly a foot the river's major flood stage.

Storms from Hurricane Ian affected parts of the Jersey Shore and Delaware, where coastal flood warnings also are in effect.

At the Jersey shore, roads in low-lying areas, like parts of Landis Avenue in Sea Isle, were flooded, and the Ocean City School District opted to dismiss students early Monday due to possible flooding.

Hurricane Ian slammed the southwest coast of Florida on Wednesday afternoon with record-breaking storm surges, causing catastrophic damage. At least 100 people in Florida have died due to the hurricane, officials says, and four deaths in North Carolina have also been linked to the storm.