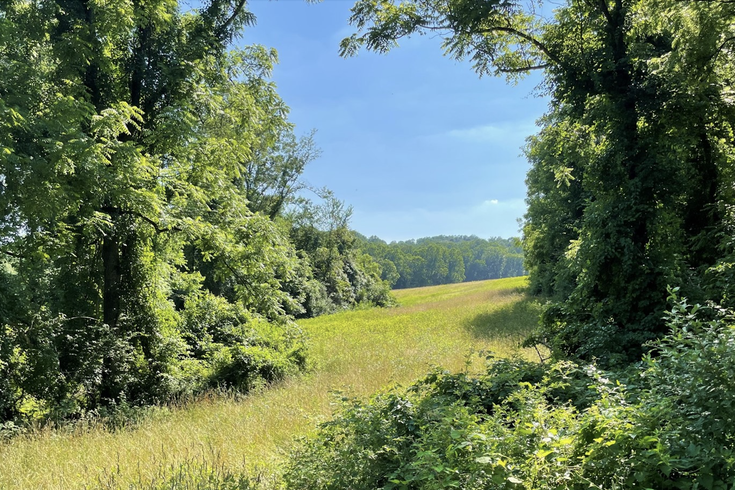 A large tract of land along Pennsylvania's southern border in Chester County has become one of three new state parks unveiled Tuesday by officials with the Department of Conservation and Natural Resources. The $45 million investment marks the first expansion of the state's 121-park system since 2004.

The tentatively-named Big Elk Creek State Park covers 1,712 acres acquired through The Conservation Fund, with assistance from the Mt. Cuba Center and Chester County. The area along the creek in Elk and Franklin townships is about 60 miles southwest and roughly an hour's drive from Philadelphia. A small sliver of the land also enters New London township, a DCNR spokesperson said.

The new park — along with two others in York and Wyoming counties — will be open to the public immediately with limited amenities for visitors until the state develops facilities on the land.

The property in Chester County features 3.5 miles of Elk Creek, which is a tributary of the Elk River and the Chesapeake Bay. A large portion of the land, the 978-acre Strawbridge property, was purchased by The Conservation Fund and transferred to DCNR in 2009 as part of a larger acquisition and conservation effort completed in 2020.

The area was formerly owned by the du Pont family and later the Strawbridge family, known respectively for the multinational chemical company and the former department store.

Combined with the 5,300-acre Fair Hill Natural Resource Management Area in Maryland, the area is one of the largest green spaces in the Mid-Atlantic region.

“Our beautiful state parks are among the finest in the nation,” Gov. Tom Wolf said Tuesday. “I'm proud to have secured funding in my final budget to make this investment in our park system which will not only preserve invaluable natural resources and habitats for wildlife but provide in-demand access for Pennsylvanians to enjoy the beauty of nature and recreational opportunities.”

The Strawbridge property contains a mix of rolling farmlands, open grasslands, wooded terrain and stream corridor. It's home to more than 690 plant species, including orchid varieties and a species of trillium that are considered endangered or rare in Pennsylvania. The land also provides habitat to a wide range of wildlife, from deer and rabbits to birds and more uncommon species, such as the short-eared owl and fritillary butterfly.

Big Elk Creek served as an important transportation route and natural resource corridor for indigenous populations in the Mid-Atlantic region. The area later became an influential escape route for the Underground Railroad.

“We are proud to welcome Big Elk Creek into our wonderful network of state parks,” Cindy Adams Dunn, Department of Conservation and Natural Resources secretary, said. “The addition of this park in one of the fastest growing areas in Pennsylvania will provide healthy, safe access to the outdoors for generations to come."

Open space preservation has become a growing priority in Chester County in response to the pressures of development and climate change. An annual report from the planning commission shows that in the decade from from 2011-2021, the percentage of the county's open land — including all parks, easements and land trusts — has increased from roughly 25% to just over 30%.

In July, it was announced that a 15-acre farm in the Landenberg section of Franklin Township will be permanently preserved to protect a drinking water resource that serves northern Delaware.

The Wolf administration said Tuesday that the three new state parks should be fully operational in 2026.

Vosburg Neck State Park, a 669-acre property in Wyoming County, will include hiking and shared-use trails in addition to public access for water-based recreation to the North Branch of the Susquehanna River.