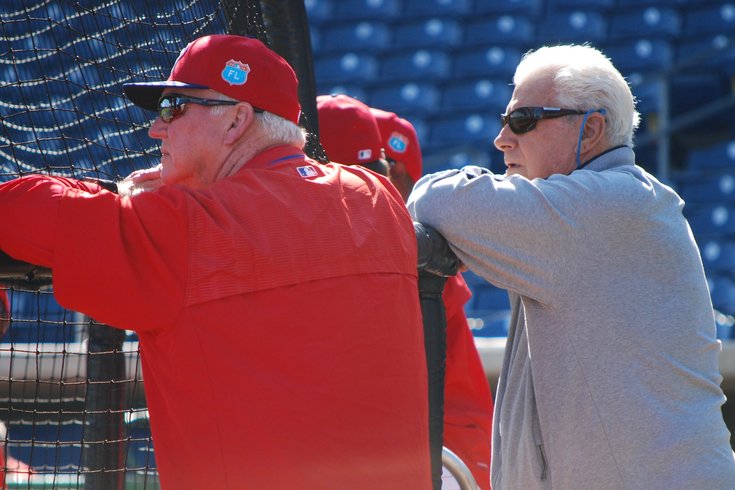 Charlie Manuel and Dallas Green, the only two managers to guide the Phillies to World Series titles in the franchise's 134 years of existence, watching batting practice in Clearwater, Fla., in February of 2016.

CLEARWATER, Fla. – The news of Dallas Green’s passing spread throughout the Carpenter Complex just as everyone was leaving for the day on Wednesday, not long after the Phillies exhibition game with the Yankees had wrapped up at Spectrum Field in Clearwater, Fla.

Larry Bowa, the current bench coach, former manager, and World Series-winning shortstop, didn’t know until just before he reached his car in the parking lot. And then, when he returned home for the night, he couldn’t get the news out of his head.

Bowa sat on a picnic bench just inside the third base line at the team’s Spring Training ballpark on Thursday morning, occasionally fighting back tears as he recalled a sleepless night filled with memories of his former manager.

“Last night was probably the toughest since I’ve put on this uniform,” Bowa said. “This spring, him not being here, you miss that, ‘Hey Bow’ that you hear from three fields away. You miss that. You miss that.

Bowa’s personality clashed with his tough-love manager 40 years ago. But, like everyone else who played for Green, he respected him and learned to love and appreciate the man over time. In fact, Bowa is one man in the Phillies organization who is currently carrying Green’s ethos over to a new generation of players.

“A lot of these guys probably don’t even know Dallas Green which to me is a shame,” Bowa said. “If you do your homework, [he] and Paul Owens are the guys that basically put this thing in motion and made this organization what it is has been.

The man who followed Bowa into the manager’s office at Citizens Bank Park, Charlie Manuel, didn’t exactly have a managing style similar to Green’s.

The two even clashed in the early days of Manuel’s tenure as Phillies manager when Green, never one to hold back an opinion, criticized Manuel on a radio show. Manuel, a genial but proud man, wasn't too thrilled to be called out publicly.

Shortly after the incident, Green and Manuel bonded over dinner and drinks one night in Orlando.

The two were close enough that on October 29, 2008, the night Manuel joined Green as one of just two managers to lead the Phillies to World Series championships in the 134 years of the franchise’s existence, they shared a few drinks together in Manuel’s office.

“I think I outdrank him, really,” Manuel said with a laugh on Thursday morning. “But, of course, when we won back in 1980 he outdrank me. … Everything about it was good. He was just as happy as I was. I can't tell you how happy I was. But he was every bit as happy as I was. … I showed him. When I look back, maybe he was testing me or having me show him. But I understood him and I think at the end he felt he understood me.”

Bowa, and the rest of the proven veterans in the Phillies clubhouse in the summer of 1979 didn’t quite understand their manager’s abrasive style. They often clashed, both in private and in public.

But, as Bowa came to understand, there was a method to his manager’s madness.

“I think there was one series where we didn’t play very good and he left the door open in the clubhouse on purpose,” Bowa said. “As we all know, that voice carries. And he said, you can tell those guys out there they ain’t as good as they think they are, as a matter of fact, he says, they couldn’t beat a lot of teams in this division right now. So obviously the writers came to mean and said, ‘Did you hear what Dallas said?’ I said, ‘Are you serious, did I hear what he said with the door open? Ask Dallas how many games he won in the big leagues?” So, I want to stay the writer, it may have been Ray Kelly, and obviously they couldn’t wait to go in and tell Dallas that. And then I hear a big, ‘Touche, Bo. Touche.’

“That’s one of the things he was good at. He wanted you to hear things. We had a clubhouse meeting once in Pittsburgh, I think we lost a doubleheader. The doors were shut. And then the writers come in and ask, what was that all about. I don’t know, Dallas being Dallas. And the next day everything that Dallas said was in the paper. And Dallas comes in and says, ‘Alright who’s telling the writers…” And I said, ‘Dallas, they heard what you were saying in the pressbox.' He was screaming so loud. He just had a presence about him that, eventually we got used to. It’s not that we ignored him. We knew exactly what he wanted. He wanted to win more than anybody.”

Green may have mellowed out a bit in his older days, but his baseball ethics remained intact.

Green wanted his team to out-work everyone else, for every minute of every game, and during the rest of their time at the ballpark, too.

“He is Philadelphia,” Bowa said. “I remember him telling me in the early 70s, if you’re not mentally tough you’ll get run right out of this city. And as I’ve watched, people that aren’t mentally tough in this game, they don’t last very long here. He got on a bunch of us for if you have good games you want to be in front of the camera and when you had bad games you hid. He says, you’ve got to take the good with the bad. Be honest with people. Tell them you had a bad game. Turn the page.”

Bowa began to choke up.

“And a lot of his philosophy and theories,” he said, “you know, last night was probably the last night as far as sleep, I didn’t get any sleep thinking about all of the stuff he used to tell us.”