Grocery shopping: Five college players to watch who could interest the Eagles in the 2019 NFL Draft 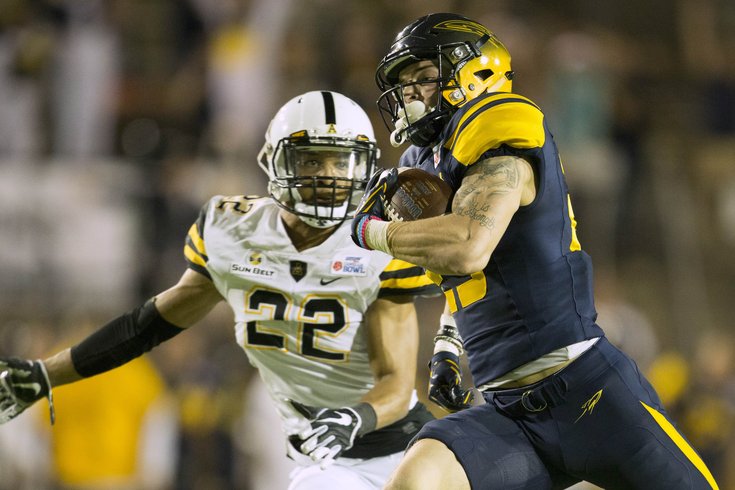 Cody Thompson is a big play threat for Toledo.

The first week of the college football bowl season is chock full of, um, football games? I imagine the only way any of will will actually be watching any of these games this week is if your TV just happens to be on and you're wrapping Christmas presents or something.

Still, in case you look up from time to time, here are five later-round players who could make sense for the Eagles in the 2019 NFL Draft, in which the Birds are projected to have 10 picks.

Over the last two seasons, Ejiya has 221 tackles (35.5 for loss) and 16 sacks. In recent drafts, good idea or not, the Eagles have prioritized production over athletic measurables. Ejiya is a downhill linebacker who makes plays in the backfield, and could a late-round depth option for the Eagles.

Scharping has experience playing both tackle spots on Northern Illinois' line, as well as a little bit of guard. The Eagles will value his versatility.

According to wrex.com, "he allowed just eight quarterback pressures on 469 pass blocking chances in 2018 and has surrendered just one sack over the past three seasons."

With Jason Peters likely to retire, the Eagles could use more tackle depth, and one who can play both sides would make sense, especially with Halapoulivaati Vaitai heading into a contract year in 2019.

There's no buzz on Bee that I can see (sorry), but this guy has some athleticism at his defensive tackle spot:

Over his four-year career at Marshall, Bee has 197 tackles (29.5 for loss), 18 sacks, and 2 forced fumbles. The Eagles need an infusion of youth on their defensive line, and I can absolutely see the Eagles having interest in Bee as a rotational interior defender.

Thompson is a former quarterback-turned-receiver, and the Eagles kind of have a thing for those guys, as evidenced by their acquisitions of Braxton Miller, Greg Ward, and Trey Burton.

Thompson also has an 18.5 yards per catch average over his career at Toledo, which the Eagles also covet. Over his career, he has 176 catches for 3257 yards and 30 TDs.

One of the glaring pieces missing from the Eagles' offense is a speed receiver who can make big plays. With Shelton Gibson being unable to get on the field after two seasons, the Eagles could use another mid-to-late-round speed receiver to develop if they can't land one early in the draft.

In addition to big play ability, Thompson also has great hands, as he has a very low drop rate.

Corbin's similarly-sized brother Bronson was a third-round pick in the 2016 NFL Draft, but he has turned out to be a bust (5 career tackles), though he's still on the Jets' 53-man roster.

At 6'9, 275, Corbin Kaufusi is absolutely going to draw interest from teams around the league because of his size-athleticism combination. As the below video shows, Kaufusi does indeed have quite a bit of upside:

In 2018, Kaufusi had 55 tackles (8.5 for loss), and 7.5 sacks. That's decent production that doesn't quite match what his brother did at BYU. Kaufusi could be a later-round developmental project for a team like the Eagles, who need help both now, and in their defensive line pipeline.