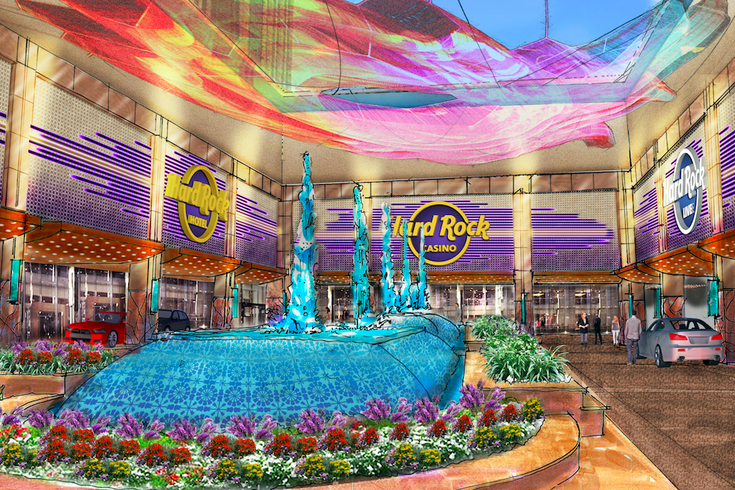 Artists rendering of the main entrance to Hard Rock Hotel & Casino Atlantic City. The 27-year-old complex is getting an almost-$400 million remake that will, among other things, remove the building's iconic minarets.

Here's a sentence you don't see too often: Things are going pretty well in Atlantic City.

I know it’s hard to believe, but these days, it’s true. For instance, according to state figures, the existing seven casinos are all operating in the black. And last weekend, the long-beleaguered gambling resort hosted three public events--including a beer-and-music fest--that drew a reported aggregate crowd of 50,000.

Tuesday, an Indiana-based company announced it was taking over a large chunk of Philly uber-developer Bart Blatstein’s Showboat hotel this summer to create a center for eSports in a bid for millennial dollars. And on Wednesday, Hard Rock International formally announced its purchase of, and plans for, the former Trump Taj Mahal.

This last bit of news may ultimately be the best of all for the seaside town that has spent a decade suffering the slings and arrows of outrageous (and debilitating) fortune. Since it closed last fall, the soon-to-be-minaret-less Taj, which opened 27 years ago this week, stood mostly as one of two remaining relics of Donald Trump's failed Boardwalk empire. But, barring any unforeseen catastrophes, roughly 15 months from now, it may represent the start of Atlantic City's next "golden age."

With all due respect to Borgata, the city’s long-time gaming and entertainment flagship, the newly christened Hard Rock Hotel & Casino Atlantic City has everything it physically needs to challenge the “Big B” as AyCee’s dominant player: a huge (120,000-sq. ft.) casino; 2,000 hotel rooms and suites (all of which, like the casino, will be remade top-to-bottom); a 5,200-seat multi-purpose arena; a 1,200-seat theater and tens of thousands of square feet of retail/restaurant space. Combine all that with a budget that could top out close to $400 million, and the value of the Hard Rock brand—which these days is a global hospitality-industry A-lister--and you have a virtual can’t-miss proposition.

As it should be, Hard Rock Atlantic City will be driven by its entertainment strategies. At Wednesday’s press conference at the Hard Rock Café—the only entity still doing business within the building—Hard Rock International CEO Jim Allen, an Atlantic City native who has worked more than a decade to bring the brand to his hometown, bragged that globally, his company books more than 30,000 (that is not a typo) performances a year. Partnerships with industry titans LiveNation and AEG means they should get first crack at virtually every big tour that makes sense within the confines of the seating capacity of the venues.

On a related note, Allen suggested that his joint will bring back something that’s been missing from Atlantic City’s show biz scene for many years: weeknight headliner bookings.

At this point, it needs to be said that historically, Atlantic City is no stranger to mucking up a good thing – which is another way of saying nobody knows whether Hard Rock will indeed be the engine that drives the town back to across-the-board success as a leisure destination. But at this early juncture, betting against it doesn’t seem like a particularly smart play.