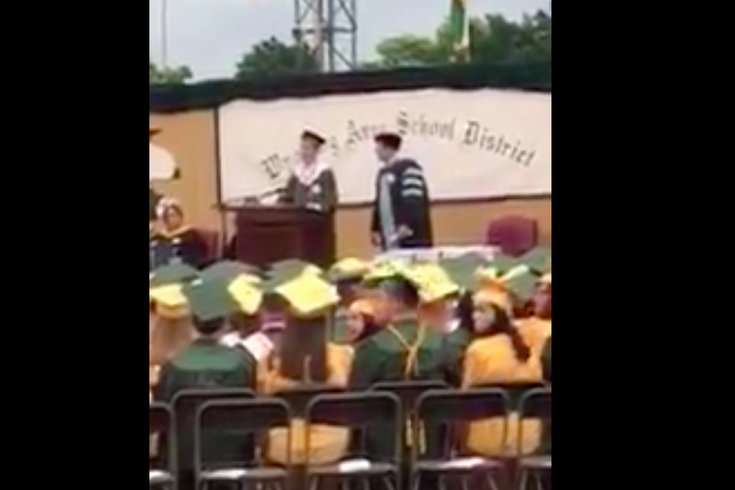 Peter Butera being asked to leave the stage during his graduation speech at Wyoming Area School District.

Butera, a new high school graduate of Pennsylvania's Wyoming Area School District, joined the ranks of infamous, defiant high school seniors with his graduation speech Friday, during which he called the school administration "authoritative " and had his microphone cut off.

In his speech, Butera praised some of the school's teachers and administrators, and thanked his fellow students for electing him class president all four years, something he called his "greatest honor."

However, at our school, the title of class president could more accurately be class party planner, and student council's main obligation is to paint signs every week. Despite some of the outstanding people in our school, the lack of a real student government combined with the authoritative attitude that a few teachers, administrators and board members have prevents students from truly developing as leaders. Hopefully, this will change.

Butera's was then muted as his mic was silenced, prompting some in the audience to yell "Let him speak!" As he left the stage, he got a standing ovation from his classmates.

Set to attend Villanova in the fall, Butera said he gave the speech with hopes of "improving" the Wyoming Area School District.

"That is not how progress is made," Butera wrote on Facebook. "By administration cutting the microphone, they effectively said that they will not change, and proved everything I had said in my speech to be true."

Wyoming Area Superintendent Janet Serino told The Citizen's Voice that students' speeches are vetted ahead of time and Butera went off script, which is why he was cut off.

School Board President Beth Gober-Mangan told the paper that she knows it looks bad, but administrators simply didn't know where he was going with it because it wasn't the version submitted ahead of time. She also acknowledged that Butera had some valid points.

Butera said he believes he got the point across, according to the Voice, presumably as he walked off into the sunset with one fist raised in the air.