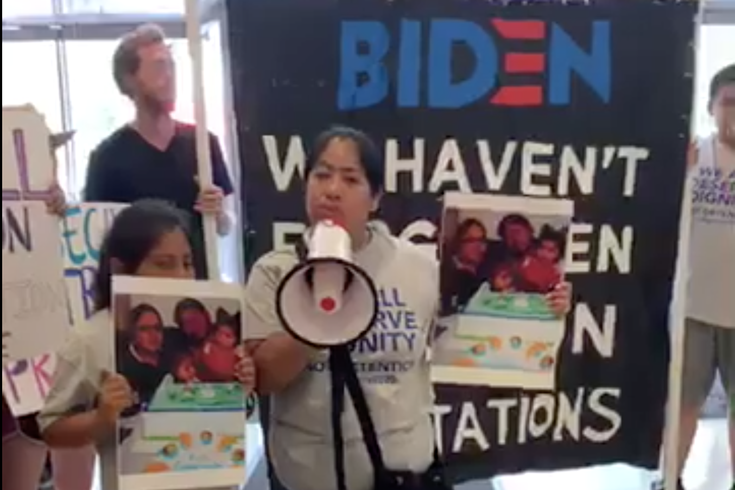 Movimiento Cosecha, an immigrant rights organization, organized a sit-in protest at Joe Biden's campaign headquarters Wednesday in search of an apology for the deportation of 3 million immigrants during President Barack Obama's presidency.

Six participants in a sit-in at Joe Biden's Centre Square campaign headquarters in Center City were arrested Wednesday afternoon, after hours of protests and demands for an apology from the former vice president of the United States.

Movimiento Cosecha, an immigrant rights advocacy group, organized the sit-in protest at Biden's headquarters and was seeking an apology from the Democratic presidential hopeful for the deportation of 3 million immigrants during President Barack Obama's presidency.

Arrests were just made as immigrants and allies continue to demand that @JoeBiden, and all presidential candidates, commit to an immigration platform that ensures dignity for all undocumented people.
➡️ https://t.co/zPLLKiP3Yi pic.twitter.com/llSsvIRWpE

California senator and presidential candidate Kamala Harris, however, claimed that Obama's policies allowed the deportation of people "who, by (U.S. Immigration and Custom Enforcement)'s own definition, were non-criminals."

Much of the recent conversation around immigration policies and immigrant detention has focused on President Donald Trump's administration, but Movimiento Cosecha's demonstration Wednesday was intentionally focused elsewhere.

"Opposing Trump’s policies and returning to a status quo of silent deportations is not good enough," the group said Wednesday on Facebook. "We must start a conversation about what dignity for immigrants really looks like."

The idea behind Movimiento Cosecho's sit-in Wednesday, the group said, was to remind the public, and press Biden, about the deportation of non-criminal immigrants.

Happening now: Allies are being threatened with arrests at @JoeBiden's campaign headquarters in Philadelphia after immigrant families shut down the building to share their stories of detention and deportation under Obama. #DignityNotDeportation pic.twitter.com/CqkITsh8rO

In response to Movimiento Cosecha's demands for an apology, the Biden campaign said it doesn't have a statement at this time:

Biden campaign said they don’t have a statement at the moment.
On the politics of this, Biden is relying on his VP record to appeal to black voters but that could also alienate Latino voters, especially young latinx voters.

Movimiento Cosecha was also behind a protest at Center City's Comcast building last July, when eight protesters were arrested during a national day of protests against U.S. Immigration and Customs Enforcement.