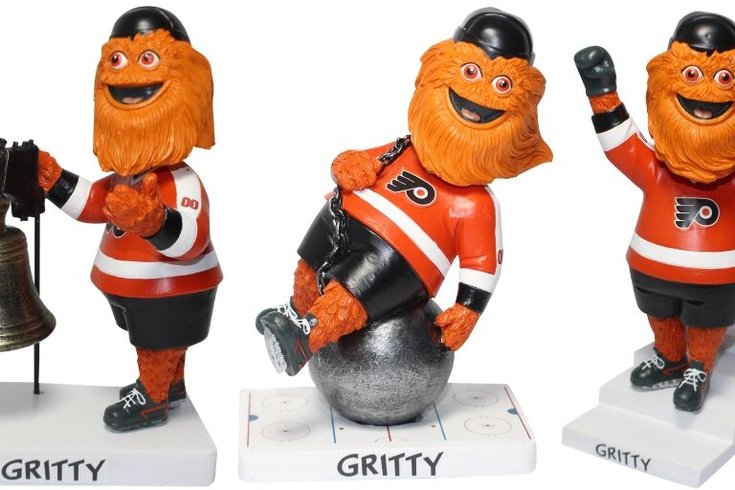 You know what they say - you can never have too much Gritty.

The Flyers’ mascot has taken over, not just Philly, but the world. With a growing international fanbase, this orange-haired creature is getting his likeness turned into three, very special, limited edition bobbleheads.

National Bobblehead Hall of Fame and Museum has unleashed unto the world three types of bobblehead Gritty - and really, it's all the best kinds of Gritty.

This includes Gritty's introduction to the world: “Wrecking Ball" Gritty, where a just-born Gritty came down from the ceiling of the Wells Fargo Arena as Miley Cyrus' "Wrecking Ball" played, announcing his furry orange presence to the world.

“Boxing Steps” Gritty is an ode to Philadelphia's other icon, Rocky. The mascot wears boxing gloves while standing on steps as he waves his arms in the air triumphantly. Though if you didn't think it could get more Philly - well, it does.

In the third bobblehead representation, the mascot stands close to one of Philadelphia’s greatest historical landmarks, the Liberty Bell.

Bobblehead Hall also released the first Gritty bobblehead in September. These new special edition bobbleheads are currently available for pre-sale only. Each bobblehead is $40 and $110 for all three. The company is only making 500 of each one, and it will be individually numbered.

These cutesy gifts are expected to ship in Feb. 2019. So, unfortunately, they won't make the best Christmas present - but it might just be the perfect Valentine's Day gift for the Gritty lover in your life. You can welcome these collectibles into your life by visiting their website and purchasing here.