After a quiet Saturday, the Sixers made a trade for center Tony Bradley on Sunday afternoon. 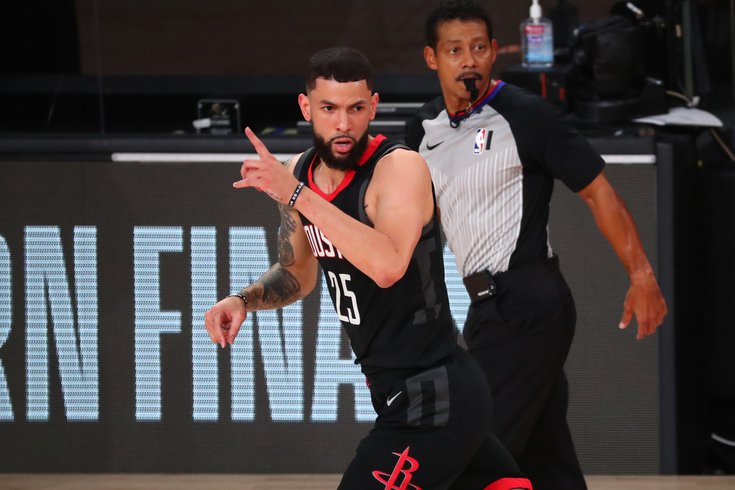 According to Adrian Wojnarowski, Austin Rivers won't be joining his father, Doc Rivers, with the Sixers. Instead, he will be signing with the New York Knicks.

Originally, the main section of this post was about reported mutual interest between Rivers and the Sixers, which was obvious not only because of his dad being the coach, but also because he spent the last two seasons in Houston with Daryl Morey. It appears the Sixers will have to turn their attention elsewhere if they're hoping to add depth at guard. As we mentioned on Sunday morning, Shabazz Napier and Langston Galloway remain available, so stay tuned as the Sixers still have one open roster spot (barring any additional moves).

UPDATE [4:28 p.m.] — Literally just as the Eagles' 22-17 loss to the Browns was wrapping up, Adrian Wojnarowski had a momentary distraction for Philly fans in the form of a breaking Sixers trade. Per Woj, and since confirmed by our own Kyle Neubeck, the Sixers are acquiring big man Tony Bradley from the Pistons in exchange for Zhaire Smith.

Bradley spent last season with the Jazz and was recently traded to the Pistons before being flipped to Philly. You can read more from Kyle on Bradley, his fit, and why the Sixers decided to move on from Smith after two seasons, right here.

UPDATE [12:00 p.m.] — This isn't necessarily an update on a moves that were made, but rather on moves that can be made. With the clock striking noon, teams and players can now officially sign deals that may have been agreed to in recent days. While we've been covering the latest news and rumors since Friday evening, this is the official start of free agency. Stay tuned...

Welcome back to another edition of our live NBA free agency and trade tracker. With so much happening around the league in this condensed offseason, it can often be difficult to keep track, but don't worry, that's precisely why we're here.

Following a busy start to the NBA offseason, Day 2 of free agency came and went without the Sixers making any moves, despite a flurry of deals being agreed to around the league. That's partly because Philly doesn't have a lot of money — or roster space — left to use up. If they don't make a trade, they basically have one open roster spot that will likely be filled by a player who they can lure with the $5.7 million mid-level exception or on a veteran minimum deal.

That on it's own severely limits the Sixers' options, but it doesn't mean they are without any. And, as seems to be the case each day, there's a new player being connected to the team. This one, however, already has a natural connection to the team and it isn't hard to figure out what that is.

In trading for Seth Curry, the Sixers already added new head coach Doc Rivers' son-in-law to the roster. Now, this team is on the verge of becoming a Rivers' family reunion as there's reportedly mutual interest between Philly and the coach's son, Austin Rivers.

Expect the #Sixers to take a long, hard look at Austin Rivers. Mutual interest for many reasons (one more than obvious).

Not only is Rivers' linked to the Sixers through his father, who also coached him in Los Angeles, but the 6-foot-3 guard spent the last two years playing in Houston, where Daryl Morey was running the show before leaving and taking the job in Philly this fall.

A primary bench player for most of his career, Rivers would bring some ball-handling depth to a Sixers team that is in desperate need of it, whether or not they see Simmons as the point guard. Rivers, an average shooter from the outside, had the best numbers of his career while playing for his father and the Clippers and now could find himself reunited with his old man in Philly.

Point guard depth continues to be a need for the Sixers, as does a potential defensive-minded forward, which has some wondering aloud on Twitter about a different sort of reunion in Philly: Dario Saric.

Saric was a good player and a fan favorite in Philly before he was traded to Minnesota in the Jimmy Butler trade. He's since been traded again to Phoenix, where he's now an unrestricted free agent. Unfortunately, given the Sixers' salary cap situation and the fact that they really can't sign anyone except on a veteran minimum or by using the mid-level exception, Saric would likely have to take a pay cut to return to Philly. He already has a qualifying offer from the Suns, and that's likely more than anything the Sixers can offer.

It's worth keeping an eye on that situation, but it feels more likely that, unless Morey and Co. have a big surprise trade waiting for us, the Sixers, will look to fill their roster with smaller complimentary pieces, like an Austin Rivers perhaps.

If the Sixers, who still have relatively long NBA Finals odds, according to TheLines.com, don't feel like dealing with a qualifying offer, they could look to Denver free agent Torrey Craig, who had his qualifying offer pulled by the Nuggets on Saturday, making him an unrestricted free agent.

Craig wouldn’t help the Sixers creatively and he’s an iffy shooter, but he’s a tough wing defender and a good locker room guy, from what I understand. Wonder what the market is. https://t.co/GmyjzRnQda

Shabazz Napier and Langston Galloway also remain as options for the Sixers. And, as Kyle Neubeck noted in his free agency primer, the team could bring back Glenn Robinson III if they opt to go with a forward instead of the guard/playmaker option.

In the meantime, we'll have you covered with all the latest news and rumors surrounding the Sixers (and the rest of the NBA) right here in our live tracker.