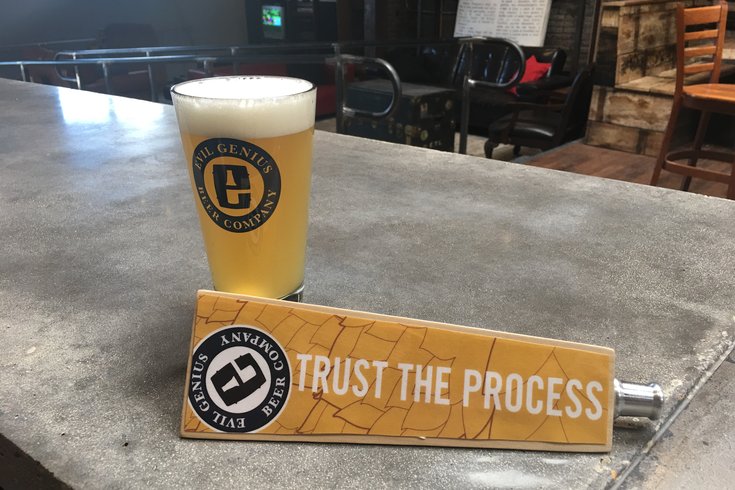 A first look at the "Trust The Process" IPA at Evil Genius Beer Company's new brewery in Fishtown.

If you’re a Sixers fan and the last month has left you feeling in desperate need of a drink, one local brewery has just what you need.

Evil Genius Beer Company, which was founded in 2011 by Trevor Hayward and Luke Bowen, a pair of Villanova MBAs who met while in grad school, has a new beer that’s arriving just in time for down-and-out fans.

And it's called “Trust the Process." 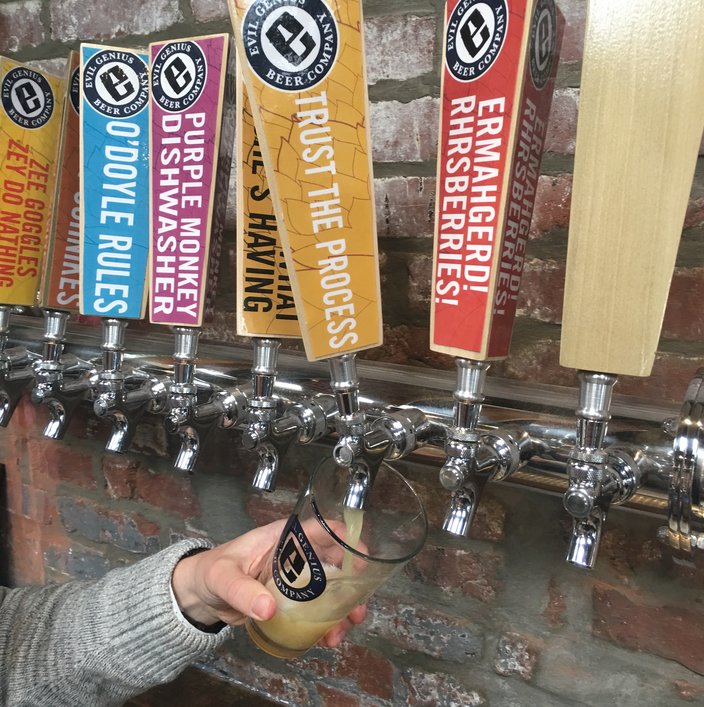 Pouring a pint of “The Process.”

The Galaxy and Amarillo IPA comes in at a healthy (and appropriate) 7.6% ABV and will soon be available at the new Evil Genius Brewery located on Front St. between Cecil B. Moore Ave. and Palmer St. in Fishtown.

“We really wanted to brew this beer because with us opening in Philadelphia and being such big sports fans,” said Hayward, 32. “We went through our own process expanding the company and especially building the brewery. I think people are going to enjoy it – maybe we can remind Sixers fans that sometimes patience pays off.”

So what should one expect from that first sip?

Since its founding, Evil Genius had brewed out of state, but always wanted to bring it back to Philly. And, five years later, the company is doing so in a big way.

“In October of 2015, we purchased an old carriage factory from the 1870s on Front St. that was in shambles - collapsing ceiling, exposed wires, you name it,” said Bowen, 34. “For the last 18 months, we have completely turned this place around - even managing to salvage wood from the original roof that were turned into our booths, benches and tables by the fantastic craftsmen at Philadelphia Wood Craft Company."

As for the brewing part of it, that's located on the other side of a glass divider a few feet away, and they'll offer tasting tours there as well.

"We installed a 15-barrel brewing system from Specific Mechanical System, and have been perfecting our opening tap list since the middle of January,” Bowen added.

The brewery and adjoining pub will feature 10 different varieties of Evil Genius beer to start – “Trust the Process” will be one of them – and will serve snacks, sandwiches and light bar food. It’s set to open to the public on March 8, with a grand opening celebration planned for the weekend of March 24. The space is also available to be rented out for private events.

If you're unfamiliar with Evil Genius, this isn't their first sports-themed beer, although it is the first that has to do with a Philly sports team.

Their other beer names include: "I'll Have What She's Having," "Purple Monkey Dishwasher," "This One Time At Band Camp," and "MA! The Meatloaf!"

You can find Evil Genius Beer on shelves all over the area, but their newest beer will be a brewery exclusive, meaning it’s only available on tap at the brewery. But don’t worry, you’ll be able to purchase growlers and crowlers (a can-growler hybrid) of “Trust the Process” to take home with you.

That way, losses like the 27-point drubbing they suffered on Wednesday night won’t hurt quite as much.