Chef Emily Riddell opened the French bakery in the Bok Building earlier this year, but it got its start as a wholesale operation 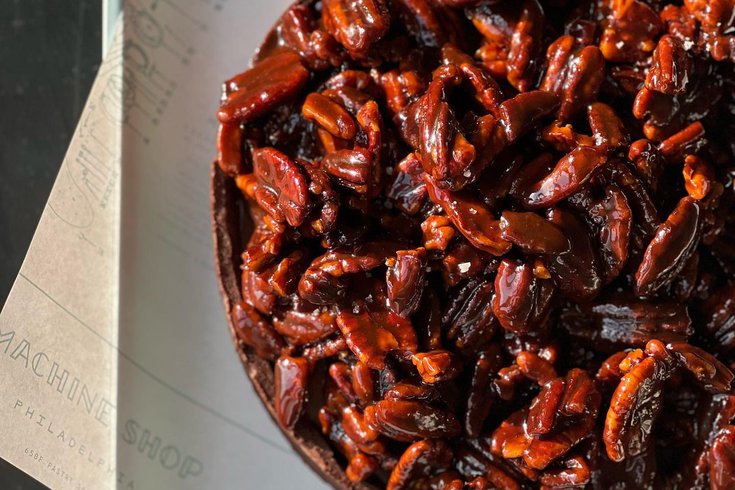 Machine Shop, a French bakery located on the ground floor of the Bok Building in South Philadelphia, was named one of Eater's best new restaurants in America.

Machine Shop, the French bakery on the ground floor of the Bok Building in South Philadelphia, has drawn high praise for its croissants since it opened.

Now, it has been named one of America's best new restaurants by Eater, which heralded chef Emily Riddell's mastery of pastry techniques. The bakery offers croissants, danishes, cakes, tarts, cookies, breads, and other pastries. It also sells chocolates, caramels and ice cream.

"The true thrill in visiting Machine Shop, though, is in not limiting your order — walk down the line of pristine pastries, pointing at and choosing every one, and watch with joy as your to-go box fills up," wrote Philly Eater Editor Dayna Evans. "French patisserie can come with a side of exclusivity but not here; Machine Shop embodies high standards of excellence without any of the pretension. It's just how we do things in Philly."

Though Machine Shop opened its brick and mortar shop in January, the business was founded in 2017 by Riddell and her former business partner, Katie Lynch. The two sold pastries wholesale to coffee houses across the city, raising money to open their own storefront. When the COVID-19 pandemic hit, the bakers lost their regular orders and were forced to shift to a pop-up model to make ends meet.

During that time, Lynch decided that she didn't want to move forward with a retail shop, and Riddell went solo. Riddell, a 36-year-old veteran of the city's restaurant scene, has worked under Stephen Starr at the former Le Bec Fin and held previous restaurant jobs in California. In the year leading up to the opening of Machine Shop, Riddell was on staff at Barberet Bistro & Bakery in Lancaster.

Machine Shop's location in the Bok Building brings the business full circle to its beginnings. As a wholesale operation, it had a kitchen on the building's fourth floor. The bakery is aptly named given it is located in the former auto body shop of the vocation school that the Bok Building once housed.

The 20-seat bakery includes a custom-built counter, stools and large pastry cases from Brian Christopher, a furniture designer who previously operated out of the Bok Building.

"As with many other businesses in this city's tight-knit food scene, Riddell's extraordinary boulangerie is a community effort, with furniture made by friends and branding by her favorite tattoo studio," Evans wrote. "It's not uncommon to see people at Machine Shop working on laptops while munching apple danishes, as well as parents with their kids covered in croissant flakes."

In September, Riddell was named one of America's best new chefs by Food & Wine magazine. In its review, Food & Wine noted that Machine Shop had some of the best croissants in the world, lauding Riddell as a "lamination savant" for her ability to know how butter is going to react with flour at any given moment.

Machine Shop's recognition by Eater puts the boulangerie in the company of a long line of Philly restaurants that have made the list over the years. In 2021, Olde Kensington pizzeria Eeva was named one of the 11 best new restaurants in the country. Musi, the recently-shuttered South Philly BYOB, made the list after its opening in 2019.

Machine Shop is open Thursdays through Sundays from 9 a.m. to 2 p.m. It is located at 1901 S. Ninth St., with an entrance on Dudley Street.