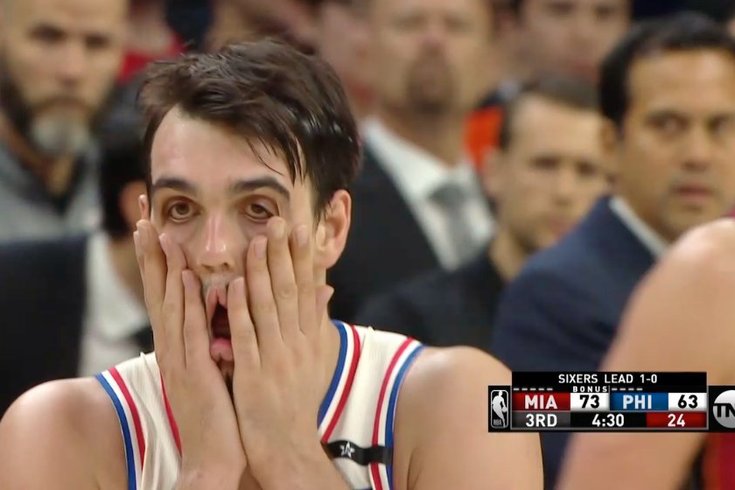 In the third quarter of the Sixers' disappointing loss to the Miami Heat in Game 2 of their first-round playoff series, Philadelphia forward Dario Saric was called for an offensive foul while fighting for the ball.

Saric, who had a rough night shooting from distance but helped lead an ultimately unsuccessful late-game comeback, was not pleased.

In apparent disbelief, he placed both hands on his cheeks with open palms, dragging the skin of his face downward to form an expression that summed up the Sixers' night pretty succinctly.

Is this the face of a man who got a call? pic.twitter.com/xVVshKIyEm

There was something mesmerizing about the expression. As PhillyVoice's own Matt Mullin pointed out, Saric's face looked a lot like the mask worn by Ghostface from the "Scream" movies.

Others noted that Saric bore a striking resemblance to the figure in "The Scream," the famous 1893 painting from Norwegian artist Edvard Munch.

And of course, Saric's expression reminded some of Macaulay Culkin's aftershave scream in "Home Alone."

While Saric has provided us all with a timeless meme, here's to hoping we see a happier Homie throughout the playoffs.

Rollin' with The Homie.

Sixers making themselves known in this game as they hold a 71-64 advantage now against the Nuggets. pic.twitter.com/0yaVdEGFbN