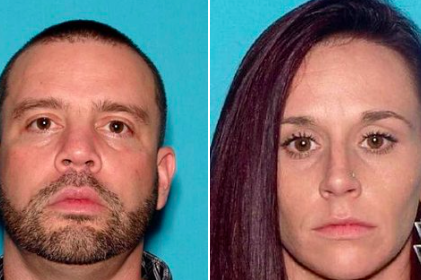 Nicholas Layton, 39, and Rebecca Wills, 33, of Mount Holly, face multiple drug charges after they evaded police for more than a week. Investigators said they seized methamphetamine and cocaine from the couple, who were considered armed and dangerous.

A Mount Holly couple on the run for more than 10 days were arrested Sunday with large quantities of methamphetamine and cocaine, New Jersey State Police said Monday.

Nicholas Layton, 39, and Rebecca Wills, 33, were considered armed and dangerous after authorities raided Layton's home last month and found five assault rifles, according to investigators, who said homemade explosives also were found at the residence.

State police warned the public to be vigilant as a manhunt for the couple was launched with assistance from federal investigators.

Detectives determined that Layton and Wills had been staying at a residence in Evesham Township, Burlington County. Authorities located and arrested the couple.

Officials seized more than five ounces of methamphetamine, half a kilogram of cocaine and more $2,000 in cash.

Layton and Wills are charged with drug possession, intent to distribute and endangering the welfare of a child, according to authorities.

Both defendants are being held at the Burlington County Jail pending a detention hearing, authorities said.