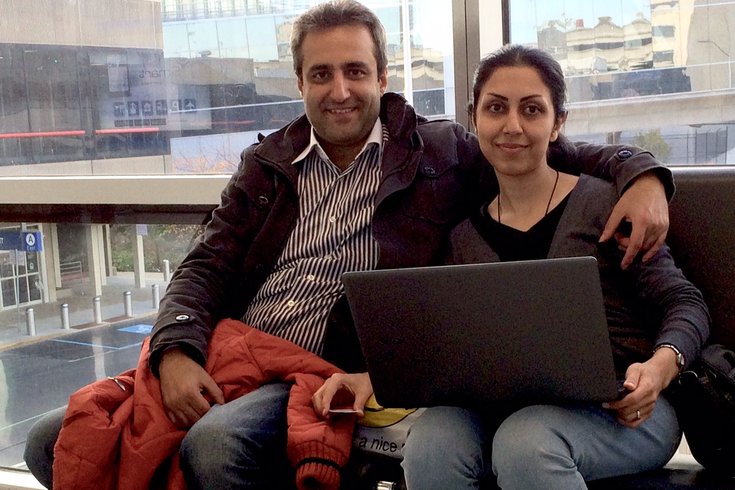 Babak Aslani, a metals engineer, and his wife, Galnaz Shemirani, a software engineer, flew to America for the first time Tuesday. They plan to build a new life here in America.

Highly-educated and trained engineers whose dreams and careers had stalled in their native Iran.

Immigrants, the couple came to America with a plan to start over, find fulfilling jobs that use their skills, to finally start a family.

Like the millions of Americans who’ve come before them, these economic refugees came in search of a better life.

But unlike the millions that came before them, though increasingly like the face of those new immigrants hoping for a better life in America, they are Muslim.

And they know, especially in light of the recent Islamic terrorists attacks on Paris and Mali, their religion may present a special challenge as they work to assimilate in their adopted country. Many of the Republican presidential candidates have talked of excluding Islamic refugees from Syria, the operational heart of the Islamic State of Iraq.

The married couple, Babak Aslani, 37, and Golnaz Shemerani, 32, were bone-weary from a more-than-12-hour flight out of Doha, the capitol of Qatar.

They’d landed just two hours before, the phone number of relatives on a slip of folded paper, their plans on a laptop, their belongings at their feet.

Awaiting a flight to California sitting in Terminal A, the overseas hub of PHL, they were both quietly excited to finally be in America, a place they’d dreamed about for years.

Iran is wracked with inflation, the value of the dollar increasing three times the value of a rial in just a few years.

The Iranian economy is in turmoil, with unemployment stuck around 12 percent for years and projected to stay that way.

The United States, a country they had never been to before, but know lots about, despite decades of official enmity between the two countries’ governments, beckoned them.

Both used the same phrase, smiling: They were here for the American Dream.

“I want to find a good job,” said Alsani, a metals engineer by training. “That’s my dream.”

“I want a good life in America,” said his wife, a software engineer.

The pair knew America because it had already welcomed their relatives, who live in Orange County, California, their ultimate destination.

“Islam is not a frightful religion. It is a peaceful religion, like other religions....People misuse religion. The terrorists misused religion.” – Babak Aslani, metals engineer

Aslani shakes his head when asked about the terrorist attacks and continuing threats in Europe.

“Islam is not a frightful religion. It is a peaceful religion, like other religions,” he said, then he paused.

But then he adds an insight about the rise of terrorism, beginning with Iraq, a rival to his native country.

“Terrorism is an American problem. It begins with America.

“America went to Iraq to get rid of (Saddam) Hussein. But then America left Iraq, left with no one powerful in charge,” said Aslani.

And the vacuum left in the Middle East when America pulled out of Iraq – engineers understand vacuums – helped foster terrorism, he said.