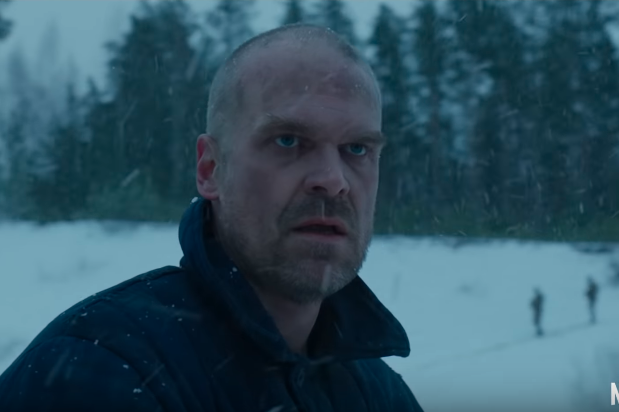 Netflix released the first teaser trailer for 'Stranger Things' Season 4 and Jim Hopper (David Harbour) is officially back. Though, as the series creators point out, he's not doing all that well as a Russian prisoner.

The first look at “Stranger Things” Season 4 is here – and, oh boy, does it reveal a major spoiler.

A teaser released Friday begins with a group of Russian prisoners working on a train track in the middle of winter. The camera then pans to reveal everyone's favorite sheriff. That's right! Jim Hopper is alive!

Most people had their suspicions that the beloved character was still living.

At the end of Season 3, an explosion occurred in an underground Russian facility, perhaps killing Hopper, played by David Harbour. But the scene left his fate in the air.

Then in a post-credit scene, two soldiers walked by a door at the Russian facility and one of them said, "No, not the American." It wasn't clear who the American was, but fans had theorized that it was Hopper.

Well, the series creators, Matt and Ross Duffer, have now confirmed that he's alive ... though, perhaps, not well.

“Although, it’s not all good news for our ‘American.’ He is imprisoned far from home in the snowy wasteland of Kamchatka, where he will face dangers both human … and other," they said in a statement. "Meanwhile, back in the states, a new horror is beginning to surface, something long buried, something that connections everything …”

With production for Season 4 underway, the brothers added, “Season 4 is shaping up to the be the biggest and most frightening season yet, and we cannot wait for everyone to see more. In the meantime — pray for our American.”

Watch the teaser trailer below.