Philly will miss the northern lights this time, but they may be visible in the months to come 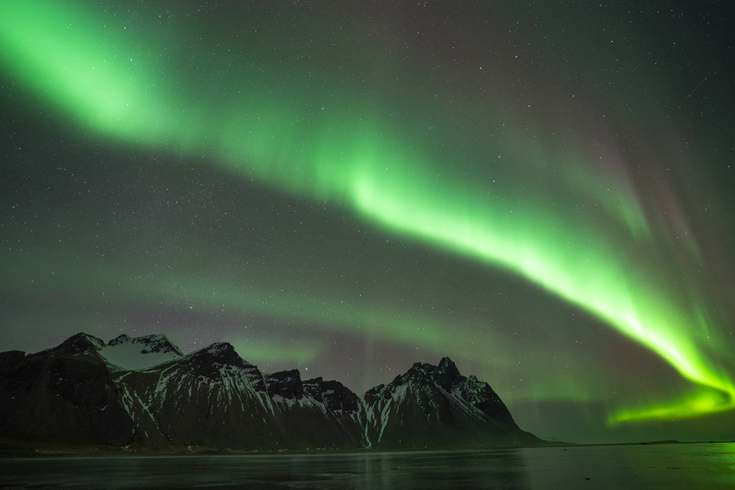 The northern lights typically only can be seen near the Arctic Circle, as shown here over the Vestrahorn mountain in Iceland. But a strong geomagnetic storm may allow portions of the mainland U.S. to glimpse them Thursday and Friday nights.

The northern lights, a wonder typically only seen way near the Arctic Circle, may be visible this week in portions of the mainland United States thanks to a strong geomagnetic storm.

Northern areas of Pennsylvania and New Jersey have a chance of the seeing the natural spectacle, known scientifically as aurora borealis, but it's unlikely to be visible in the Philadelphia area.

"There's a geomagnetic storm headed our way that could be strong enough to produce aurora as far south as Philadelphia, but the peak of that storm is unfortunately forecasted to arrive before sunset (Thursday)," NASA Solar System Ambassador Tony Rice told NBC10. "Still you may notice a green cast to the northern horizon. What you are seeing there is auroral activity much further north, probably over Canada."

Geomagnetic storms occur when a coronal hole on the sun causes high winds that trigger coronal mass ejections, or CMEs. A CME can fling plasma and pieces of the sun's magnetic field into the Earth's atmosphere.

This geomagnetic storm began Wednesday. Its intensity is expected to peak Thursday, but the storm will continue Friday, according to the National Oceanic and Atmospheric Administration's Space Weather Prediction Center.

People who are in an area where the northern lights may be visible are advised to pick a spot with little light pollution, get to a high elevation, check the forecast for sky-blocking clouds or precipitation, and then scan the skies.

The aurora can appear from all directions. Typically when appearing in the U.S., it looks like a green glow on the northern horizon, rather than the image of swirling colors overhead that people may be expecting.

An aurora is a natural light display shimmering and shifting gently in the sky in colors such as blue, red, yellow, green and orange.

The phenomenon begins when electrically-charged particles, called ions, stream from the sun's surface, creating solar wind. Without its magnetic field, Earth likely would have its atmosphere blown away by solar wind, making the planet unlivable.

Though most solar wind is blocked by the magnetosphere, some of the ions become trapped briefly in ring-shaped "holding areas" around the Earth, located near the Earth's geomagnetic poles, which mark the magnetic field's axis. The ions collide with oxygen and nitrogen atoms in the planet's atmosphere. The energy released during these collisions causes the colorful, flowing halo of the aurora. Stronger solar winds cause the auroras to become more active.

Due to the location of the ion holding areas, auroras are visible almost every night near the Arctic and Antarctic circles – the northern lights are called aurora borealis and the southern lights the aurora australis. The lights usually only appear in the lower polar regions, making it quite rare that they possibly could be seen in the mainland United States.

Though likely Philly won't see the subtle greens of the aurora borealis this time around, Philadelphians should never say never. Rob Steenburgh, a space scientists with the National Weather Service, told the Inquirer that the city may have a shot at glimpsing the lights in the months to come due to the sun's increasing solar cycle and winter's longer nights and clearer skies.