Chef Tevon Tyrell will be serving beef patties and coco bread at the sandwich shop from 3 to 5 p.m. on Sunday 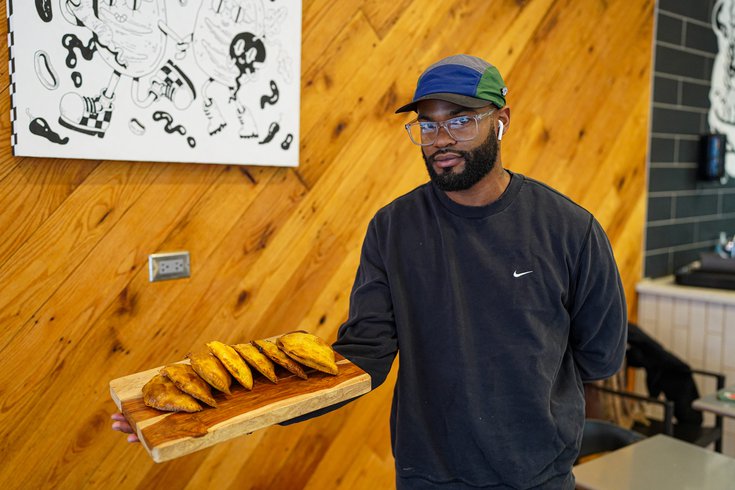 Jamaican beef patties and coco bread will be available at Huda, a sandwich shop at 32 S. 18th Street in Center City, as part of a pop-up on Sunday. The project is the brainchild of one of the restaurant's cooks, Tevon Tyrell, who is doing it as part of his Hummingbird Island brand.

As Philadelphia hunkers down for some of the coldest weather it's had so far this winter, one cook is planning to bring warm Caribbean flavors to the city this weekend.

Hummingbird Island brand, a pop-up project from chef Tevon Tyrell, will be serving Jamaican patties and coco bread from 3 to 5 p.m. on Sunday at Huda, a sandwich shop located at 32 S. 18th St.

The patties, which are similar to empanadas, will be available in several different flavors including beef, beef and cheese, curry chicken and veggie.

Tyrell will also be making patties filled with both callaloo, a leafy green popular in the Caribbean, and salted cod, which is known as saltfish in Jamaica. The latter makes up half of the island country's national dish, ackee and saltfish. Ackee is a fruit native to West Africa which is similar to the lychee.

Additionally, coco bread – a Jamaican staple prepared with coconut milk – can be added to any order of patties for $2 a piece.

Tyrell, whose parents are from Jamaica, grew up in New York City but has for the last seven years been making a name for himself as a cook in Philly. He has worked at some of the most popular restaurants in the city, including Abe Fisher, Serpico and Condesa.

"Jamaica is a place of beauty, and I miss the essence of the island, the people and the culture," the 27-year-old said. "Creating this cuisine was a way to not only honor my parents and grandparents, but all those who came before me.”

He first became interested in food when watching cooking programs as a child. As he got older, he worked to perfect his skills as a way to bring his family members together in what he called a "dysfunctional" household.

Tyrell's boss Yehuda Sichel, who owns Huda, endorses both the young cook and his food.

​​“These Jamaican patties are delicious, so I’m very excited for him to introduce these to Philly," Sichel said. "It’s definitely a cuisine that is lacking in Philadelphia, so I hope that people begin to notice his talents."