The incumbent says he's reduced the prison population and overturned wrongful convictions; the Republican challenger promises a plan to deal with the city's gun violence 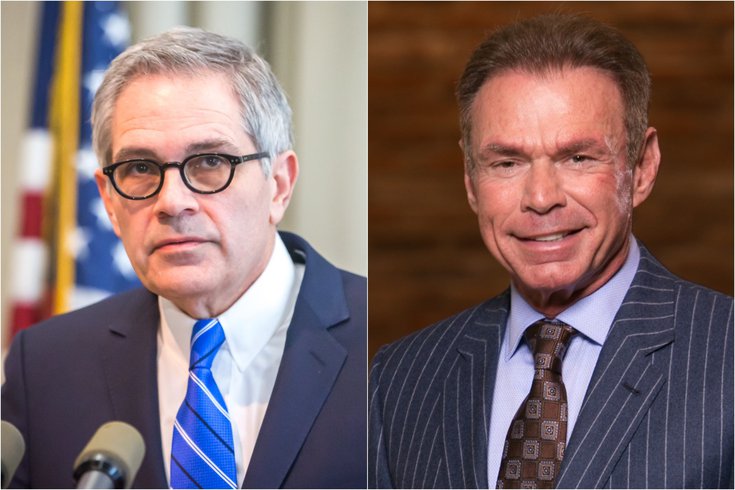 Philadelphia D.A. Larry Krasner, left, is seeking a second term when he takes on Republican Chuck Peruto, right, in the Nov. 2 election. Krasner's progressive reform agenda has been undermined by the surging gun violence in Philadelphia, a point that Peruto's campaign has not overlooked.

Philadelphia District Attorney Larry Krasner is vying for a a second term in office on Nov. 2, when he'll face an election day challenge from longtime criminal defense attorney Chuck Peruto.

Krasner rolled to the Democratic nomination in May when he defeated challenger Carlos Vega in a low-turnout primary election, garnering more than 66% percent of the vote. A former homicide prosecutor in the D.A.'s office, Vega had run a police union-backed campaign that hammered Krasner for the epidemic of gun violence that has accelerated in Philadelphia during the coronavirus pandemic.

Peruto, a former Democrat and a prominent defense attorney, ran unopposed as a Republican in May, following a similar playbook of panic about public safety in what is shaping up to be a long-shot bid to unseat the incumbent.

Ahead of the primary, the tone of public debate left some room for doubt about Krasner's job security against Vega. The lopsided math of Philadelphia's 7-to-1 Democratic voting base has largely made the November election against Peruto a formality, even if many of the questions surrounding Krasner remain unchanged.

The last Republican to hold office as Philadelphia district attorney was Ronald D. Castille, who resigned during his second term in 1991 to run for mayor.

After a heated, televised debate between Krasner and Vega in the spring, Peruto couldn't even get Krasner to give him the time of day when the challenger sought a similar forum. Krasner called the idea a "waste of time," prompting Peruto to fire back and call Krasner a "coward," while simultaneously blasting the Republican party for abandoning the city by failing to invest in his campaign.

Krasner's election in Philadelphia four years ago heralded a wave of progressive district attorneys who championed reform-minded agendas in cities around the United States.

In Philadelphia, Krasner uprooted veteran prosecutors from the D.A.'s office, including Vega, and built a staff that has been tasked with addressing systemic flaws. The emphasis of Krasner's first term has been prioritizing equity and accountability in the criminal justice system, from reversing wrongful convictions and reducing the prison population to curtailing cash bail, limiting the practice of civil asset forfeiture and scaling back prosecution of minor offenses.

On many of Krasner's campaign promises, his progressive base doesn't believe he's gone far enough. His critics, meanwhile, contend that the downstream effect of his reform agenda has been higher rates of violent crime and emboldened criminals who don't fear consequences in Philadelphia.

Krasner's campaign website touts a number of accomplishments made during his first term, including a reduction of the city's prison population by 40% – which puts it at its lowest level since 1985. The campaign also points to a concerted effort at the D.A.'s office to keep juvenile offenders from being tried as adults. In addition to steering more young offenders toward diversion programs in felony cases, Krasner's office has reduced out-of-home placements of children by over 80% during his first term and shifted heavily toward a restorative justice model for juveniles.

Some of the strongest praise Krasner has received points to the work done by his Conviction Integrity Unit, which has helped win the exonerations of 18 people who had been imprisoned due to wrongful convictions. Krasner's unit worked to secure the release of Walter Ogrod, who spent 28 years behind bars for the unsolved 1988 murder of 4-year-old Barbara Jean-Horn, and also helped clear the name of Anthony Wright in the 1991 murder of an elderly woman in North Philadelphia. Wright spent 25 years in prison for crimes he didn't commit and received a $9.85 million settlement from the city.

The investigation into the conduct of several Philadelphia police detectives, who were involved in cases that resulted in wrongful convictions, ultimately led to criminal charges being filed against them this summer.

What Kranser's office has not been able to shake is the alarming rise in shootings and homicides in Philadelphia during his time in office. The city recorded 499 homicides in 2020, up from 356 the previous year, and already has reached 450 homicides in 2021. The police department has reported more than 3,300 shooting incidents and 1,800 shooting victims this year, both statistics are ahead of last year's unsettling pace.

"Do you think Larry Krasner has some secret plan to deal with gun violence?" Peruto asks in a campaign ad. "He's keeping his fingers crossed."

Much like Vega did in the primary, Peruto, 66, has focused on the conviction rate for gun crimes during Krasner's first term. Krasner's office claims that rate is near 85%. His opponents contend this isn't an accurate reflection of the numbers, as an increasingly high percentage of gun cases have been withdrawn or dismissed.

In the spring, Krasner, 60, argued that such statistics do not fully account for the ways in which the D.A.'s office, the police department and the courts all interact in the criminal justice system. In effect, Krasner interprets these criticisms of his office as political scapegoating for larger problems that his office's reform efforts hope to address.

Along with City Council, the D.A.'s office has invested millions of dollars into violence prevention programs over the past year. A report from the office of City Controller Rebecca Rhynhart found earlier this year that only a small portion of these funds are for immediate interventions, as opposed to long-term anti-violence strategies.

Peruto's campaign, much of it self-financed, has been marked by a number of odd moments this year.

The strange "The Girl in My Bathtub" entry on his campaign website – a preemptive damage control move that has since been removed – explained the circumstance in which Julia Law, a 26-year-old former paralegal, was found dead at his home in 2013.

Peruto had been dating Law for a short period before her death and was on vacation in Avalon when she died. He was not implicated by law enforcement and the investigation determined Law likely died from alcohol intoxication and drowning, possibly complicated by a seizure.

Peruto also released a YouTube campaign video in February, before the primary, in which he spoke uninterrupted for nearly 35 minutes and awkwardly proclaimed, "I understand Black people just about as well as a Black person."

But beyond Peruto's quirks, his platform calls for an idiosyncratic mix of moderate policies and others that seek to roll back Krasner's more progressive stances, including Krasner's outright avoidance of seeking the death penalty. On the question of police reform, Peruto has attempted to strike a balance between the need for internal change and making assurances that law enforcement will have greater support for crimefighting.

"We must begin to change the culture of our police department starting at the police academy, on up the line," Peruto writes on his website. "However, no police officer will be prosecuted by me where I have to resort to second guessing and Monday morning quarterbacking for a decision they make. If their decision is justified under the circumstances, they have no fear of prosecution."

Peruto has made a case for vastly expanding the power of the district attorney, up to and including oversight of the Philadelphia Police Department – rather than leaving that authority to the mayor's office – and the selection of a group of judges who would focus entirely on gun-related cases. These are not areas where the district attorney currently holds such sway, but Peruto's slim chance of victory has given him leeway to adopt a number of viewpoints that he has freely admitted will lose him votes.

In a quiet year for municipal elections in Philadelphia, it doesn't appear Larry Krasner will be facing formidable opposition at the ballot box. But another four years in office undoubtedly will come with an expectation that Krasner's philosophy starts to deliver a measurable impact in reducing Philadelphia's violent crime.